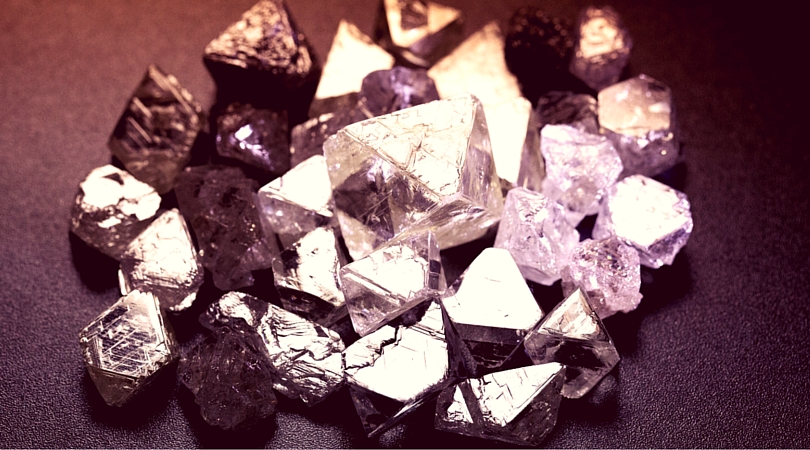 Roughly speaking , there are two types of diamonds: those that are produced ethically and those that are not, the latter termed blood diamonds. Blood diamonds are those diamonds mined in areas of conflict or dictatorships, the revenues used to mine armies, insurgents, dictators or warlords, most commonly in Angola, the Ivory Coast, Sierra Leone, Zimbabwe and the Central African Republic.  Ethically produced diamonds are those diamonds produced in mines in Canada, Namibia, Batswana, South Africa and precious stones like sapphire in Australia and Malawi.2

The problem that exists, therefore, is stopping the flow of blood diamonds and although the world has adopted the Kimberly Process Certification Scheme (2000) in order to block sales of blood diamonds, also known as conflict diamonds, the actual ability to know the point of origin of a diamond, and whether it was ethically produced or not, is a bit difficult. Further, the Kimberly Certification has recently allowed for the purchase of blood diamonds from countries such as Zimbabwe, even though it is clear that these diamonds are not ethically produced. Economic and political pressures have won the day.

The problem is further exasperated. Once Antwerp had been the major cutting and polishing center for diamonds, and would not have imported Zimbabwe’s diamonds no matter the hypocrisy of the Kimberly Certification (the United States and some other countries ban Zimbabwe diamonds despite the Kimberly Certification). Other countries like India do not ban the export of Zimbabwe diamonds. Interestingly, the diamond business of Antwerp, almost an exclusively Orthodox Jewish establishment, has been largely taken over in recent years by non-Jewish immigrants from India.

As such, the Indians today control much of the diamond industry, being strategically situated in Antwerp and Surat, with open trade routes to New York, Hong Kong and Dubai, the largest centers of diamond commerce in the world.

Surat, India, has become the largest diamond cutting and polishing center in the world. The city is regulation free, full of cheap child labor, and takes no responsibility for the illness known as “diamond lung” or other respiratory illnesses stemming from the inhalation of very small diamond particles. It is estimated that over 500,000 thousand people in Surat work in the diamond cutting and polishing stages of the diamond preparation process. Worse, once these diamonds have been strategically cut and polished, it is almost impossible to know their point of origin; as such, it is entirely possible that blood diamonds make their way to the American market in great numbers.  As the Brilliant Earth website explains, Surat has become the place “where blood diamonds go to forget their past”.

Enter two Stanford University graduates, Beth Gerstein and Eric Grossberg. In 2004 they established Brilliant Earth, a company that designs and produces jewelry made from diamonds that are only ethically produced. In addition, they recycle gold and platinum for their use in their jewelry. Some of the Brilliant Earth diamonds are processed in Israel as well. According to industry sources, Brilliant Earth has shaped the diamond purchase landscape in important ways, leading as well to a greater level of consumer sensitivity to the issue of conflict versus ethically produced diamonds. JCK magazine, a leading diamond industry publication, named Eric Grossberg as one of the young and influential industry entrepreneurs.

Furthermore, the company actually donates five percent of its profits to aid those impoverished by decades of cruelty, war and slavery in the very areas where blood diamonds are produced.

Further, as the diamond industry is a multi-billion dollar business, it is highly probably that blood diamonds are regularly traded with the disguised blessings of the industry. Brilliant Earth painstakingly goes against the grain to assure that its diamonds or precious stones are tainted in any way by the oppression of others.  Actually, they are most vociferous in their stance. One of their managers, Greg Krauss, has published an important and fascinating article about the realities of the diamond industry and how Brilliant Earth disassociates themselves from practices that may be legal, but are absolutely unethical.

Brilliant Earth has centers for land restoration and medical aid in Sierra Leone, community centers and activist groups for the prevention of child labor in the Congo, and has established avenues for human rights education in Angola. These are only a few of their projects. By empowering communities from the bottom up, they believe that they can make a difference.

As Gerstein says, her goal is to “transform the jewelry industry by demonstrating transparency, responsibility and compassion.” Quoting Margaret Mead, Gerstein adds, “Never doubt that a thoughtful, committed group of citizens could change the world. Indeed, it’s the only thing that ever has.”