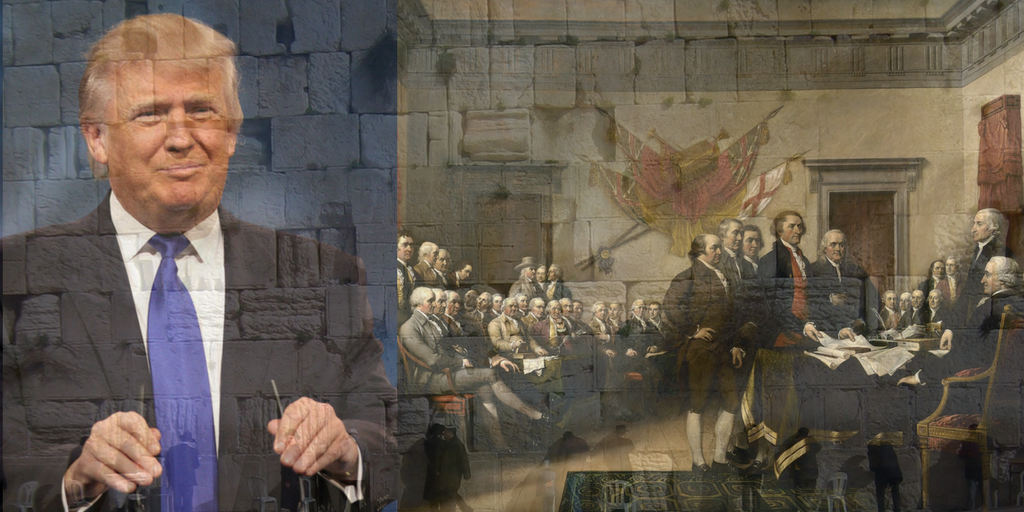 Today is the day.  The unlikely rise of Donald Trump, from building mogul, reality TV Star to the highest office in America has been the story of the past year.  Pundits counted him out, the left thought he was a clown, and his own party wanted nothing to do with him. Yet, he succeeded in a near miraculous fashion.

Jewish history is ripe with unexpected events, historical anomalies, and non-Jewish political leaders lending a hand to help push the long march towards redemption.  It is not lost on anyone that Trump’s rise is more than just about a flamboyant entertainer unexpectedly rising to the top.  Trump’s daughter and son-son-law are both observant Jews who support Israel in an unwavering fashion.  Some of Trump’s closest friends are both orthodox and highly supportive of Israel’s permanent return to all of its historic homeland.

While all of the above makes a Trump Presidency truly historic for those who support the Jewish return to all of the nation of Israel’s ancestral homeland, there is something far deeper going on.

The Founding Fathers of America understood that there is a Creator to all things; an active G-d which is involved with the history of the world.

“We hold these truths to be self-evident, that all men are created equal, that they are endowed by their Creator with certain unalienable Rights, that among these are Life, Liberty and the pursuit of Happiness.”

By naming the Creator as the source of our rights Jefferson was hooking the destiny of America with that of the Bible.  The Founder Fathers believed their destiny was so bound up with the Hebrew Bible that there were those among them that wanted to make Hebrew the official language of America.  Afterall Adams and others were considered to be Hebraists, which was a movement that sought to reconnect Christianity to its roots in Judaism.

The final redemption is about mankind recognizing that the Creator and his Torah are the source and building blocks for all.  Trump may not be politically correct.  He may be thrice married and expresses himself in a way liberals scoff at, but he understands the roots of America’s greatness.  This greatness unlike its European counterparts, is America’s connection to the G-d of Israel, which goes back even before the Declaration of Independence.

While Europe has done everything in its power to rid itself of Christianity’s Hebrew roots, America has done the opposite and embraced them.

Eisav’s Head is Burried with the Patriarchs

There is a midrash (tanaic story from the time of the Mishna) that relates to Eisav coming to the Cave of the Patriarchs when Jacob’s sons come to bury him. Chushim the son of Dan quickly lobbed his head off.  The head rolled into the cave and is buried with Israel’s patriarchs and matriarchs.

The sages of the Torah teach that Rome is the expression of the exile of Eisav in the world.  Rome became Christian and spent centuries attempting to sever Christianity from its source. Now at the End of Days, the midrash makes more sense than ever.  Eisav’s head was always “kosher,” while his body, not.  America has a unique role in reconnecting “the head” of Eisav to its Israelite source while disconnecting it from its pagan influence, which is drawn from the decadent liberal culture flowing from the main stream media, Europe, and American universities.

The battle between Israel and the world is far more to do with reaffirming a direct connection to the G-d of Abraham, Isaac, and Jacob and spreading their teachings to the world.  Far too many Jews have forgotten that this is Israel’s mission. Ironically, Americans understand that they too can share in this mission by lending a hand to the Jews that do embrace the covenant of their forefathers.

On a subconscious level, this is what angers those who oppose Trump. At a base level they desire to break America’s bonds with its Hebrew roots, because they themselves are fearful of the responsibility such roots carry with them.

At the End of Days, just before the Redemption as Israel returns to its Land, the prophecies are unfolding as written. There is another midrash that clearly states: Eisav will return the Crown of Torah to Israel. It does not say Israel will take its crown, but rather it will be returned to it, connotating a partnership.

Trump and America appear ready to stand up to the global elite and fulfill the USA’s mandate to be a partner in redeeming Israel and all of mankind, that is if those that oppose the new President don’t try to uproot the source of its wellbeing first.