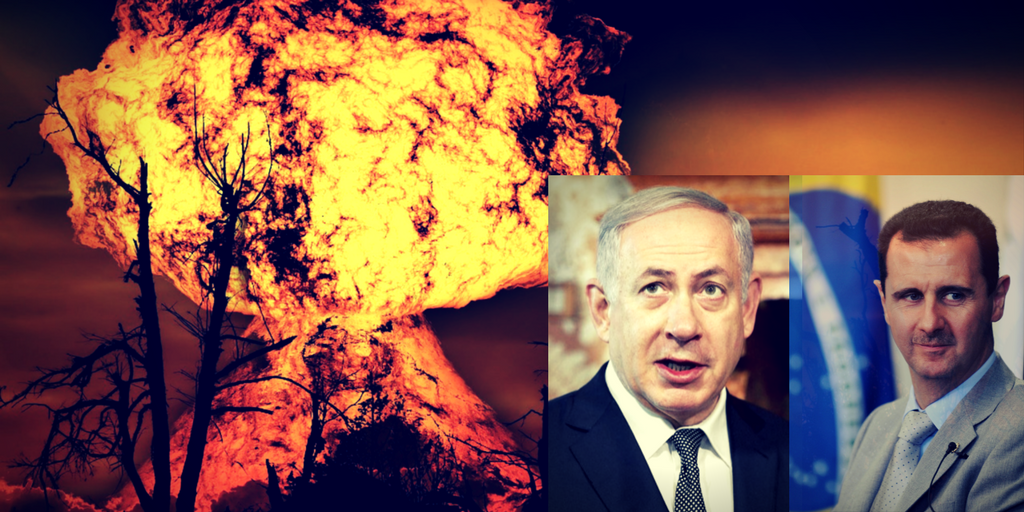 “The action of discouraging an action or event through instilling doubt or fear of the consequences.”

–The Oxford English Dictionary entry on the word “Deterrence.”

“…the lack of minimal territorial expanse places a country in a position of an absolute lack of deterrence. This in itself constitutes almost compulsive temptation to attack Israel from all directions. Without a border which affords security, a country is doomed to destruction in war.”

For anyone who needed it, this week’s horrific chemical airstrike on civilians in Northern Syria provided a jarring reminder of the merciless realities that prevail throughout the Arab world — and of the fate Israel and her citizens would be subject to, were it not for the military might of the IDF.

Of course, apart from the means used to perpetrate the latest atrocity, there was nothing really exceptional about it. According to the latest estimates, only a few dozen people (100-150) were killed, a mere fraction of one percent of the fatalities incurred in the ongoing Syrian civil war, in which hundreds of thousands have been slaughtered with unspeakable brutality (beheadings, immolations, disembowelments, dismemberments…).

But, of course, such barbarism is not confined to the Syrian theater. Across virtually all the Arab world, bloodcurdling waves of indiscriminate killings have repeatedly ravaged entire countries. As the perversely named “Arab Spring” dramatically underscored, nowhere else is the brutal bestiality of Hobbesian anarchy — as the natural state of the human condition — more vividly demonstrated than in the Arab world.

In stark contrast to Eastern Europe (with the exception of the former Yugoslavia), where the downfall  of despotism led fairly rapidly to a relatively orderly transition to democracy, wherever the restraining “cork” of Leviathan tyranny was removed in the Arab world, violence and bloodshed have swept away any semblance of civil order.

Invariably, whenever vent was given to vox populi, the result was mob rule.  In Egypt, the election of the Muslim Brotherhood brought a noxious mixture of domestic repression, the breakdown of law and order and economic meltdown, only halted — albeit tenuously — by the re-instatement of strict authoritarianism.

Tightening the iron grip of tyranny

In other places, such as the allegedly “moderate” medieval monarchy of Saudi Arabia — author of the much-vaunted “Arab Peace Initiative” — the rule of law is only maintained by the tightening of the iron grip of tyranny. As written in a New York Times editorial, titled “Saudi Arabia’s Barbaric Executions“: “The regime has become only more repressive in the years since the Arab Spring.”

This recrimination followed an earlier editorial, “Saudi Arabia’s Execution Spree,” in which — with slightly greater hyperbole — the “paper of record” reported with alarm: “Saudi Arabia’s justice system has gone into murderous overdrive…” The Times warned that many of those “scheduled for imminent execution on terrorist charges…are citizens whose only crime was protesting against the government,” adding ominously that “[t]his wave of killing has prompted some to compare Saudi Arabia to the Islamic State.”

Reminding its readers of the real nature of the desert kingdom, the Times charged: “the executions were not out of character for Saudi Arabia. The country has a dismal human rights record with its application of stern Islamic law and its repression of women and practitioners of religious traditions other than Sunni Islam…the mass execution this weekend followed a year in which 158 people were executed, the most in recent history, largely based on vague laws and dubious trials.”

But for the grace of God…

It is a savagery that is amply reflected in the Palestinian-administered areas, both in Gaza under Hamas and in the “West Bank” under Fatah.

Curiously, this is somehow never realistically factored into the chronically short-sighted policy proposals Israel is pressured to accept in the typically ill-conceived efforts to end the Arab-Israeli conflict.

The horrendous potential inherent in this endemic myopia is perhaps most starkly illustrated by the Syrian example.

Up until the outbreak of the 2011 civil war, many — including then-US Secretary of State Hillary Clinton — were still referring to the internet-savvy,  British-educated eye doctor, Bashar Assad as a moderate “reformer” who could be a credible peace partner for Israel. A veritable chorus of enlightened, erudite voices urged an Israeli withdrawal from the Golan Heights in a land-for-peace deal with Damascus.

Today, in view of the gruesome events that have transpired since then — with Assad morphing from reformer to war criminal — it is chillingly clear what a huge error that would have been.

If, on the one hand, the anti-Assad forces prevail, Israel would almost certainly face the unpalatable prospect of Jihadi forces — associates of ISIS or Al Qaeda (or both) — deployed on  the Golan Heights, overlooking the city of Tiberias and commanding the Galilee. If, on the other hand, the pro-Assad forces prevail, Israel would, with similar certainty, face the no more palatable prospect of pro-Iranian Hezbollah forces — or even detachments of Tehran’s Revolutionary Guards (IRGC) itself — deployed there.

This is the grim reality that, but for the grace of God, Israel would be forced to confront today had the proponents of land-for-peace carried the day…

Failure to internalize lessons of past

Yet despite the inescapable lesson that the Syrian episode provides regarding the enormous perils entailed in relinquishing territory, it seems that inexplicably, nothing — literally nothing — of what should be learned from it has percolated into the consciousness of the decision makers-dealing with the “peace process.”

Had the land-for-peace advocates prevailed on the Palestinian front, it is more than likely that Israel would be facing a prospect similarly perilous to the one it would be facing had it withdrawn from the Golan in pursuit of a forlorn hope of peace.

As past experience has repeatedly shown, every time territory has been relinquished or abandoned to Arab control, that territory has – usually sooner rather than later – become a platform from which to launch lethal attacks against Israel. It occurred almost immediately in Gaza, within months in Judea and Samaria, within years in south Lebanon and after several decades in Sinai, a region now descending into the depths of depravity and unspeakable brutality, with no good options on the horizon.

Moreover, every time territory was relinquished or abandoned by Israel, the security situation that developed was far more menacing than that which preceded it. Significantly the only areas from which Israel is not gravely threatened are those which Israel has not yet relinquished in its quest to attain peace, namely the Golan, Judea and Samaria and the Jordan Valley.

Despite the accumulating mountain of evidence refuting its feasibility, despite the repeated failures of attempts at its implementation, despite the glaring flaws in its conceptual rationale, the land-for-peace doctrine (or dogma), and its equally unfounded corollary of  two-states-for-two-people, still dominates the discourse on the Middle East conflict.

Clearly, this is a situation that will baffle historians of the future. They will struggle to understand why such a fatally flawed and failed formula could endure for so long as the dominant paradigm for the resolution of the conflict. They will grapple with the conundrum of why, despite its minuscule chance for success and huge cost of failure, it was a formula that was widely designated “realistic” and “rational”; why despite the daunting perils it entailed, it was considered “prudent” and “pragmatic.”  They will fail to comprehend why so many who professed to be “pro-Israel” obdurately insisted that Israel demonstrate its good faith by exposing itself, time and time again, to absurd risks, and subjecting its citizens to appalling dangers by adopting a policy that has been repeatedly disproven, but somehow never discredited and certainly never discarded.

But perhaps what future historians will find the most baffling of all, is why successive Israeli governments — clearly aware of the grave hazards this formula entailed for their country and their people — never managed to remove it from the discourse and replace it with an alternative Zionist-compliant prescription for a more secure and stable future.

Indeed, there is little doubt that hisorians will deem the fact that such an alternative paradigm did not emerge to replace the two-state proposal to be a catastrophic failure of the Israeli leadership and a tragic testimony to its intellectual impotence and incompetence.

Again, but for the grace of God…

Once control is relinquished, there is little to ensure that its allegedly peaceable Palestinian partner will not be replaced by some less amicable successor – or even if he remains in power, that he continues to honor his commitments in exchange for which Israel relinquished the territory. After all, such violation of commitments may not be the result of bad faith on the part of Israel’s “peace partner,” but due to pressures of influential domestic rivals.

For just as Hezbollah and/or ISIS/Al Qaeda affiliates may well have taken up positions in the Golan, so too, Hamas, Islamic Jihad and/or Salafist elements may take up positions on the highlands of Judea and Samaria — whether in compliance with, or in defiance of, Israel’s “peace partner.”

There will, however, be important differences!

The horrors at hand

Even with primitive weapons, presently available in abundance to the terror organizations in “demilitarized” Gaza, all of the following would be within striking range: virtually all Israel’s air fields – military and civilian – including its only international airport, Ben Gurion; its major sea ports of Haifa and Ashdod, and naval bases; its centers of civilian government and military command; vital infrastructure installations/systems, including power generation and transmission; desalination plants and water conveyance, communication hubs, major transportation axes (rail and road); and 80% of the nation’s civilian population and its commercial activity.

Given the combination of tempting vulnerability and the blatant disregard of Israel’s adversaries for human life so graphically demonstrated in recent years, the horrors, for both Jew and Arab, that are likely to result from any further Israeli withdrawals are not difficult to foresee.

With its hospitals, schools and kindergartens hopelessly exposed to the callous whims of heartless terrorists, Israel would be forced to take massive military action to defend its vulnerable civilian population, whether by preemptive strikes to forestall aggression, or retaliatory operations to deter future attacks. Given the length of the frontier, the nature of the topography and presence of numerous civilian centers together with the robustness of the response required, widespread collateral damage would be inevitable…

This would be the unavoidable chain of events that would certainly emerge from continued pursuit of the land-for-peace dogma.

These are the horrors at hand it would undoubtedly precipitate…