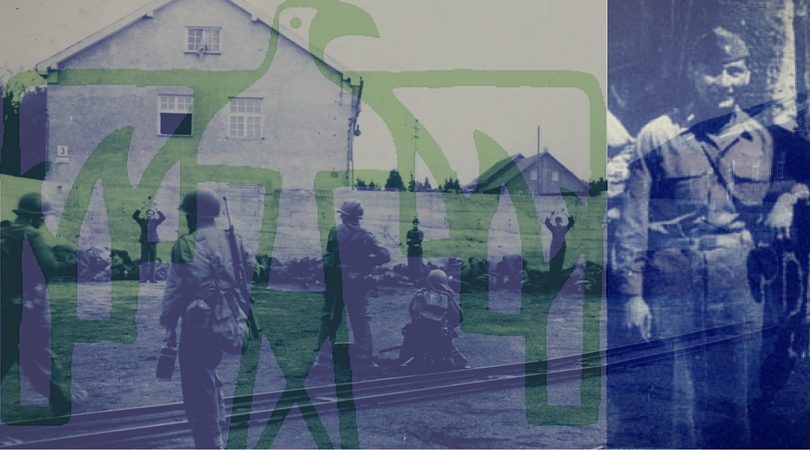 Located in Oklahoma City, the 45th Infantry Division, disbanded in 1968, was originally a part of the Oklahoma National Guard and saw action in both World War II and the Korean War. Composed of soldiers from New Mexico, Arizona, Colorado and Oklahoma the 45th was established in the early 1920s; its soldiers were natural fighters, marksmen and people of the land. Some of them were Native Americans whose families had come to the region from Tennessee and the Carolinas in the brutal Trail of Tears.

During World War II, the division engaged in heavy fighting against the Nazis in Italy, displaying great bravery and resolve, despite serious losses. They would be the first Allied troops to reach the Vatican. After Italy, they entered into France and Germany, capturing several key cities and eventually crossing the Danube River. On April 29th, 1945 the 45th was sent to liberate the Dachau Concentration Camp.

Upon witnessing the horrors of Dachau, soldiers of the 45th mowed down Nazi soldiers who had already surrendered, Cherokee Indian 1st Lieutenant Jack Bushyhead personally ordering the execution of almost 400 SS troops. In the eyes of the Native American soldiers of the U.S. Army, Nazi soldiers in concentration camps were not ordinary enemy soldiers deserving of protection as prisoners of war; they were simply murderers. Those liberated Jewish inmates that still had enough strength to take vengeance joined the 45th in this act. Jews, White and Black Americans and American Indians taking revenge together on Nazis is something that binds. The Jews also killed some kapos. This was not the direct business of the American soldiers, but they did help.

Lt. Jack Bushyhead (left) at the Liberation of Dachau, 1945.

Immediately before entering the Dachau Concentration Camp, the soldiers of the 45th found thirty nine railroad boxcars containing two thousand skeletal corpses and brain tissue scattered about from smashed in skulls. According to eyewitness reports, the battle toughened soldiers were not at all prepared for the sight and, in concert with the stench of decaying corpses, could not hold their emotions back. They vomited, cried and entered a state of rage that cannot be understood by those that have never experienced such horrors.

At that point Nazi tower guardsmen started to shoot on the American soldiers and the fighting resumed, but not in full force. It seems that many of the SS guards, the camp commander and others had fled the camp just before its liberation, leaving hundreds more strewn and tortured bodies for the 45th Infantry Division liberators to find. Still, the Nazis had 560 SS soldiers left in the compound, many of them Hungarian Waffen SS troops, others were inmates of the SS conscripted prison system which was also housed in Dachau.

There is much dispute as to what really happened at the camp, how many Nazi Soldiers were actually killed and under what circumstances. In his 1986 book, Dachau: The Day of the Avenger, an Eyewitness Account, first lieutenant and medical corps office Howard Buechner writes that U.S. forces killed 520 Nazi soldiers, 346 on the orders of the Cherokee Indian, Jack Bushyhead. Other eyewitnesses dispute this and still others confirm.

Alleged execution of SS troops in a coal yard in the area of the Dachau concentration camp during its liberation. April 29, 1945

After the liberation, accusations of war crimes were hurled at the American forces. As such, getting to the truth of the episode is difficult. No matter the true number of executed Nazis, during a United States Army investigation into the occurrences, General George S. Patton dismissed the charges. Deputy Judge Advocate, Colonel Charles L. Decker, wrote: “in the light of the conditions which greeted the eyes of the first combat troops, it is not believed that justice or equity demand that the difficult and perhaps impossible task of fixing individual responsibility now be undertaken.”

What is not denied is that the American soldiers gave guns and tools to the Jewish inmates that still had strength enough to take revenge on the Nazi soldiers still in the complex. And take revenge they did, killing and butchering several Nazis as well as Jewish kapos.

These occurrences, of course, of Jewish inmates taking revenge on Nazi soldiers were never considered immoral or wrong. They were understandable to all, probably to the Nazi soldiers as well as the Jewish kapos themselves.

The question then must be asked. Is it not enough to see and to internalize or must one actually fall victim first? The Cherokee Jack Bushyhead knew oppression and the murdering of innocents in his family from the Trail of Tears, the mid nineteenth century forced walk of several Indian tribes and Black Americans from the Southeastern United States to the Oklahoma territory. It is estimated that approximately 2000-6000 Cherokee Indians died on the vicious and brutal journey.

Having internalized his own people’s narrative, this Native American hero was perhaps doubly moved to act on the pledge: Never Again.