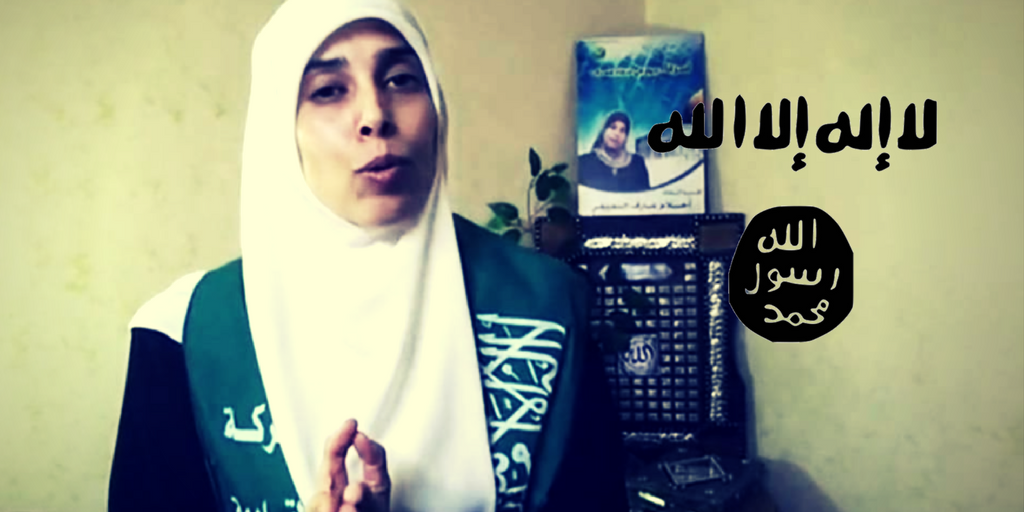 Time to extradite a remorseless killer of American citizens.

And today she is living the good life, as a “journalist,” inciting jihad in Jordan under the protection of the King Abdullah.

On August 9, 2001, in the service of Hamas, Tamimi led a suicide bomber to the Sbarro Pizzeria in central Jerusalem. It was summer vacation. The streets were filled with children and parents.

Sbarro was filled with children and their parents.

Tamimi had scouted out the location of the bombing ahead of time. She chose Sbarro because it was a popular destination for families with young kids.

Tamimi brought the bomber to the restaurant. His bomb, hidden in a guitar case, weighed 5-10 kilos. It was surrounded by nails to puncture the flesh and internal organs of the victims, maximizing their pain and bodily damage.

Fifteen people, including seven young children and a pregnant woman were killed in the blast.

Another 130 were wounded. Chana Nachenberg, today 47, was 31 at the time. She was torn apart by the blast, only to survive, hospitalized in a vegetative state ever since.

Tamimi was sentenced to 16 consecutive life sentences and 15 more years in prison for her crime.

She was released in 2011 as part of the ransom deal Hamas coerced the government to accept to secure the freedom of IDF Sgt. Gilad Schalit. Schalit had been held hostage and incommunicado by Hamas in Gaza since he was abducted from Israel in 2006.

Tamimi, like the other thousand terrorists she was freed with, was not pardoned. Israel’s release was a conditional commutation. The terrorists were freed on condition that they did not engage in either terrorism or incitement of terrorism subsequent to their release.

Dozens of terrorists released under the Schalit ransom deal have been returned to prison to serve out the remainders of the terms over the past five years due to their violation of those conditions.

Immediately upon her release, Tamimi began violating the terms of her commutation by inciting terrorism.

She has been able to avoid returning to jail to serve out the remainder of her sentence because she decamped to Jordan.

From the safety of King Abdullah’s capital city Amman, Tamimi has worked as host of a television program on Hamas’s television station. Hamas television, which exists for the explicit purpose of inciting terrorism and indoctrinating viewers to become jihadists, operates openly in Jordan, as does Hamas.

Indeed, in 2011 King Abdullah decided to embrace the jihadist terrorist group that controls Gaza and is allied with Islamic State and Iran. Hamas leaders have frequently visited Jordan in recent years and the terrorist group is able to openly operate in the kingdom.

Since her release, Tamimi has given countless interviews and as traveled through much of the Arab world, celebrating her act of mass murder. She has said repeatedly that she would commit her children’s massacre again if she could.

Malki Roth was 15 when she was killed. Shoshana Yehudit (Judy) Greenbaum was 31 and five months pregnant.

Nachenberg is also a US citizen.

Earlier this month, the US Department of Justice unsealed a 2013 indictment of Tamimi regarding her role in the murder of US citizens. The Justice Department officially requested that the government of Jordan extradite Tamimi to the US to face trial.

The US signed an extradition treaty with Jordan in 1995. But, as Malki Roth’s father Arnold Roth wrote last week in a blog post regarding the extradition request, since 1997, Jordan has claimed that the agreement was not ratified by the Jordanian parliament.

Based on this claim, two courts in Jordan, including the supreme court of appeals, rejected the US extradition request claiming that it would be unconstitutional to respect it.

Roth scoffed at the argument, noting that in Jordan, the notion of constitutionality is entirely arbitrary.

In his words, “In a monarchy where the king changes prime ministers and governments more often than some presidents change their suits, there’s an inherent problem with paying so much respectful attention to a constitution. Jordanian law, and what is legal and illegal depends on one individual. If [King Abdullah] wanted to extradite her [Tamimi], she would be in the US today.”

And this brings us to Abdullah, and what he wants.

Last week, this column discussed the hero’s welcome that Ahmad Dagamseh received when he returned home from prison. Dagamseh, a former Jordanian soldier, was released this month from Jordanian prison after serving a 20-year term for murdering seven Israeli schoolgirls at the so-called Island of Peace in the Jordan Valley in 1997.

After the column was published, Mudar Zahran, a Palestinian Jordanian ex-patriot and regime opponent who serves as the secretary general of the Jordanian Opposition Coalition wrote to me to highlight the fact that Dagamseh’s release was widely and exuberantly covered by media organs controlled by King Abdullah.

Zahran wrote that an official envoy of Jordan’s Interior Ministry Ghaleb Zohbi greeted Dagamseh at the prison upon his release and that Dagamseh was driven from jail to his village in a Mercedes flanked by a convoy of police cruisers.

Zahran added that the standard practice is for released prisoners to be taken home in a police wagon.

In a subsequent email exchange, Zahran set out his case for replacing the Hashemite minority regime with a Palestinian majority regime.

Zahran argued that the number of refugees in Jordan has been purposely inflated, and that the massive Palestinian majority in the population has not been significantly degraded by the refugee flows from Iraq and Syria over the past decade and a half.

According to his data, which he contends is supported by US embassy in Amman cables published by Wikileaks, there are 6.1 million Palestinians in Jordan. The kingdom is host to 750,000 Syrian and Iraqi refugees.

Zahran accused King Abdullah of deliberately fanning the flames of antisemitism and anti-Americanism among the Jordanian public in order to make himself appear indispensable to Israel and the West.

Dagamseh’s celebrated release, like the regime’s protection of Tamimi and its willingness to permit her to continue to incite jihad against Israel from Amman are examples of this practice.

Abdullah’s notion, Zahran argues, persuasively, is that by giving a microphone to jihadists, Abdullah convinces Israel and the US that they cannot afford to allow anything to happen to him or to his minority regime.

So convinced, Israel and the US say nothing as Abdullah stacks his parliament with Muslim Brotherhood members. They voice no objection as Abdullah empowers Hamas, gives safe haven to terrorist murderers of Israelis and Americans, and rejects extradition requests on fictional constitutional grounds that he himself concocted.

Zahran, who seeks to replace the Hashemites with a Palestinian majority regime, which would allow Jordan to serve as the national home of the Palestinians in Judea and Samaria, argues that Jordan is a state run by the military and intelligence services, which themselves are controlled by the US military’s Central Command.

In his words, Jordanian forces cannot “relocate an armored vehicle” without first getting “permission from US Central Command.”

Zahran’s vision of a post-Hashemite Jordan is interesting. He envisions the US continuing to have overall control of Jordan’s security forces. The new regime would liberalize the economy and stop jihadist incitement while actually targeting jihadists rather than coddling them.

The regime for which he advocates would be dominated by the long-discriminated-against Palestinian majority. It would work with Israel to solve its conflict with the Palestinians. Zahran’s Jordan would restore Jordanian citizenship to the Palestinians of Judea and Samaria and give them voting rights in Jordan.

It is hard to know whether Zahran’s vision of Jordan is a viable one. Certainly it sounds a lot better than what we experience with Abdullah. And it deserves serious consideration.

By the same token, it is time for the US and Israel to test Abdullah, the moderate man we cannot do without.

The first test should be an ultimatum. Abdullah should be told that he must either extradite Tamimi to the US for trial or send her back to Israel to serve the remainder of her sentence. If he refuses, then either Prime Minister Benjamin Netanyahu or US President Donald Trump, or both, should meet publicly with Zahran to discuss his vision for the future of Jordan.