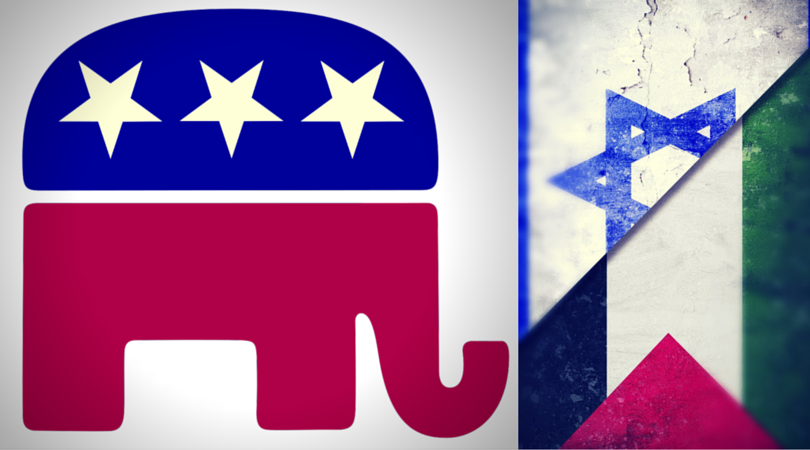 Rejecting decades-old policy, the Republican Party approved on July 12 a [2016] platform that does not include a call for a two-state solution to the Israeli–Palestinian conflict.—Forward, July 10, 2016

We believe the establishment of a Palestinian state on the West Bank would be destabilizing and harmful to the peace process. – 1980 Republican platform that brought Ronald Reagan to the White House.

These three excerpts spanning over a quarter-century relating to the GOPs attitude towards the establishment of a Palestinian state include two important lessons for Israel.

One of these lessons relates to the past; the other to the future.

Israel will ignore either at its peril—or at least, to its grave detriment.

With regard to the past, these excerpts underscore the breathtaking erosion that has taken place since the late 1980s in the GOPs opposition to Palestinian statehood—from utter rejection; to retraction of opposition (1996); to explicit—albeit conditioned—endorsement in 2002.  It is only now that the GOP is setting aside its ill-considered support, and has thankfully begun to revert—albeit it still partially—to its former position.

What makes this spectacular erosion—from un-conditional rejection to conditional acceptance—even more remarkable is the fact that it took place over a period in which for the overwhelmingly greater proportion  of time, the incumbent Israeli government was headed by Likud, which until mid-2009 (Netanyahu’s Bar-Ilan Speech) explicitly opposed the establishment of a Palestinian state.

Indeed, for the twenty-two years (between 1980 to 2002), Likud-led coalitions were in power for about double the time that Labor-led ones were.

This is clearly a grave indictment of the Israeli “Right’s” inability to convincingly convey the validity of its political credo, and to undermine that of its ideological adversaries on the “Left”.

The need for soul-searching

The gravity of this indictment is further compounded by two factors that make it even more damning.

The first is that this dismal outcome emerged despite the highly favorably point of departure, which opponents of Palestinian statehood enjoyed.  After all, no effort was required to win over the GOP to this “rejectionist” position, for it was staunchly behind it to begin with.  Yet despite this, the “Right” was unable to sustain this like-minded support, which by 2002, had for all intents and purposes, been totally eroded.

The second is that this erosion occurred despite the fact that the “Right’s”  opposition to Palestinian statehood was completely validated by facts on the ground – i.e. by the bloody events that tragically arose from the fatally failed attempt to implement it.

So, sadly, the “Right” was not able to marshal the distinct dual advantage it had of a highly favorable point of departure and overwhelming empirical corroboration of its credo to sustain the GOP’s natural inclination to oppose the establishment of a Palestinian state.

This in itself is reason enough for intense soul-searching among “Right” wing activists, but it acquired even greater pertinence and urgency, precisely because of the encouraging signs that  the GOP is reverting—at least, partially and cautiously—to its past position of opposition to Palestinian statehood.

For today, the challenges Israel may have to face in a post-two-state era could well be as dire—perhaps even most so—than those that the perilous two-state paradigm posed.

A word of warning

It is no secret that enthusiasm for the two-state concept is waning—even among ardent erstwhile adherents. Indeed, recently, some obsessive two-staters such as New York Times’s Tom Friedman (February 10, 2016),  New York University’s Alon Ben Meir (Huffington Post, April 7, 2016), and recently the Jerusalem Post’s Gershon Baskin (July 20, 2016)  have acknowledged that, (gasp!), the Palestinians may actually have contributed to the accelerated irrelevance of the two-state idea.

Thus, and without wishing in any way to diminish the sterling efforts of those who helped bring about the welcome change in the 2016 GOP platform, this was, to some extent, as Rafael Medoff points out (Algemeiner, July 20, 2016)  a sober and clear-sighted response to the changing realities on the ground.

Of course, according to conventional wisdom in “Right-wing” circles, the changes in the GOP platform are a development that bodes well for Israel, as it signals growing awareness of the futility and dangers entailed in continued pursuit of the two-state chimera as the only route to a resolution of the conflict with the Palestinian-Arabs.

While this, of course, is undoubtedly true, a word of warning is called for.

With the passing to the two-state paradigm as a relevant policy option, new perils will immediately emerge. Planning on how they should be contended with is a pressing imperative for the Israeli “Right”—and one that, hopefully, it will display greater acumen and competence in contending with than it did in dealing with the two-state menace.

If not two-states, what?

With the growing prospect of the two-state option being abandoned, the question of what alternative paradigm Israel should adopt is becoming a question of increasing relevance.

It is also one which the Israeli “Right” has been appallingly remiss in addressing.

Indeed, for the better part of two decades, the “Right” limited itself to underscoring the myriad defects and dangers entailed in the two-state proposal, but largely refrained from articulating and advancing some cogent and comprehensive alternative prescription for its preferred vision of a permanent-status arrangement with the Palestinian-Arabs.

As a result, the “Right” found itself unable to respond effectively to the pointed and very pertinent question from adversarial two-state adherents: “So what’s your alternative?”

Failure to provide an adequate response to this question, eventually led to a drastic erosion of the Likud-led opposition to the two-state formula until its acceptance by Netanyahu in 2009.

But the recanting of support for the two-state formula by the GOP, and its waning attractiveness elsewhere,  will create a dramatically different and challenging reality for both the reluctant Likud-like two-staters on the one hand, and for still die-hard two-state opponents,  on the other.

For not only  will it be increasingly less plausible to invoke “irresistible international pressure” for reluctant acceptance, under duress, of a two-state compliant policy; but it will also no longer be possible to confine oneself to criticism and rejection of the two-state formula.

To the contrary, with the declining dominance of the two-state concept, its opponents will be obligated to proactively produce and present a plausible and practical Zionist-compliant alternative…or suffer the consequences of its generally accepted default option:  a multiethnic un-Jewish state-of-all-its-citizens.

As mentioned earlier, until lately, two-state opponents long eschewed presenting some persuasive, sustainable long-term blueprint for the outcome of the conflict with the Palestinian-Arabs.

In recent years, however, a spate of such alternative proposals has emerged. Sadly, not everything that is not a two-state compliant proposal is preferable to the perilous two-state principle itself.

And indeed, nearly all the major alternatives being advanced today by prominent figures on the “Right” are – notwithstanding the sincere goodwill of their authors—no less inimical to the long-term survival of Israel as the nation state of the Jewish people.

Thus while I bear none of them any personal rancor, I am firmly convinced that if these “alternatives” are advanced as tangible policy options to replace the two-state  concept, the consequences for Israel and the Zionist ideal will be grave.

Indeed, in broad brush strokes, these proffered “alternatives” to setting up a Palestinian state can be divided into three major categories.

The first is that proposed by those who favor “managing—rather than resolving–the conflict”, which basically consists of “kicking the can down the road”. In effect, it calls for letting the problem fester, until some unspecified event(s) occur to—hopefully and inexplicably—facilitate resolution.

The other two—somewhat more proactive—suggestions can be divided into those that will, almost inevitably and demonstrably, lead to either:
(a) the Lebanonization (and later Islamization) of Israel by incorporating the Palestinian-Arab residents of the territories across the pre-1967 lines, into the permanent enfranchised population of Israel; or
(b) the Balkanization of Israel by trying to encapsulate the Palestinian-Arab population in disconnected autonomous enclaves in these areas.

None of these three categories can pave the way for Israel—as the nation-state of the Jews—to a sustainable long-term situation that is any less menacing than that entailed in the two-state scenario.

In a series of past articles, I have—with varying degrees of acerbity/exasperation—laid out in considerable detail, the manifest shortcomings of these alternative proposals, to which I urge readers to refer. See:

What’s Wrong With The Right — Part I: As demented and disastrous as the two state “solution” is, most alternatives proffered by the Right would be no less calamitous.

What’s Wrong With The Right – Part II:The Right must realize that between the river and the sea, either exclusive Jewish or exclusive Arab sovereignty will eventually prevail.

Brain Dead On The Right?: The only thing more dangerous, delusional and disastrous than the Left’s proposal for a two-state solution, is the proposal now bandied about by the Right – for a one-state solution

To My Colleague Caroline, A Caveat:I strongly concur with Caroline B. Glick’s diagnosis of the fatal failings of the two-state formula, and disagree just as strongly with the prescription she offers to remedy them.

Sovereignty? Yes, But Look Before You Leap: Extending Jewish sovereignty over Judea-Samaria is imperative, but some proposals for this imperil Israel no less than the two-state folly.

Islamizing Israel – When The Radical Left And Hard Right Concur:The almost unavoidable result of annexing the territories & enfranchising their Arab population would be to eventually create a Muslim-majority tyranny.

Annexing Area C: An Open Letter To Naftali Bennett:Between the Jordan River and Mediterranean Sea, there can — and eventually will — prevail either exclusively Jewish, or exclusively Arab, sovereignty.

Sovereignty? Yes, But Beware Of Annexing Area C: Partial annexation of Judea-Samaria will solve none of the problems Israel faces today, and exacerbate many

The most urgent & important issue today

In these articles I show why:

– “managing the conflict” is an exercise in futility—and self-delusion—that will only carry the country on a perilous downward spiral, with prevailing problems increasing in both scale and intensity;

– proposals that prescribe including the Palestinian Arabs in the permanent population of a post-two-state Israel would almost inevitably turn the country into a Muslim-majority tyranny within a few generations—even if the optimistic demographers are right and, initially, the Muslim population will comprise a 35-40% minority;

– proposals that advocate partial annexation and limited autonomy for the Palestinian Arabs, concentrated in disconnected mini-enclaves will result in wildly torturous and contorted borders, virtually impossible to demarcate  and secure, thus emptying  “sovereignty” in the annexed areas of any meaningful content.

None of these proposals offer a sustainable alternative paradigm to the two-state formula that can ensure Israel’s survival as a viable nation-state of the Jewish people.

The GOP’s new platform can indeed herald a great new opportunity for Israel, especially—but not necessarily, only—if it wins the November elections.

But to reap the potential benefits that this entails, Israel must prepare.  It must formulate a cogent, comprehensive paradigm to replace the two-state folly, which addresses both its geographic and demographic imperatives for survival—lest it promote a proposal that threatens to make it untenable geographically or demographically–or both.
It must be a proposal that ensures that Israel retains its vital geo-strategic assets in Judea-Samaria and drastically reduces the presence of the hostile Arab population resident there—preferably by non-coercive means such as economic inducements…which, by the way, is what brought the bulk of the Arab population here in the first place.

Initiating debate on this is a matter of paramount urgency and importance. I can only hope that this essay will help initiate it.