Pashtun is a Central Asian nation that lies between the rivers Oxus and Indus. Pashtun is also known as Afghan, Pakhtun and Pathan; the latter name, however, is construed as offensive by the Pashtun people because, it is said, that the name ‘Pathan’ was given to the Pashtun by the British during their rule in India. The land of Pashtun is called Loy Afghanistan, Pashtunistan and Pashtunkhwa. Since Pashtuns of Pashtunkhwa or Pakhtunkhwa were fighting for their freedom against the British Imperial might, they had a great contempt for the colonizers and everything about them. It is also said that the word ‘Pathan’ is actually derived from ‘Fatey-Heen’  meaning  ‘conquerors’, as the Afghans came to India as conquerors where the word ‘Fatey-Heen’ was mistakenly pronounced as ‘Pathan’ by the British.

The Pashtun social life has an unwritten code of ethics known as Pashtunwali. Every Pashtun is expected to abide by Pashtunwali, which is based upon centuries of collective wisdom of the Pashtun. Pashtunwali consists of important principles that guide social and individual life such as:

Melmastiya– which means an open-hearted hospitality; Pashtuns are famous for their hospitality.

Nang– means chivalry, a moral and social virtue or a noble deed. To stand up for the weak is the very essence of Nang.

Nanawatey– is derived from the verb meaning “to go in”. This is used for the protection given to a person, who requests it, against his/her enemies. The person is then protected at all costs. It can also be used when a vanquished party is prepared to go in to the house of the victors and ask their forgiveness. This is a peculiar form of “chivalrous” surrender, in which an enemy seeks “sanctuary” at his enemy’s house.

Badal– defines an obligation to seek revenge by retaliation although the performance of Nanawatey means one can obtain forgiveness in his enemy’s house. Through the tradition of Nanawatey, a typical Pashtun will always forgive the killer of his dear ones in the presence of a Jirga.

Jargah or Jirga– a council of Pashtun elders through which justice is sought. Settling disputes through negotiation is the basic objective of Jargah: in other words, Jargah is a form of direct democracy in Pashtun society, where every individual has the right to speak.

Namoos– the respect of women, country, and property.

Attan– is an Afghan national dance, performed before war and after the victory. It is also performed at various cultural celebrations in Pashtun society. Every Pashtun man and woman is trained to dance the Attan as well as being the best in playingRabaab and singing Tapa – a typical Pashto song.

Pashto or Pakhto is not only a language in Pashtun society, but is synonymous with the Pashtun code of life – Pashtunwali (the Pashtun values). Pashtuns love their mother tongue Pashto and claim that in paradise they will speak Pashto instead of Arabic; it is pointed out that according to the teachings of Islam, Arabic is the only language that will be

spoken in the world hereafter. However, a well-known Pashto poet, Hamza Khan Shinwari (Hamza Baba), in one of his poetic verses responding to the teachings of Islam and Mullahism, says:

“The rivals (Mullahs) name Pakhto as the tongue of hell,

But I (Hamza) will go to paradise with Pakhto.”

Ghani Khan, the great Pashto poet of 20th century, is of the view that “a typical Pashtun is kind and gentle but hates to show it. He loves fighting but hates to be a soldier. He loves his new
rifle and his old wife. He will

forgive you anything, if you do it bravely enough. In a historical perspective the Pashtun bears close resemblance to the people of great civilizations. His villages have Greek names. His tribes have Greek customs. Like the Greek he is a great poet and a great warrior and like the Greeks, almost all his wars are over women.”

Pashtuns are basically a proud people, as former British Prime Minister Sir Winston Churchill, in his book ‘The Malakand Field Force’, says, “Any poor Pathan (Pashtun) here is ready to look into the eyes of the Queen of England and say, I am no less than you”.

Pashtuns have a great love for Pashtunkhwa which is their historical land, but unfortunately, British-India occupied part of it and later, in 1893, divided it by drawing a line, called the Durand Line, through its centre, effectively cutting the Pashtun nation in half. With the withdrawal of the British from the subcontinent, the land came under the jurisdiction of Pakistan in 1947. To date, Pashtuns in Pashtunkhwa are occupied by Pakistan, but the spirit of freedom among the Pashtuns will never die. Yes, it can be weakened by fate and time, but stays always strong in will.

Expressing love for the land of Pashtunkhwa, Ahmad Shah Abdali, the founding father of the modern state of Afghanistan, spoke in his poetry in 1760, “I forget my Delhi throne when I recall the mountain peaks of my beautiful Pashtunkhwa. If I conquer the whole world, even then I can never forget thy beautiful gardens.”

Now the Pashtun land is divided into many parts and almost all occupied by their neighbors. The Durand Line is considered with hate, dividing the Pashtun as once the Berlin Wall divided Germany. Now, it will not be wrong to say that Pashtun cannot be called a nation, but rather groups that are divided and scattered and the uneducated Pashtuns, are unable to realize the dilemma of their disintegration. In Pakistan, Pashtuns are not taught their own history, but that of the Indo-Pak and Jihad in Islam. The Pashtuns are indoctrinated into the belief that they are born to fight against   infidels, for the sake of Allah and Islam. In Pakistan, the Pashtuns are appreciated for their fighting skills but not for their intellectual abilities. Their language Pashto has been replaced by Urdu and as a result the majority of the Pashtuns living under the jurisdiction of Pakistan, cannot read or write their own Pashto language and only a few are able to understand news bulletins in the original and pure Pashto. The Pashtuns are being pushed into darkness and ignorance by the Pakistani establishment. By doing so, Pakistan can easily use the Pashtun for their own purposes, especially for proxy wars in the name of Islam, proclaiming that Islam is in danger. As a result, Pashtun society is falling apart politically, socially and economically.

Historically speaking, the Pashtuns, as individuals or a people, are a great people having done great deeds, but Pashtun as a modern nation has failed and for centuries, they have done nothing to forward a collective national cause.

Pashtuns will always have a dynamic character with a great zeal for music and dance, poetry and art, but in contrast to his poetic nature, the Pashtun is a warrior too. The best example of this contradiction is the great Khushal Khan Khattak.

religious Mullahs have dominated all the powers in the name of Islam, and have declared love, art and music as taboos. But if one looks through the pages of Pashtun’s history, they will find a culture full of creativity and art of any kind was not considered a taboo. In Pashtun society there is an institution known as ‘Hujra’, the essential symbol of Pashtunwali. Hujra is the site of great learning, for the promotion of art, poetry, music and culture in the Pashtun society. It is a common sitting or sleeping place for men in the villages, as Pashtuns are basically people of villages rather than cities, and guests and unmarried young men (bachelors) would sleep there. The Rabab and Mangay are two old Pashtun musical instruments and the real ornaments of Hujra and it is a well-established custom among the Pashtun to welcome guests with music. Hujra is also the decision-making forum of the villagers and provides vivid picture of the real Pashtun society and traditions. Today, the Hujra tradition is on the verge of disappearing, constituting a great loss for the culture. Although one can still see Hujra in some parts of Pashtun society, it exists in a very wretched form. Due to the dominance of the Mullah, Hujra has lost its important significance and the decision making process now takes place in the mosque instead.  The mosque and the persons connected to the mosque are at full gallop to grab away the powers of Hujra.

The Rabab and Mangay in Hujra actualize the Pashtuns’ basic love of art, music and poetry that the

religious Mullah has declared taboo in the name of Islam. With the banning of love, art and music in Pashtun society, religious extremism has been increased and the society altogether looks orthodox. This is not only a threat to all liberal Pashtuns but also an attack on the cultures throughout the rest of the world as the religious extremism benefits Mullahs in the recruitment of Mujahideen (Jihadists). Yet there is a group of cultured and progressively-minded Pashtuns who prefer Pashtunwali – the Pashtun code of life, to religious law ‘Shari’a’ for the conduct of matters. Such liberal people strongly proclaim that first, they are Pashtuns and then, Muslims.

(This article originally appeared in The Pashtun Times) 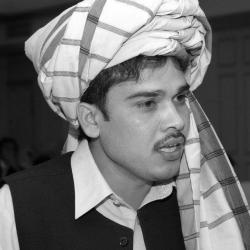