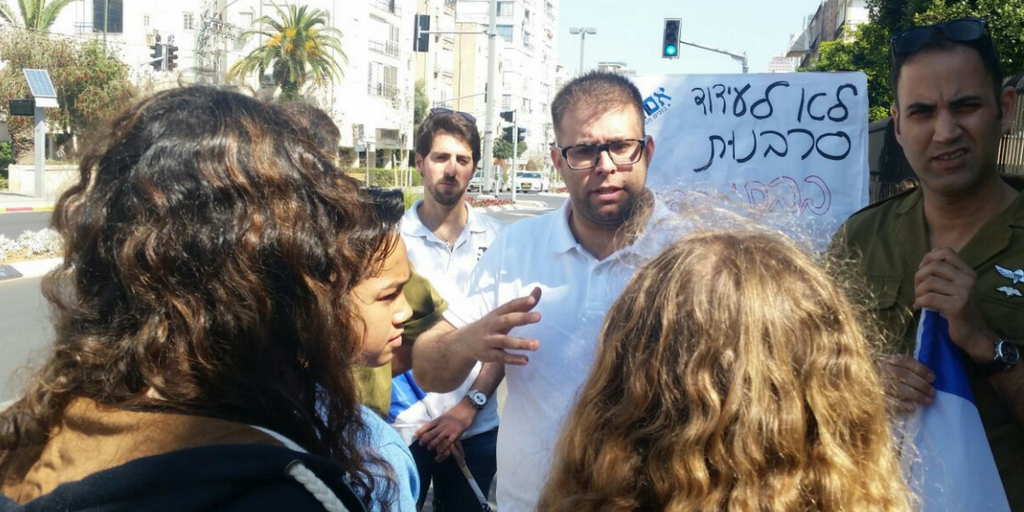 A classroom exercise at Tel-Aviv’s historic Herzliya Hebrew Gymnasium high school sparked controversy after it was reported last Thursday that students were forced to participate in a simulation of IDF activities at checkpoints in which “Palestinians” were abused by “IDF soldiers.”

According to the report published by the Israeli news outlet Walla!, students in the school’s 11th grade International Relations track were met at the entrance to their floor with two makeshift checkpoints manned by students simulating IDF soldiers. The students were forced to wait on long lines while “soldiers” proceeded to verbally abuse and refuse entry to some of the students.

The simulation drew sharp criticism from IDF reservists, wounded IDF veterans and pro-IDF activists who, by the initiative of the Zionist organization Im Tirtzu, organized a demonstration today (Sunday) outside the school.

The demonstrators were joined by MKs Oded Forer (Yisrael Beiteinu) and Oren Hazan (Likud) who voiced their opposition to the “anti-IDF” simulation.

“This simulation is outrageous,” said MK Forer. “It is time for Education Minister Bennett to end this situation in which some principals go about doing whatever they please. Red lines have been crossed a long time ago.”

Defense Minister Avigdor Lieberman also came out against the simulation during a live question and answer session on his Facebook page and said that such content is “fitting to be taught at a school named after [Hamas founder] Sheikh Ahmed Yassin and not in the Herzliya Gymnasium.”

Adva Zeltzer, head of the school’s International Relations track and activist in the far-Left Israeli NGO Zochrot that works to “promote acknowledgement and accountability for the ongoing injustices of the Nakba,” said that the simulation was voluntary and was initiated by the students.

However, students have come out and said that they were forced to participate in the simulation or risk receiving poor grades.

The school’s principal Dr. Zeev Degani backed the simulation and said that it was a “wonderful lesson that presented both sides. I am proud of my students.” Degani made headlines several years ago after forbidding students to wave the Israeli flag on school grounds and advocating to refuse IDF service.

Liran Baruch, a wounded IDF veteran who lost his eye during an operation in Kalandiya, was present at the demonstration and wore his uniform for the first time since his injury. Baruch said: “I was wounded because ‘human rights’ organizations instigated riots and violence in Kalandiya that resulted in me losing my eye. I didn’t shoot because I didn’t want to accidentally harm innocents.”

“It pains me to see the school’s administration blackening the name of IDF soldiers,” added Baruch.

Im Tirtzu’s National Branch Coordinator Tom Nisani took part in the demonstration and said: “We are here today protesting this disgraceful act of contempt towards IDF soldiers. We are calling on the Education Ministry to act immediately to end this political exploitation of students.”

“This is inappropriate and certainly not educational,” concluded Nisani.