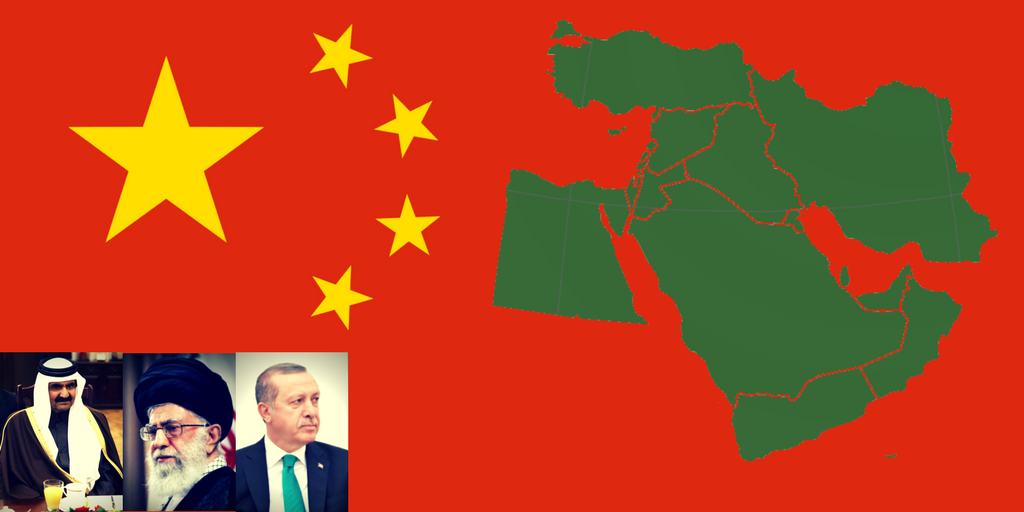 China’s goal is to become the leading economic superpower and to move the world away from the US dollar. They have been forming alliances with Middle Eastern countries including Iran, Qatar and Turkey. The petrodollar system is the primary reason the US dollar is still the world’s reserve currency as oil producing countries like Saudi Arabia do not sell their oil in currencies other than US dollars. Without this agreement, the US dollar would eventually lose its role as the global reserve currency. China has been working with countries in the Middle East to sell their oil in yuan and thereby weaken the US.

The Chinese strategy has been to internationalize their currency via a number of different projects (see list below). A Zerohedge report in April articulates how China and Russia are joining forces to bypass the US dollar in global trade. The Shanghai Cooperation Organization (SCO) described as a ‘Eurasian political, economic, and security organization’ is one of the means of executing that vision. Its members include China, Kazakhstan, Kyrgyzstan, Russia, Tajikistan, and Uzbekistan. Earlier this month, India and Pakistan were admitted as members. These countries are expected to further enhance their economic relations via trade. For China to successfully meet its goals, a larger base of countries must join this block.

According to this report, bilateral trade between China and Iran grew to $31.2 billion in 2016. Iran is currently listed as having ‘Observer status’ in SCO. As Russia has long wanted Iran to attain full membership status, China recently signaled its support. Incidentally, Iran announced earlier this year that it would stop using the US dollar in its official statements. Iran and China conducted a naval drill in the Gulf a few weeks back.

President Tayyip Erdogan implied last December that Turkey is taking steps to allow commerce with China, Russia and Iran to be conducted in local currencies. A Chinese report confirmed that to ‘increase the trade volume and foreign investments between Turkey and China, and decrease their dependency on the US dollar during financial transactions, China and Turkey have started direct trading with their local currencies’. Current trade volume of $28 billion is expected to increase.

Turkey even dropped hints at shuttering the Incirlik air base to US air operations. With the US support of the Kurds in their fight against ISIS, there may be a stronger motivation to act. In fact, Turkey refused German lawmakers access to the base leading Germany to announce plans to withdraw 280 troops, as well as surveillance planes and refueling jets, from the Incirlik air base. If you are interested in understanding the historical importance of thie Incirlik air base read this and this. Turkey is listed as a ‘Dialogue partner’ in SCO.

Over two years ago, Qatar launched the first Chinese yuan clearing hub in the Middle East. According to Qatar’s central bank governor, Sheikh Abdullah bin Saud al-Thani, it would create ‘the necessary platform to realize the full potential of Qatar and the region’s trade relationship with China’. Since it opened, Industrial and Commercial Bank of China has cleared more than 590 billion yuan ($86 billion) in transactions in Qatar. Zheng Chunyi, General Manager of ICBC Doha, confirmed that ‘Qatar, the United Arab Emirates and Kuwait are the most active Middle East countries using the RMB clearing center for direct payments with Chinese mainland and Hong Kong’.

The newly formed Iran-Turkey-Qatar axis (as evidenced by events such as this, this and this) is tied together by each countries’ burgeoning relationship with China. While Russia has a greater military presence in the Middle East (via Syria) and draws the most attention from Russia-phoebes in the US, China is the key financial player. Together, both Russia and China have emerged as a direct threat to US supremacy in the region. Although Iran has always had better relations with China, Turkey and Qatar have been solidly aligned with the West as each country still maintain US military personal at their bases.  Perhaps, both countries are hedging their bets based on a calculation that will see a rising China and declining US.

Since the inauguration, President Trump has not mentioned the 28 page document (known simply as ‘The 28 pages’ and discussed during the campaign) which implicated members of the Saudi Arabian government for their involvement in the 9/11 attacks on the World Trade Center. He in fact visited Saudi Arabia last month, participated in a sword dance and signed off on a $110 billion weapons deal. Why? The answer is the petrodollar. The key part of this agreement is that the US must defend Saudi Arabia as long as they sell their oil in US dollars.

It would appear that China is taking no chances and is working on pushing Saudi Arabia into its sphere of influence. Byron King from the Daily Reckoning speculates that China is looking to modify its terms of its oil trade with Saudi Arabia as follows:

‘China is currently modifying the terms of its oil trade with Saudi Arabia. Specifically, China is working on a deal to pay for Saudi oil using Chinese yuan. This effort poses a direct threat to the security of the dollar. If this China-Saudi deal happens — yuan for oil — it’s another step closer to the grave for the petrodollar, which has dominated global finance since 1974.’

Whether the speculation is true or not, the threat to the US dollar as the reserve currency is real. The petrodollar system is under an attack directed by China.

From a US perspective, options are limited and further actions like a US invasion of Syria could make the situation worse. Since the US military has decided to back the Kurds to fight ISIS, there is less of a chance to win back Turkey. In my opinion, the best option would be for the US to maintain the current petrodollar system as long as possible until a new one backed by cryptocurrencies is ready. I outlined this in my prior post titled Global Currency Reset Happening Now as Bitcoin Price Explodes. Unfortunately, the US Senate doesn’t have a clue.

Projects that will Further Internationalize the Chinese Yuan

This post originally appeared on News with Chai blog.