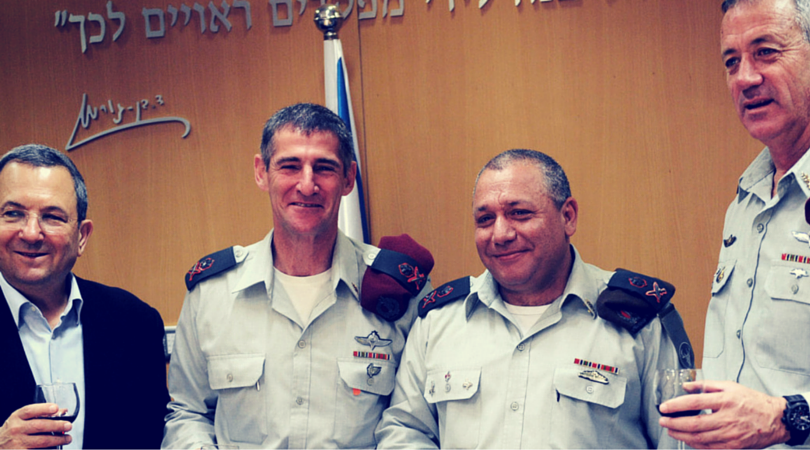 “Israel has been infected by the seeds of fascism …There are no serious leaders left in the world who believe the Israeli government.” – Former PM, Ehud Barak, Channel 10, May 20.

“Today we have a country afflicted with ultra-nationalistic extremism, infected with the seeds of fascism and chauvinism.” –Head of opposition, Isaac Herzog, Knesset, May 23.

“Israel has truly become today the last bastion of fascism, colonialism and racial discrimination in the world.” – Nabil al-Arabi Secretary-General of the Arab League, Cairo May 28.

“I fought with all my might against the phenomena of extremism, violence and racism in Israeli society that are threatening our national resilience and are seeping into the Israel Defense Forces; in fact already harming it… But to my great regret, extremist and dangerous forces have taken over Israel and the Likud party.” – Former defense minister Moshe “Bogie” Yaalon, Resignation speech, May 20.

“Today Israel is suffering a process of ongoing radicalization and increasing extremism, which has brought criticism from senior Israelis against their government. They all say that Israel behaves in a fascist and racist manner. They say so. Like the deputy chief of staff of the IDF said ‘Our behavior is reminiscent of the behavior of the Nazis prior to WW II.’”– Mahmoud Abbas, Head of the Palestinian Authority, Cairo, May 28.

May was a very good month for the myriad of eager Israel-bashers across the globe.

With no effort on their part, the recent rash of stupid, ill-considered — and gravely misleading — public proclamations provided them with more to bash Israel with than they could have wished in their wildest Judeophobic dreams.

What more could they have hoped for? Some of the most senior figures in the Israeli establishment have now publicly corroborated precisely what they have been trying to convey in their toxic tirades against the Jewish state for years. Now they have it on the best of authority — straight from the horse’s mouth, so to speak:
The Jewish state is a fascist, racist entity — indeed, one of an evil kind in today’s world.

Who could argue with them now? Israel is descending inexorably in to the lowest depth of human depravity comparable to the darkest times humanity has known in modern history.

Indeed, they need not even make these horrific accusations themselves — and expose themselves to charges of antisemitism. All they need do is quote the vitriolic condemnation of Israel by its own political and military leadership. And if they embellish or distort them slightly — who would notice, or even care enough to wrangle over details. After all, when the principle has been made so indelibly clear, who has time for splitting fascist hairs?

The point of departure for this deplorable and distortive portrayal of Israel can be traced to the abominable analogy made by the IDF’s deputy chief of staff,  Maj-Gen. Yair Golan at a Holocaust commemoration ceremony on May 4. Golan suggested — or, at least, could plausibly have been interpreted by Israel’s fiercest detractors as suggesting — that Israel is undergoing  a process reminiscent of those that heralded the advent of fascism and the rise of Nazism in Europe in the 1930s. He proclaimed:  “If there’s something that frightens me about Holocaust remembrance it’s the identification of the horrific processes that occurred in Europe in general, and particularly in Germany, back then…and detecting signs of them here among us today in 2016.”

It matters not whether that such a parallel was his intention or not.  Once the anti-Israel cohorts could spin it that way, it took on a life of its own.

This apparent rebuke raises two issues.  Firstly, if Golan chose to articulate it, he clearly must believe that the objectionable features he mentions, comprise a significant trend in Israeli society. Otherwise why bring it up — especially in a Holocaust commemoration speech? But if they are not, it is a rebuke that is totally irrelevant.

Secondly, if Golan feels that these features do represent significant propensities he is hopelessly out of touch with the dominant characteristics of Israeli society — and his implied rebuke is wildly unrepresentative.

Perhaps he missed the wide coverage of Israeli humanitarian missions to disaster areas such a Haiti and Nepal among a host of other afflicted countries to which Israel extends aid. Hardly indicative of “callous thick-skinned bestiality.”

Other things might have slipped his mind, like the extensive medical treatment provided to casualties of the gruesome civil war in Syria.  Or the hospital services given to the family members of Israel’s sworn enemy, Hamas — including those of its leader in Gaza, Ismail Haniyeh. Indeed, Haniyeh’s  own mother-in-law, grand-daughter and daughter were all admitted to Israeli medical facilities in 2013-14, the latter “just weeks after a 50-day war [Protective Edge] between Israel and the Palestinian Islamist movement” (The Telegraph, October 20, 2014). OMG – just how much “hate for the ‘other’” can a country harbor!

Perhaps one of the better gauges of  just how damaging Golan’s remarks — and those of others that followed them — were to Israel, is an interview with journalist, Ben-Dror Yemini, on Tel Aviv Radio (May 4). For the record, Yemini is a left-leaning publicist and self-confessed supporter of Herzog’s left of center Zionist Union in the last election.

At the outset of the interview, Yemini described Golan’s abhorrent allusion as an “appalling mistake” especially for anyone who has any idea of ongoing developments regarding Israel in the world.  He went on to remind listeners that Israel was fighting “on two fronts, and today the PR front is no less important than the military front”

He lamented: “To compare Israel to Nazi Germany reflects a kind of insanity that, regrettably, is beginning  to dominate us…If the deputy leader of the British Labor party…who we accuse of antisemiticsm …had have said that, he would have been thrown out of the party.”

With evident bitterness, Yemini claimed: We are providing weapons for the Hamas’s propaganda…I have been engaged in a world-wide effort to repudiate the false accusations against Israel, and suddenly someone like [Golan] comes along and ruins years of work.

Greatly agitated, Yemini continued: “Anyone who compares Israel to the Nazis is not someone who usually wants to criticize Israel. It is someone who does not want Israel at all!…Moreover it is all a lie! But when he [Golan] says it, it gives them a boost. The whole social network is abuzz. All the anti-Israel and antsemitic sites have made him a hero”.

“As damaging as a terror attack…”

With a touch of drama, Yemini informed the interviewer: “I was in Auschwitz, at a conference on the Nuremberg Trials, when I heard Golan’s remarks. I was there! Right there! I spoke with some of the participants, who were not right-wing people. The general perception was this [Golan’s speech] was equivalent to a terror attack. No less!…”

Still greatly troubled, Yemini penned an article five days later entitled “A PR terror attack” (Ynet, May 9). In it, he strongly refuted any slide toward large-scale fascism or racism in Israel, which despite the grave threats to its existence, still compares favorably, in terms of the liberalism and tolerance, to other European democracies. By way of comparison he cites Sweden, often a vehement critic of Israel, where “dozens of refugee centers were burnt” and “polls show up to 15% backing for a party representing neo-Nazi supporters.”

True, like any other society, Israel has its blemishes. There are instances of hooliganism, social intolerance and even ethnic bias.  But there are no politicized movements of any significance, and certainly none with any electoral prospects, that promote doctrines of racial superiority or promulgate the principles of fascism.

Accordingly to suggest that Israel is in anyway afflicted with the seeds of fascism is not criticism. It is indeed  as Yemini states, a blood libel.

Hollow ring to cries of dismay

Any allusion by any Israeli of prominence that any such phenomena exist, betrays not only a poor grasp of the socio-cultural realities in the country, but also raises grave questions as to his/her motivations and/or quality of judgement.

Of course the chorus for dismayed voices warning of the impending advent of fascism/racism/extremism was amplified in the wake of the Golan address by the replacement of Moshe Ya’alon as defense minister by Avigdor Lieberman.

Admittedly, I have serious reservations as to what to expect from Lieberman, and as to the rationale for appointing him to such a crucial post in the wake of what was a devastating electoral failure at the polls last year (with his faction diminished by over half and reduced even further by his most prominent MK — Orly Levy — quitting the party). However, that said, the distraught cries by many of his detractors as to the danger he poses to Israeli democracy, have a decidedly hollow ring to them.

Indeed, many of his current critics have, in fact,  served with him in governments in the past, without expressing undue alarm as to the grave threat he posed to Israeli democracy — even when his electoral success was far greater. Indeed, Lieberman has served, including as deputy prime minister, in every government since 2001, when Arik Sharon wrested power from Ehud Barak.

It is thus difficult to avoid the impression that the current deluge of opprobrium for him is motivated more by political and personal chagrin than any real genuine concern for the future of democratic governance in Israel.

Take for example Ehud Barak, who served as deputy prime minister together with Lieberman both in Ehud Olmert’s government (2006-9) and in Netanyahu’s (2009-13), with nary a concern expressed for Israeli democracy.

In his Channel 10 diatribe (see opening except), Barak sought to illustrate his point  regarding the “seeds of fascism” taking hold in Israeli society by referring to legislation promoted by members of the current coalition. Among these allegedly “egregious” undemocratic initiatives was the law to lift the parliamentary immunity of Knesset members who support terrorism (Haaretz, May 20).

This of course leads one to wonder whether, according to Barak, the litmus test of democratic governance is giving elected legislators in the national parliament license to support terror organizations, dedicated to the destruction of the society that that parliament represents, secure in the knowledge that they will be  immune  from any punitive action.

Apparently in Barak’s eyes, for a country to avoid being afflicted by the “seeds of fascism”, it must give priority to the rights of legislators to support terror over the rights of intended victims of that terror to life.

This is, of course, an “interesting” perspective and one that might explain why in the past Barak proclaimed that, if he had been a Palestinian, he too would have engaged in terror.

The howls of dismay at the approaching demise of Israeli democracy are utterly unfounded and uncalled for.

When they come from highly-placed Israelis, who put short-term personal and political interest before the long term national one, they inflict incalculable, perhaps irrevocable harm on the country, inevitably compelling us to recall the words of Isaiah 49:17

“Thy destroyers and thy demolishers shall emerge from within thee. “

So it would seem.