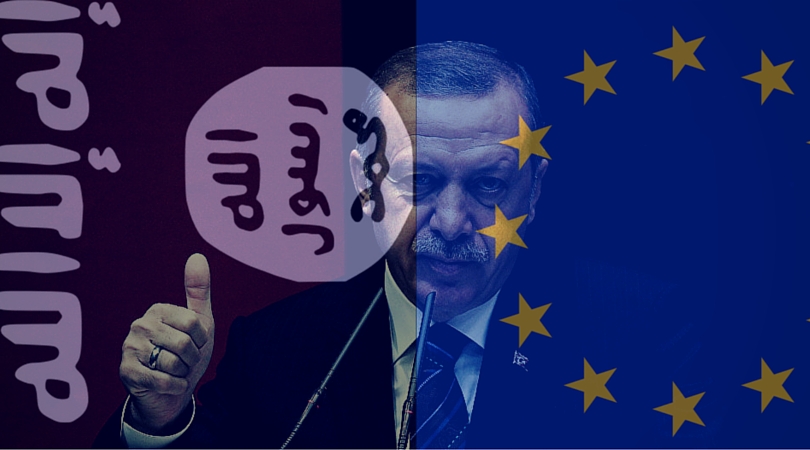 Germans came to a nasty realization that their liberal euphoria in being an open and tolerant society may have been at the very least a bit naive if not down right deadly. The Syrian refugee turned suicide bomber was no psychiatric case, but rather revealed to be an ISIS member after police discovered ISIS material on his phone.  ISIS wasted no time claiming the attack their own. Where there is one ISIS member there are countless others. The attack has left the region shocked.

The idea that Germany would soon be entering the same fate as France was not lost on the Bavarian region, which is now in a state of panic.  This realization is born in an understanding that something far more sinister is at foot in Europe.  As refugees have streamed from Syria into Europe, their transit takes them almost exclusively through Turkey.  The fact is most refugees could have been stopped at the Turkish Syria/Iraq border, but have not been. Actually the opposite has happened, they have been welcomed. Once there they find themselves pushed West into Europe itself.

More than this Turkey ferries and protects ISIS members as they help swell the ranks of fighters in Syria.  Granted the refugees deal has slowed this movement, but Erdogan and company has still allowed it on a slow flame.  The question Europeans need to ask is why is Turkey doing all of this.

The answer is simple: chaos equals conquest.  As an Islamist Erdogan believes it is his duty to reconquer areas taken from him by infidels as well as push Islam to new locations.  For Erdogan ISIS serves the first purpose by bringing chaos to Syria and the rest of the Mesopotamian region, an area Turkey used to control.  Refugees fulfills the second, which is a destabilization of Europe due to overwhelming numbers and increasing ISIS attacks.

Now that Turkey’s turn to autocracy is all but confirmed, the EU entry negotiations will become permanently stalled, paving the way for the nullification of the refugee relocation deal.  If Europeans thought their lives were bad now, in the coming months it will be a lot worse.