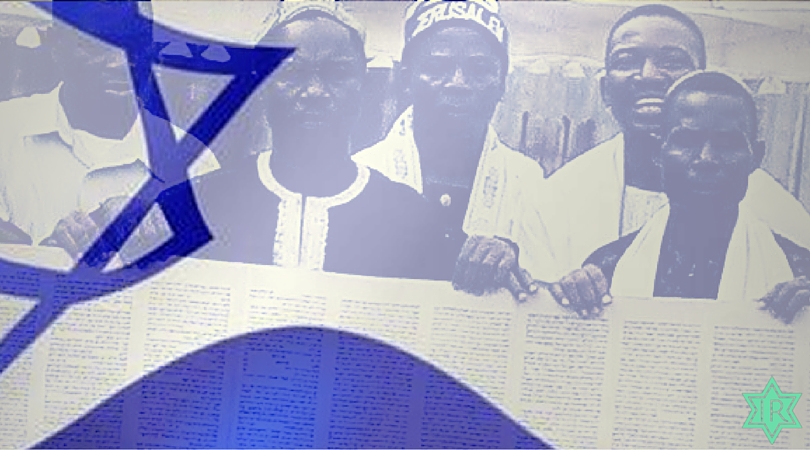 Many believe that much of my findings which I have documented in 6 books is helping to fill the void. I have been told many times that my presentations of Igbo culture illuminate the Tanakh, that they make clear many of what otherwise would seem of no consequence or importance. On the other hand, Jewish cultural studies have served as an Igbo Studies primer to me.  As could be seen Jewish Studies is providing us with help in understanding the history of some of the customs. As well as enabling us to fill gaps in our general history. So it’s a win-win situation for both the Igbos and the Jews.

The Igbo way of life is called Omenana, which if you translate to English you will get ‘things, laws, customs, traditions that you have to do or observe in or on the land’. This I believe will give you a clear message because the Torah of Israel which is the basic code of the culture of Israel contains essentially what/the laws, customs, etc, that the Israelites are to do/observe on the land..’

300 years or so ago, my family with Udoji my great grandfather, who was an obi, and an nze, at its head brought in, and accommodated Nri from Ohaeri, another Igbo clan, who from all indications; which include evidence that Igbo migrated from the ‘north’, are Levites, and if they are not, we would then be forced to consider the strange possibility that there were two Israelite entities that were not connected in any way in ancient times.

My father who was born in 1920 told me that the family of non Ozubulu ancestry that are our ‘brothers’, because they live on our land, attend family meetings with us, and are our kinsmen presently came the following way to join us: Udoji was sitting on the corridor of his obi one day, around 300 years ago, enjoying the cool breeze, when he espied a family walking towards him. Getting closer, they saluted him, and responding he asked who they were, and they responded that they were Umu Nri; that they were looking for a place to settle and live. Udoji invited them in, gave them hospitality, allocated land to them, and they settled and became members of his family. They still live with us today. The special occupation of this family gives us a hint of who they are. Among the Igbo, like among the Jews, a suicide was not given a regular burial. The Torah said that a hanged person is an abomination. Here the English language I think missed the point of the Torah. Torah must have meant a person that hanged himself. A suicide! Hanging was a very regular means of committing suicide in ancient times. The Igbo believe that one who committed suicide by hanging -committed abomination-soiled the land (society), offended G-d, and that purifications must be performed before his body could be cut down to be thrown away. And he or she must not be mourned. My studies of Jewish traditions show that no Jewish group accords the suicide a normal, and regular mourning and burial.

Back to our Levites. This family that Udoji accommodated came from one of the families/clans that had authority to perform the required purification (cleansing). They had right, and freedom to move around, and to be allocated land by their brother Igbos to settle and practice their profession, exactly as the Lord required the biblical Israelites to do in the case of the Levites, who were also to move around in Israel, practicing their craft. Among the Igbo, the major purifications and cleansings have to be done by the priests of Nri.

Here we have another clincher: the primary family/clan of the Nri; Agukwu, where I conducted much research, and met great Igbo sages has the nickname: ‘Nri enwela ani’: the meaning of this would shock you. It means that the Nri don’t have lands.

Jacob, the Hebrew Patriarch prophesied that Levi would have no land in Israel, but would be scattered in Israel. Moses, the Law-Giver, through whom G-d instructed Israel directly relayed what G-d said about the Levites: they were to be scattered in Israel, as the priests of the Israelites. The Nri are scattered among the Igbo, as the primary priests. Nri have had this nickname ‘Nri do not have lands’ since immemorial times, and most probably most Nri indigenes have forgotten why they acquired the nickname. Tellingly, the family of Nri that settled with the Ilona, named one of their sons Asomba, which means that they can settle anywhere among their brother Igbos.

The obi are the persons who traditionally serve as the political leaders of Igbo communities.  My family which I have introduced by narrating how it accommodated a family of Igbo Levites, has provided the obi for my community, the Egbema, Ozubulu sub-clan for centuries. The function of an obi includes provision of the meeting place for the community, and maintenance of same. In this structure which is called community obi, the community also gathers for formal religious activities like prayers, which the oldest male member of the community leads. The obi also serves as the ‘court-house’ of the community. Issues are settled inside it, and sittings are only taken to the ilo (stadium) if the proceedings would attract very many people, and its feared that the obi would not be able to accommodate those that would like to attend.

The obi would very likely be the person that would represent the community if there are risky and costly assignments that the community needs to execute. For example, if the community needed to fight a neighboring community, the obi would lead the community. Also the obi is expected to shoulder the responsibility of the community, like accommodating the ‘Levites’ as I have narrated. The obi reminds me of the Hebrew judges, and kings, who led the people from the front; were at the forefront of the fights, and not at the rear. Saul was there at the war front making the arrangements for tackling Goliath, even volunteering his armor for the boy-soldier David. Also the obi who is wrongly misrepresented as ‘king’ today, or traditional ruler, to use what is in the Nigerian lexicon, reminds an observer of the Israelite ‘king’ whom G-d instructed that he is to still remain more less an equal of his brethren. The Igbo obi, unlike the kings (traditional rulers) among the Yoruba, Benin, Hausa/Fulani, Europeans,etc did not receive any special treatment from the Igbo. Like King Ehav, who wanted to buy Naboth’s land, because unlike real kings, he hadn’t control of the land in Israel, the Igbo obi has only his own portion of the ancestral land, and if he needs more, he has to buy.

The obi is empowered so that he can be strong as he performs his functions. An ofo which will help him to live a clean life is given to him. The Igbo have a belief that living sinfully leads to death. To avoid this fate, the obi who as a prominent person could more easily stray, is given an ofo, which one is scared of sinning when one is in possession of it. If the obi is the oldest man from the oldest family in the community, things are very simple in regards to the ofo, because it is the oldest Igbo from the oldest family that possesses the ofo of a particular community, among the Igbo. But if he is not, an ofo which will be subordinate to the main one will be provided for him.

In the good old days every Igbo goes to be consecrated, to become an ‘nze’. An nze is distinguished by the following: he is very careful about what he eats, and extra careful about what he does, says and hears. Traditionally the Igbo keep kosher. Substantial evidence of this exists in the wise sayings, lore, music of the Igbo, and in the animals that the Igbo consider as suitable for sacrifice. The nze goes an extra mile in observing the laws of kashrut, and general kosher. He can only eat food prepared in his home, by his wife, and this depends on her state. So sometimes he prepares his food himself. He does not say sinful things. And he must not hear sinful things. In my clan the nze has a bell that tingles tied to his bag. The purpose of the bell is to give sufficient warning that a holy man is passing, whenever he is abroad, so that people will be careful, because if someone says an unholy thing to his hearing, he has right to levy a fine, which must be paid without delay. The nze is distinguished by this red fez which must always be on his head.

The nze is the Igbo nazarite. Samson was a biblical model of the nazarite. How many letters are shared by nze and nazarite?

The osu, in some sections of Igboland and oru-ma in the Nsukka area of Igboland are auxiliary priests in the Igbo religion who lost status, and employment when the colonial authorities replaced Omenana with Christianity as the religion of the Igbos. Having being replaced, and their role and function forgotten and misunderstood, they presently suffer discrimination from other Igbos.

The osu have direct parallels in biblical Judaism. It is completely established and above ambiguity of any kind among the Igbo that the osu were people whose ancestors served in the sanctuaries that the Igbos set up in Igboland.

In ancient Israel, the Gibeonites were dedicated, to serve in the house of G-d, forever. Samuel was dedicated by his mother to serve in the house of the Lord forever.  We have seen two examples that paralleled the Igbo experience. Following is another one: The Gibeonites were not to be harmed. King Saul contravened the solemn vow of Joshua, and killed some of them. Under King David they had their pound of flesh back. Among the Igbo, one must never hurt an osu physically. General Joab who sought to avail himself of this protection and immunity when King Solomon pursued him, went into the House of G-d, caught hold of the horns of the Temple, because ancient Israelite law gave immunity to an Israelite that sought protection from pursuers by taking refuge with G-d Remember, some Igbo became servants/auxiliary priests by running into the sanctuaries for protection.

These people are in trouble presently. They have been replaced by Christian priests, their functions forgotten, misunderstood, scorned as pagan service. Accordingly they are as I said earlier, discriminated against.  This has taken its toll on the truth that rests behind the Igbo people’s connection to ancient Israel and the Jewish people. However, it is not over yet. The Igbo are realizing that they are not truly like the rest of the tribes and people that surround them.  We are at our core, a mixture of the lost tribes and those Judeans that were exiled at the time of the Roman conquest of the Land of Israel.  Josephus recorded that millions of Judeans were in fact sold into slavery to Africa. Thank G-d we are returning.