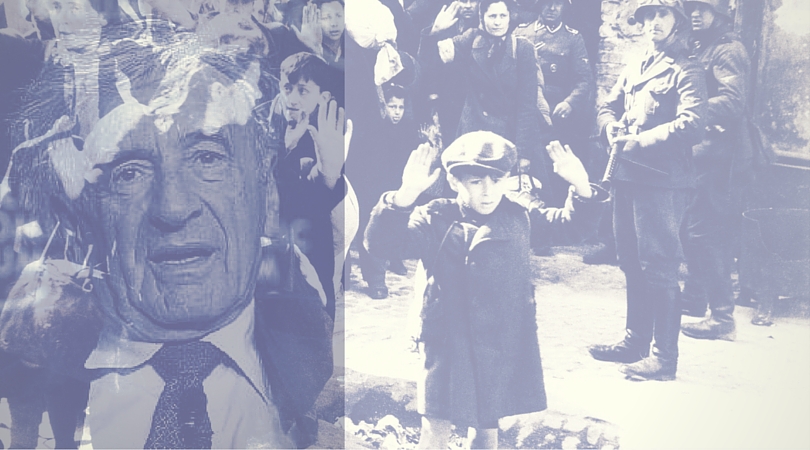 Freud observed that to mourn and to move on you have to know what you have lost or mourning can turn into a permanent melancholy.

I have never seen any photographs that connected my mother to the extended family she so often talked about. I was frightened, confused, and also ashamed that I did not believe her. In order for my child’s mind to reconcile something I could not comprehend, I had decided that my mother had made this family up, that those people never existed.

As a child I remember my mother, mourning her five nieces and nephews. “So young and innocent, they should be among the living,” is what she repeated, often. Growing up with this made me a witness to what had happened. For my first twenty years, I went from feeling sympathetic to feeling nothing but contempt. I was angry and also overwhelmed for being connected to my mother’s ongoing grief.

We were living with the ghosts of my mother’s vanished family. Her decision to run away from Warsaw after the German invasion haunted her all her life. A young woman of twenty-two, she said good-bye to her entire family, thinking she would be back in a few weeks. To stay alive, she had to keep going east into the unknown on trains crammed with other refugees. She found herself deep in Stalinist Russia, far from home and family, full of remorse and regret. But this decision saved her life.

Throughout my childhood I saw never any evidence that my mother’s family actually existed. I tried to understand how they could have vanished, Adek, Sala, and Anja, their 5 children. I grieved with my mother, although in truth, I could not comprehend how her family could have just disappeared. I had never seen any photographs to prove they had existed. I was ashamed that I did not believe her. I decided that my mother had made those people up.

I was frightened by my mother’s stories about surviving the bombing of Warsaw and the six years of war. Overwhelmed, I looked for ways to feel safe. I focused my attention on what I perceived to be my mother’s incredible adventure in Russia. I tried to picture her living in exotic, interesting places: the beautiful cities of Saratov and Moscow where she even experienced romance and love. She lived in Uzbekistan, in the desert, under a hot sun, and ate exotic food. I never allowed myself to see her hungry or sick. My mother was heroic and strong, splendid and beautiful in her tailored black coat. From those early childhood stories, I decided I wanted to be like her, to travel, to go to unusual and faraway places. I remembered that when I was still a child all I ever wanted was to follow in my mother’s footsteps. After all I was my mother’s daughter. I inherited her spirit. We saw the world through the same set of eyes. When I traveled to Israel, to study ancient and present cultures, it was like revisiting the landscape of my childhood. I got to work under the hot sun, live in a tent, ride a camel and like my mother did in Uzbekistan eat exotic food. I excavated in the desert at Tel Beer-Sheva. I observed the lives of Arab men and women, evoking my mother’s stories of strange lands.

Professor Elie Wiesel was instrumental in my translating, researching and eventually publishing my book, based on my mother’s journals.

But my awakening to the dark period in the chapter of our Jewish Polish history happened earlier, in 1971-1974, at City College of NY when our paths crossed while I was taking his classes at the department of Jewish studies. Here the things that bewildered me as a child growing up in communist Poland in the shadows of the Holocaust aftermath started to make sense. When Prof. Wiesel introduced us to his experiences in Auschwitz-Birkenau and Buchenwald concentration camps, I started to understand my parents. Reading his books made me realize that although my parents were survivors, that in losing their entire families, they could not escape their past. I was already in my late twenties when I first understood the importance of the stories my mother passed on to me throughout my childhood. When I told Wiesel about my mother he said, “Your mother must write her story. Future generations must know. You must help her to do it.

In the words of Elie Wiesel “silence is never an option.” So at great risk to her sanity and her health my mother agreed to commit her memories to paper and I was left with a greater understanding which in turn allowed me to confront the ghosts of my childhood.

Throughout my life I was torn between letting go and staying connected to my complicated history, somehow I continually found myself being pulled back into my mother’s world despite myself. My conscience would not allow anything else. And with my mother’s death, memories became sacred. On the day my mother died and for the next six years I entered my mother’s world and confronted my childhood in Poland. And Wiesel’s words would never leave my consciousness. “Not to be afraid of the journey ahead.”

I was born in communist Poland after the war, where I lived with my family until the late 1960s. Before leaving for America, I attended High School, Szalom Alejchem in Wroclaw. I graduated from CCNY with a BA in Anthropology. I received my MA in Archaeology from UCLA, and was awarded a grant, allowing me to conduct research and travel to Poland and Israel. Meeting professor and writer, Elie Wiesel, through the Department of Jewish Studies at CCNY, I realized the importance of Holocaust survivors’ stories. I insisted my mother write down her incredible accounts she shared with me throughout my life. Ultimately, I addressed the trauma of growing up in the shadows of Holocaust aftermath and how this trauma is transferred between generations. For me, the 2G, I had no way of knowing, but the seed for writing “Memory is Our Home” was planted in my childhood. Looking back in time, I know now that my entire life was a preparation, to be “a memorial candle”. I assumed the burden of my parents’ emotional world and I became the link between the past and the future. This history is embedded deep in my memory, my soul, it is part of my DNA.

My book, Memory is Our Home was published April 2015: http://www.memoryisourhome.com/