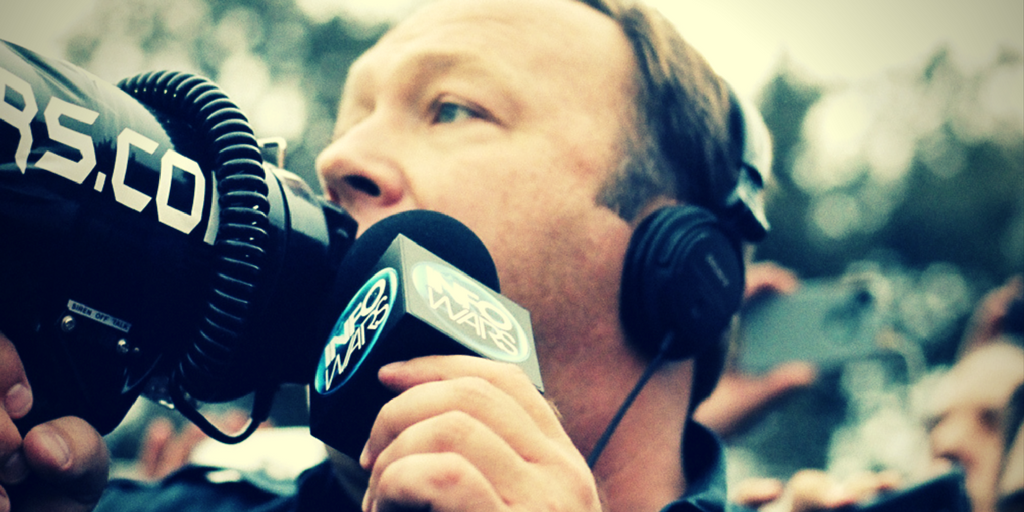 Currently under fire for her controversial interview with Alex Jones, Megyn Kelly tweeted the following a few days back:
“…How does Jones, who traffics in these outrageous conspiracy theories, have the respect of the president of the United States and a growing audience of millions? President Trump, by praising him, appearing on his show, and giving him White House press credentials, has helped elevate Jones, to the alarm of many. Our goal in sitting down with him was to shine a light – as journalists are supposed to do – on this influential figure, and yes – to discuss the considerable falsehoods he has promoted with near impunity.”

Legitimate question – why does Alex Jones have the respect of President Trump? As a presidential candidate, President Trump in fact said that Alex Jones has an ‘amazing reputation’. To date, he has not revoked his statement about Mr. Jones thereby making him conspirator-in-chief. So, in light of this, how can anyone take President Trump seriously? But curiously, as the NY Times states, many conservatives have never publicly denounced Alex Jones.

I have constructed a hypothetical conversation between Rush Limbaugh and President Trump which will provide the answer to why conservatives won’t denounce Alex Jones:

PT: Rush, great to see you.

RL: Mr. President, great to see you. You know, I’ve been meaning to ask you, and I say this with all due respect, but why are you so fond of this Alex Jones guy? I remember calling him a Democrat kook years ago. He is just nuts.

RL: No really, Mr. President. I don’t think you are helping yourself by associating with him.

PT: Rush, you and I know all about fake news.

PT: Let’s start with the Kennedy assassination, you don’t actually believe the official Warren Commission report, do you?

RL: No, of course not. Wait, you’re not going go all National Enquirer and implicate Ted Cruz’s dad for this?

RL: Sir, this is crazy. My theory is it had to be the mob or Castro but..

PT: Rush, you know the CIA admitted that it covered up the assassination and there are still missing documents.

RL: Ok, fine, but that was over 50 years ago and we all know about that.

PT: Well, you know what my buddy, Bruce Willis, said to Vanity Fair in 2007 – he was afraid of getting killed:

“They still haven’t caught the guy that killed Kennedy. I’ll get killed for saying this, but I’m pretty sure those guys are still in power, in some form. The entire government of the United States was co-opted. One guy did it? I don’t think so.”

RL: Ok, what does this have to do with anything? Look – I get all the Clinton conspiracies. We all know about the Clinton body count. I covered the Seth Rich murder conspiracy on my show. Sean [Hannity] laid out how he felt last October. You brought up Vince Foster during the campaign. But 9/11 being an inside job? Do you know how crazy that is?

PT: You know about the $2.3 trillion missing from the Pentagon.

RL: Yeah, whatever, that kind of stuff happens.

PT: Rush, you know there was no way those buildings were brought down by fire.

PT: Look, I am a builder and know everything there is to know about building structures. I even said so on 9/11 during an interview that there were bombs in those buildings.

RL: Yeah, basically faulted elements of the Saudi government. And, why are we still friends with the Saudis anyway?

PT: Don’t you find it curious how close the Bush family is to the Saudis?

RL: Yeah, but they didn’t have anything to do with it. Why, George W. Bush is a fine man. You are not going with this Bush did 9/11 theory are you?

PT: Let’s just say the Bushes are not so innocent in all this. Just view this.

RL: Is this stuff true?

PT: Of course, these are official government documents and there is lots of circumstantial evidence. Its also plain common sense.

RL: Yeah, I guess I finally understand why the Bushes and Clintons are such good friends. And all the new world order stuff..

RL: I also get why you were so tough on Jeb. Wait, so why are we fighting all these wars – Afghanistan, Iraq, Libya. For goodness sake, I was selling Club Gitmo t-shirts!!

PT: Rush, you’re not the only one. Talk to Congressman Walter Jones. He went from calling out France, you know, the whole freedom friesthing to deeply regretting his support for the Iraq war. He even said a few years back that Dick Cheney is probably going to hell.

RL: Wait, so Ron Paul has been right all along?

RL: So, Sandy Hook? Pizzagate? Are they all true?

PT: Look, not all conspiracies are true. There are some crazy ones going around. I even heard of one that Jared is a Mossad agent. All the truth will come out eventually.

PT: Well, don’t worry, there are plenty of us who know. Alex is one of the leaders. Until we reach a critical mass, we can’t go public yet. Information will come out in pieces. Look, we have gotten the concept of the deep state out there. Before my inauguration, barely anyone had even heard of it. So, we are making tremendous progress, tremendous. Still a lot of hate, a lot of division. We need to come together. In the future, expect more revelations. Like what my buddy Vladimir said. He just accused the CIA of planning the JFK assassination. And you remember how I hinted about not having any columns when I spoke to the CIA?

PT: Rush, the choice is yours, I understand the risks and won’t ask you to do anything you aren’t comfortable with doing. The truth will get out, regardless of what happens to me. It’s up to you to choose which side of history you want to be on.

Originally Published on News With Chai