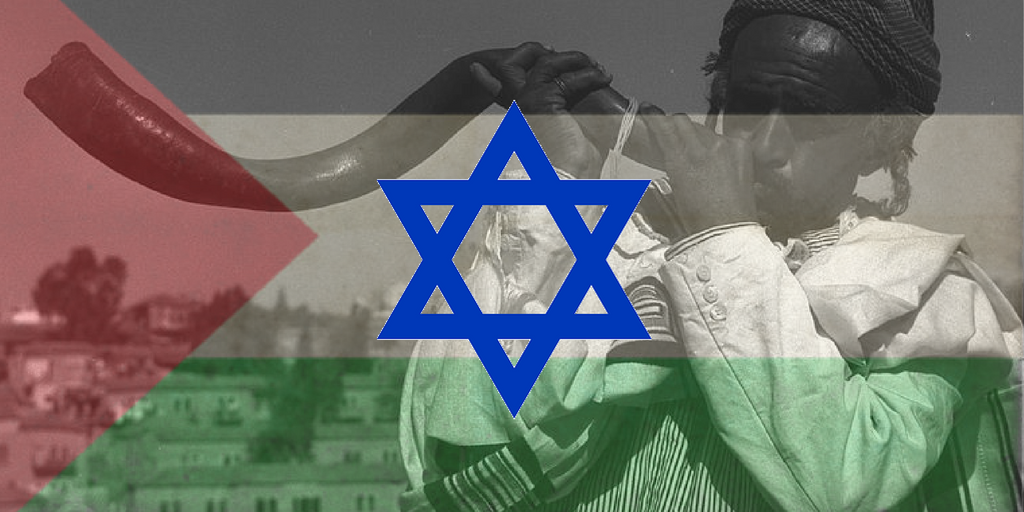 Until it is acknowledged by the UN and other bodies that the Jewish people and not the Arabs are the indigenous inhabitants of Eretz Israel, it is going to be difficult to break the impasse of anti-Jewish prejudice that is the real obstacle to peace.

In 1714, Hadriani Relandi, a mapmaker from Utrecht, published Palestina ex monumentis veteribus illustrata. The book was a record of Relandi’s trip to Eretz Israel in 1695-96. On his travels he surveyed around 2,500 places that were mentioned in the Tanakh and Mishnah, and he carried out a census of the people who resided in such places. He made some very interesting discoveries. For a start, he discovered that not a single settlement in Eretz Israel had a name that was of Arabic origin. Instead the names derived from Hebrew, Roman and Greek languages.

Another interesting discovery was the conspicuous absence of a sizeable Muslim population. Instead, he found that most of the inhabitants were Jews, along with some Christians and a few Bedouins. Nazareth was home to less than a thousand Christians, while Jerusalem held 5,000 people, mostly Jews. Gaza was home to around 250 Jews and about the same number of Christians.  The only exception was Nablus where around 120 Muslims lived, along with a handful of Samaritans, whose ancestors belonged to the northern tribes of Israel.

Relandi was not alone in discovering the lack of Muslims in the Land of Israel. Drawing on work by statistician and demographer Roberto Bachi, it is estimated that there were only 151,000 non-Jewish inhabitants of Palestine in 1540. (Some sources indicate that many of these were descendants of Jews who had remained in Palestine following the failed Bar Kokhba revolt in 136 CE but had been forced to convert to Islam). By 1800, the non-Jewish population had grown to around 268,000, rising to 489,000 by 1890, 589,000 in 1922 and just over 1.3 million in 1948. The vast majority of these non-Jewish migrants were Muslims. All of which suggests that most of the Muslim (and Christian) inhabitants of Palestine were recent immigrants and had not been living there for generations as is sometimes suggested. Moreover, the figures show that Arab immigration was a fast-growing trend, propelled by external circumstances. But what?

Firstly, several thousand peasant farmers had come to Palestine in the first half of the 19th century to escape Egypt’s military draft, forced labor and taxes. Secondly, the Ottoman authorities transferred a great many people from Morocco, Algeria and Egypt to Palestine in the early part of the 20th century, partly in an effort to outflank Jewish immigration. Thirdly, the Zionist project was very attractive to Arabs who were drawn to Palestine by the good wages, healthcare and sanitation offered by the Jews.  Indeed, the Muslim infant mortality rate in Palestine fell from 201 per 1,000 in 1925 to 94 per 1,000 in 1945. Meanwhile, life expectancy rose from 37 to 49 years.

During the British civil administration in Palestine (1920 to 1948), restrictions were placed on Jewish immigration in order to appease Arab troublemakers. However, the situation regarding Arab settlement was much more lax. Historian and author Freddy Liebreich claims there was significant Arab immigration from the Hauran region of Syria during the Mandate era – and that the British authorities turned a blind eye.

However, some people were taking notice. The Hope Simpson Enquiry (1930) observed  there was significant illegal Arab immigration from Egypt, Transjordan and Syria, which was negatively affecting prospective Jewish immigrants and contributing to Arab violence against Jews. The British Governor of the Sinai between 1922 and 1936 substantiated the view that unchecked Arab immigration was taking place, with most of the immigrants coming from the Sinai, Transjordan and Syria. And the Peel Commission reported in 1937 that a “shortfall of land” was “due less to the amount of land acquired by Jews than to the increase in the Arab population.”

Immigration continued at a pace until the Jews declared independence in 1948. The fact that Arab (largely Muslim) immigration continued right up until Israeli independence is borne out by the United Nations stipulation that any Arab refugee who had lived in Palestine for a mere two years prior to Jewish independence was entitled to refugee status. According to the UN Relief and Works Agency, Palestine refugees are defined as “persons whose normal place of residence was Palestine during the period 1 June 1946 to 15 May 1948, and who lost both home and means of livelihood as a result of the 1948 conflict.”

What happened to the Arab invaders of 629 CE?

If there were very few non-Jewish inhabitants in Palestine in the 16th and 17th centuries, what happened to the Arab invaders who arrived in 629 CE? Well, for a start, very few of the invaders actually stayed in Palestine. Many became absentee landlords who used native tenants to cultivate their estates and to pay the dhimmi tax. This is why Palestine, along with Egypt and Syria, remained overwhelmingly Christian for several more centuries. It is possible, however, that following the Muslim reconquest in 1187, many Jewish and Christian inhabitants of Palestine were forced to convert to Islam, thereby pushing up the number of Muslim inhabitants. However, Palestine’s population went into decline from the mid-14th century – in large part due to the Black Death, which swept in from eastern Europe and north Africa, travelling to Gaza, and making its way to Palestine, Lebanon and Syria. With no one to care for the land, many areas became malarial, especially in northern Palestine, which became largely uninhabitable. Depopulation continued as a consequence of the invasion of Palestine in 1831 by Muhammad Ali of Egypt and the ensuing Peasants’ Revolt of 1834, which reduced the male population of Palestine by about twenty per cent, with large numbers of peasants either deported to Egypt or drafted into Egypt’s military. Many others abandoned their farms and villages to join the Bedouin.

Clearly it would be futile to argue that there were no Arabs living in Eretz Israel in the late 19th and the early 20th centuries, but the figures do show that the Arab population had been in state of flux for centuries and that the overwhelming majority were migrants from the rest of the Arab world and/or the Ottoman empire. This is important because it tells us that the popular notion of a deep-rooted Palestinian Arab history/culture is bogus. All the evidence points to the conspicuous absence of Arab culture in late 17th century Palestine; and even in the 18th and 19th centuries the Arab inhabitants were not indigenous but were latecomers. This explains why, historically, Arabs never talked about Palestinian identity – because there wasn’t one. They were Egyptian, Syrian, Moroccan, Iraqi and Ottoman Arabs, and many of them expressed allegiance to the concept of a Greater Syria.

It wasn’t until the mid-1960s – nearly two decades after Israel declared independence – that a semi-coherent (and terroristic) Palestinian Arab identity came into being. Until then, the Arabs had refused to call themselves Palestinians because it was a name reserved for the Jews. When people today talk of a Arabic Palestinian culture or history, they are being disingenuous: the only Palestinian culture or history of any note is Jewish. Arabic-speaking Palestinianism started as late as the 1960s and was couched in fervently anti-Zionist and Judeophobic terms. Despite their successful efforts in deceiving the world, many Arab Palestinian leaders know the truth about the origins of their people. Egyptian-born Yasser Arafat made this very clear when he said, “The Palestinian people have no national identity. I, Yasser Arafat, man of destiny, will give them that identity through conflict with Israel.”

Even as late as the 1970s, the notion of a Palestinian people was still nothing more than a terrorist construct designed to undermine Jewish claims to the land of Israel. In a conversation with Dutch newspaper Trouw in March 1977, the leader of the pro-Syria as-Sa’iqa faction of the PLO, Zuheir Mohsen, remarked: “It is only for political reasons that we carefully underline our Palestinian identity […] yes, the existence of a separate Palestinian identity serves only tactical purposes. The founding of a Palestinian state is a new tool in the continuing battle against Israel.”

Why else do the people who claim to be Palestinians regularly turn down the possibility of an independent state alongside Israel? It is because the Arabs themselves don’t really believe in a State of Palestine. Their only interest is abolishing the Jewish presence between the Mediterranean Sea and the Jordan River. Jewish self-determination is anathema to many Muslims who, since the time of Muhammed, have tried to keep the Jews in a state of subjugation and dhimmitude. When Arab and/or BDS protestors call for Palestine to be free “from the river to the sea,” what they are really calling for is the genocide of the Jews.

Many of the problems experienced by the State of Israel stem from something very simple but profound –  the change of name. While it is totally understandable that the leaders of the Yishuv chose the name Israel for their state (New Judea was another option), it has had unfortunate consequences. By rejecting the labels Palestine and Palestinian, the Jews circumvented their own local history and identity, and bequeathed both the name and heritage of Palestine to the Arabs. What’s worse is the fact that the latter now claim to have been the indigenous people of Palestine all along – and the world (which has always been a sucker for anti-Jewish conspiracy theories) believes it.

It is surely time to remind the Arabs and the international community that Jews are the true Palestinians. Why else would there be a Palestinian Talmud or a Jewish newspaper called The Palestine Post. Why, until the creation of Israel, were the Jews known as Palestinians? Why did philosopher Immanuel Kant refer to Jews in Europe as “the Palestinians among us”? Why did Jewish campaigners in the early 20th century produce posters calling for Jews of America to register as members of the Zionist Organisation of America “for the freedom of Palestine”? Why does the 1939 flag of Palestine have a Star of David on it?

Now some critics might say, “Well, all this may be true, but the people who claim to be Palestinians are indeed Palestinians because they say  they are and they deserve our sympathy.” The trouble is, the so-called Palestinians make no attempt to explain who they really are but continue to perpetuate the antisemitic conspiracy theory that they are the primitive and indigenous people of Palestine who were/are cruelly oppressed by the wicked Zionists. The world believes this because they are told the lie often enough and because the Israeli state has done a poor job of communicating the truth.

And because of the big Palestinian lie, Jew-hatred is now at its highest level since the end of the Second World War and the United Nations has just passed Resolution 2334, one of the most antisemitic rulings in recent years. Until it is acknowledged by the UN and other major organizations that the Jewish people are the indigenous inhabitants of Eretz Israel – from the Jordan River to the Mediterranean Sea – it is going to be difficult to break the impasse of stubborn anti-Jewish prejudice that is the real obstacle to peace.