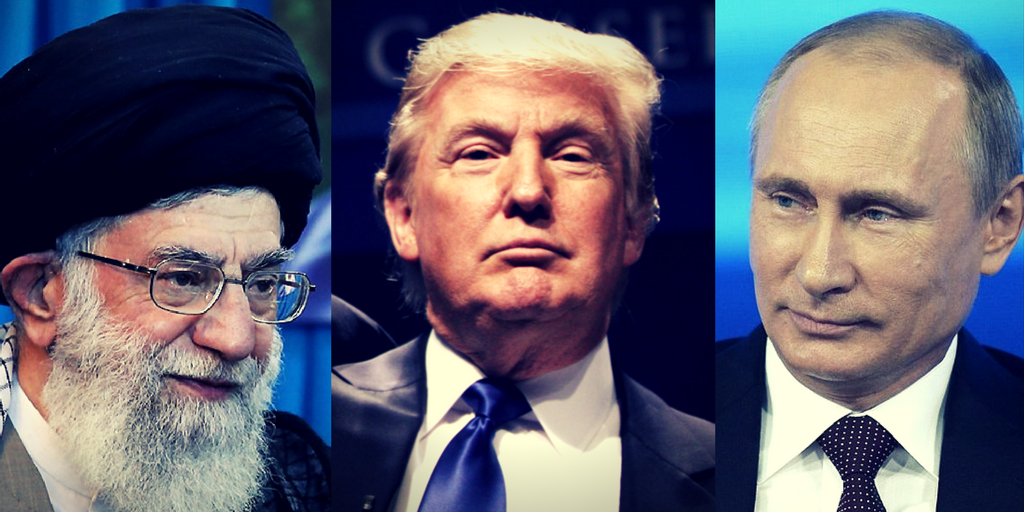 The Iran deal Trump needs to make with the Russians is clear.

While the media highlight the two men’s disagreement, the underlying truth about their concerns has been ignored.

Hezbollah and Iran’s nuclear program are two aspects of the same threat: the regime in Tehran.

Hezbollah is a wholly owned subsidiary of the regime. If the regime disappeared, Hezbollah would fall apart. As for the nuclear installations, in the hands of less fanatical leaders, they would represent a far less acute danger to global security.

So if you undermine the Iranian regime, you defeat Hezbollah and defuse the nuclear threat.

If you fail to deal with the regime in Tehran, both threats will continue to grow no matter what you do, until they become all but insurmountable.

So what can be done about Tehran? With each passing day we discover new ways Iran endangers Israel and the rest of the region.

This week we learned Iran has built underground weapons factories in Lebanon. The facilities are reportedly capable of building missiles, drones, small arms and ammunition. Their underground location protects them from aerial bombardment.

Then there is Hezbollah’s relationship to the Lebanese Armed Forces (LAF).

For more than a decade, the Americans have been selling themselves the implausible claim that the LAF is a responsible fighting force capable and willing to rein in Hezbollah. Never an easy claim – the LAF provided targeting information to Hezbollah missile crews attacking Israel in 2006 – after Hezbollah domesticated the Lebanese government in 2008, the claim became downright silly. And yet, over the past decade, the US has provided the LAF with weapons worth in excess of $1 billion. In 2016 alone the US gave the LAF jets, helicopters, armored personnel carriers and missiles worth more than $220 million.

In recent months, showing that Iran no longer feels the need to hide its control over Lebanon, the LAF has openly stated that it is working hand in glove with Hezbollah.

Last November, Hezbollah showcased US M113 armored personnel carriers with roof-mounted Russian anti-aircraft guns, at a military parade in Syria. The next month the Americans gave the LAF a Hellfire missile-equipped Cessna aircraft with day and night targeting systems.

And yet the Americans insist that it continues to make sense – and to be lawful – to arm the LAF.

You can hardly blame them. Denial is an attractive option, given the alternatives.

For the past eight years, the Obama administration did everything in its power to empower Iran. To make Iran happy, Obama did nothing as hundreds of thousands of Syrians were killed and millions more were forced to flee their homes by Iran and its puppet Bashar Assad.

Obama allowed Iran to take over the Iraqi government and the Iraqi military. He sat back as Iran’s Houthi proxy overthrew the pro-US regime in Yemen.

And of course, the crowning achievement of Obama’s foreign policy was his nuclear deal with the mullahs. Obama’s deal gives Iran an open path to a nuclear arsenal in a bit more than a decade and enriches the regime beyond Ayatollah Khamenei’s wildest dreams.

Power of course, doesn’t suffer a vacuum, and the one that Obama created was quickly filled.

For decades, Russia has been Iran’s major arms supplier. It has assisted Iran with its nuclear program and with its ballistic missile program. Russia serves as Iran’s loyal protector at the UN Security Council.

But for all the help it provided Tehran through the years, Moscow never presented itself as Iran’s military defender.

That all changed in September 2015. Two months after Obama cut his nuclear deal with the ayatollahs, Russia deployed its forces to Syria on behalf of Iran and its Syrian and Lebanese proxies.

In so doing, Russia became the leading member and the protector of the Iranian axis.

Russia’s deployment of forces had an immediate impact not only on the war in Syria, but on the regional power balance as a whole. With Russia serving as the air force for Iran and its Syrian and Hezbollah proxies, the Assad regime’s chances of survival increased dramatically. So did Iran’s prospects for regional hegemony.

For Obama, this situation was not without its advantages.

In his final year in office, Obama’s greatest concern was ensuring that his nuclear deal with Iran would outlive his presidency. Russia’s deployment in Syria as the protector of Iran and its proxies was a means of achieving this end.

Russia’s alliance with Iran made attacking Iran’s nuclear program or its Hezbollah proxy a much more dangerous prospect than it had been before.

After all, in 2006, Russia supported Iran and Hezbollah in their war against Israel. But Russia’s support for Iran and its Lebanese legion didn’t diminish Israel’s operational freedom. Israel was able to wage war without any fear that its operations would place it in a direct confrontation with the Russian military.

This changed in September 2015.

The first person to grasp the strategic implications of the Russian move was Prime Minister Benjamin Netanyahu. Netanyahu recognized that with Russian forces on the ground in Syria, the only way for Israel to take even remedial measures to protect itself from Iran and its proxies was to drive a wedge between President Vladimir Putin and the ayatollahs wide enough to enable Israel to continue its raids against weapons convoys to Hezbollah and other targets without risking a confrontation with Russia. This is the reason that Netanyahu boarded a flight to Moscow to speak to Putin almost immediately after the Russian leader deployed his forces to Syria.

Israel’s ability to continue to strike targets in Syria, whether along the border on the Golan Heights or deep within Syrian territory, is a function of Netanyahu’s success in convincing Putin to limit his commitment to his Iranian allies.

Since President Donald Trump entered the White House, Iran has been his most urgent foreign policy challenge. Unlike Obama, Trump recognizes that Iran’s nuclear program and its threats to US economic and strategic interests in the Persian Gulf and the Levant cannot be wished away.

And so he has decided to deal with Iran.

The question is, what is he supposed to do? Trump has three basic options.

The first option has the greatest potential strategic payoff. If Trump can convince Russia to ditch Iran, then he has a chance of dismantling the regime in Tehran and so defusing the Iranian nuclear program and destroying Hezbollah without having to fight a major war.

The payoff to Russia for agreeing to such a deal would be significant. But if Trump were to adopt this policy, the US has a lot of bargaining chips that it can use to convince Putin to walk away from the ayatollahs long enough for the US to defuse the threat they pose to its interests.

The problem with the Russia strategy is that since Trump defeated Hillary Clinton in the presidential race, the Democrats, their allied media outlets and powerful forces in the US intelligence community have been beset by a Russia hysteria unseen since the Red scares in the 1920s and 1950s.

The fact that Obama bent over backward to cater to Putin’s interests for eight years has been pushed down the memory hole.

Also ignored is the fact that during her tenure as secretary of state, Clinton approved deals with the Russians that were arguably antithetical to US interests while the Clinton Foundation received millions of dollars in contributions from Russian businessmen and companies closely allied with Putin.

Since November 8, the Democrats and their clapping seals in the media and allies in the US intelligence community have banged the war drums against Russia, accusing Trump and his advisers of serving as Russian patsies at best, and Russian agents at worst.

In this climate, it would be politically costly for Trump to implement a Russian-based strategy for dismantling the Iranian threat.

This brings us to the second option, which is to confront Iran and Russia. Under this option, US action against Iran could easily cause hostilities to break out between the US and Russia. It goes without saying that the political fallout from making a deal with Russia would be nothing compared to the political consequences if Trump were to take the US down a path that led to war with Russia.

Obviously, the economic and human costs of such a confrontation would be prohibitive regardless of the political consequences.

This leaves us with the final option of doing nothing, or anemically continuing to implement Obama’s policies, as the Americans are doing today.

Although tempting, the hard truth is that this is the most dangerous policy of all.

You need only look to North Korea to understand why this is so.

Seemingly on a daily basis, Pyongyang threatens to nuke America. And the US has no good options for dealing with the threat.

As Secretary of State Rex Tillerson acknowledged during his recent trip to Asia, decades of US diplomacy regarding North Korea’s nuclear program did nothing to diminish or delay the threat.

North Korea has been able to develop nuclear weapons and intercontinental ballistic missiles while threatening the US with destruction because North Korea enjoys the protection of China. If not for the Chinese, the US would long ago have dealt a death blow to the regime.

Israel has moved Russia as far away from Iran as it can on its own. It is enough to stop convoys of North Korean weapons from crossing into Lebanon.

But it isn’t enough to cause serious harm to Tehran or its clients.

The only government that can do that is the American government.

Trump built his career by mastering the art of deal making. And he recognized that Obama’s deal with Iran is not the masterpiece Obama and his allies claim but a catastrophe.

The Iran deal Trump needs to make with the Russians is clear. The only question is whether he is willing to pay the political price it requires.