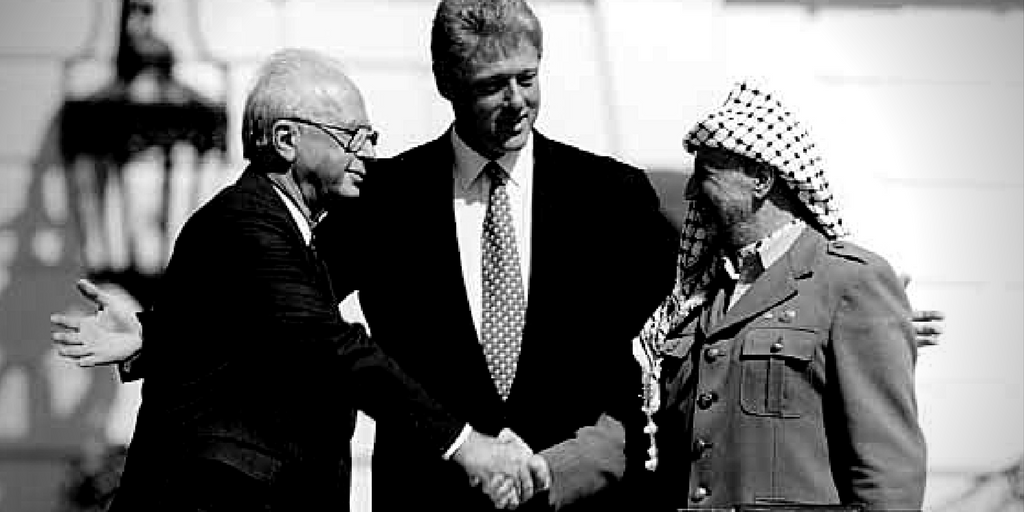 Given the resistance to removing hundreds of thousands of Jews from their ancient homeland in Judea-Samaria, an egregious idea is emerging: Instead of evacuation, abandonment

The notion of abandoning Jews anywhere to the mercies of hostile regimes strikes me as frankly immoral. The idea that Jews living (with the full approval, I might add, of successive Israeli governments) in Judea and Samaria, should be somehow consigned to the whims of a Palestinian state, suffused with anti-Jewish racism, strikes me as frankly obscene.- Geoffrey Alderman,  “Plan for settlers that’s naive and dumb”, The Jewish Chronicle, January 3, 2014.

Just when you thought the political debate in Israel could not get any crazier—it does.

A cavalcade of craziness

The last two and a half decades, have seen the emergence of several wildly delusional proposals for dealing with the “Palestinian problem”—from both sides of the political spectrum.

Thus, for example, on the Left, the dominant paradigm has been support for the antithesis of all the values the Left professes to ascribe to i.e. the endorsement of a giant Gaza-like entity  on the eastern approaches of  Tel Aviv,  (mis)governed by a misogynistic, homophobic, Islamist tyranny—a.k.a. the two-state principle.

On the Right, proposals range from formulas for the Lebanonization of Israel (via annexation of all of Judea-Samaria, without any clear idea of how to contend with the Arab population resident there), to those for the Balkanization of Israel (via annexation of parts Judea-Samaria, leaving the recalcitrant Arab population largely encapsulated in scattered, disconnected enclaves).

Lately, these calamitous prescriptions have been embellished by similarly unhinged appendages—such as the suggestion to provide the terror-regime in Gaza with a port, despite the fact that, in times of non-belligerence, the modern port of Ashdod, barely 20 miles to the north, can supply all of Gaza’s needs—and in times of  belligerence, Israel has a keen interest in denying Gaza any port services!

In my column last week, I discussed the harebrained scheme to convert Judea-Samaria into a mega-South Lebanon by unilaterally removing the Jewish civilian presence there, but leaving the IDF deployed in a territory over which Israel eschews any claims to sovereignty—thereby, in effect, replicating the conditions that prevailed in the “security zone’ in South Lebanon, which precipitated the 2000 IDF unilateral withdrawal—with undignified haste.

This of course is not an exhaustive list of all the inane initiatives that have been inserted into the political debate in Israel.

Only last week, an additional idea surfaced—or rather, resurfaced.

It was a real doozy.

It  was the suggestion that, sometime somehow in the future,  it would be not only  possible politically, but acceptable morally, to leave (read “abandon”) Jewish communities across the  pre-1967 Green Line as enclaves, within  some future  Palestinian state, with no territorial contiguity with “mainland” Israel.

To the best of my knowledge, the proposal first emerged several years ago. It was articulated in an article published by the well-endowed Institute for National Security Studies (INSS), entitled Jewish Enclaves in a Palestinian State.  It was authored by Gideon Biger, professor emeritus in Tel Aviv University’s Department of Geography and Human Environment and Gilead Sher, a senior research fellow at INSS and head of its Center for Applied Negotiations, who formerly served as Head of Bureau and Policy Coordinator for Prime Minister Ehud Barak, and Chief negotiator in talks with the Palestinians (1999-2001).

In it, they acknowledge: “…the evacuation of tens of thousands from their homes and their settlements, including forcible evacuation of those who refuse to leave at the behest of the government, is a difficult task for the country, and could potentially result in bloodshed and civil war.”

Accordingly they suggest: Thus there is a need to examine other, less conventional ideas that could reduce the number of Israelis living beyond the final borders of the State of Israel who will need to be evacuated, including the idea of retaining Jewish settlements as enclaves within the borders of a Palestinian state”.

An article, published several months later by Prof. Alexander Yakobson, a research fellow at the Shalom Hartman Institute, entitled “How to deflate the settlements as an issue” expressed similarly egregious sentiments.

In it Yakobson writes: “…the number of settlers there is far higher than on previous occasions when Israel evacuated settlements in Sinai and in Gaza. Many believe that we are fast approaching – if we have not already passed – the point of no return, when the two-state solution becomes infeasible…”

Yakobson stoutly rebuffs any such pessimism regarding the prospects of two-statism.  According to his vision: “…if we are talking about real peace, why can’t there be a Jewish minority in a Palestinian state? The future peace …should recognize the right of those Jews who will find themselves on the Palestinian side of the border to continue living there … as a minority under Palestinian sovereignty”.

This is a question that is both callous and cynical—and one for which Yakobson himself provided the answer, admitting: “…It is true that precedents for Jews living under Arab sovereignty, in the decades since Israel’s independence, are not encouraging: No Jewish community has been able to survive anywhere in the Arab world.”

This somber assessment of the ramifications of leaving Jews in a Palestinian state is shared by Biger et Sher, who, perversely, raise the prospect of precisely such a policy: “…there is a decided possibility of friction and clashes between the enclaves and their Palestinian surroundings, which could develop into a state of high intensity open conflict. Many experts believe that from political, security, and practical aspects, the idea is not at all feasible, even in a state of full peace.”

In past columns, I have harshly criticized both Biger et Sher (see Infuriating, Insidious, Immoral) and Yakobson (see Mainstreaming Treason?)

Indeed, given the fact that they all seem entirely aware of the probable gory consequences of their proposal, it is difficult to repudiate the charge that it reflects features very reminiscent of the offences of “reckless endangerment” and/or “depraved indifference.

Without engaging in scholarly debate regarding the legalistic differences between the two concepts, it would, in informed layman’s terms, be true to say, that the defining characteristic common to both these terms is that they each entail conduct exhibiting a clear disregard for the foreseeable consequences of the act involved—wfhich creates a substantial risk of serious physical injury to others. Significantly, the focus in these offenses is on the risk created by such conduct, not the actual injuries resulting.

So clearly, whatever the sentiments in the hearts of the enclave-enthusiasts, their proposal to abandon Jews living across the pre-1967 Green Line to Palestinian jurisdiction, in effect, comprises a call for conduct that displays stark disregard for foreseeable consequences of the measures involved, thus creating a substantial risk of serious injury to others.

So, reckless endangerment or depraved indifference?

As this is so glaringly apparent, one might have expected such proposals—or any like-minded derivatives—would have been long removed from the public discourse—once and for all.

Sadly, however, as we shall see, this is not the case.

Clearly, the proposal to abandon Jews to alien sovereignty comprises a grotesque inversion of the Zionist ethos, which always strove to achieve the opposite – bringing Jews to live under Jewish sovereignty.

Perhaps it was the uneasy recognition of this that has led to a recent revision of this pernicious and perilous proposal.

In an opinion piece last week, Biger once again referred to the idea, claiming that Netanyahu had raised the possibility with the Trump administration, stipulating that any Jewish communities left behind would—even if territorially detached—remain under Israeli sovereignty.

He notes: “A similar proposal has been raised in the past in discussions with the Obama administration. Later Netanyahu abolished the idea knowing that it would face right-wing opposition.”

Biger’s contention is corroborated by a Haaretz report, according to which Netanyahu did indeed discuss the “enclave option”. The report claims: “…Netanyahu brought up with U.S. officials the ‘Belgian-Dutch model,’ in which settlements that won’t be annexed will remain as Israeli enclaves”.

Astonishingly, Haaretz sees this willingness to abandon Jews as a “hardening” of Israeli positions, stating: “This is a harsher position than the one he [Netanyahu] presented Obama, when he suggested that settlers who wished to stay in their homes would do so under Palestinian jurisdiction”.

Despite all its fatal flaws, Biger still seems to cling to it with enthusiasm, claiming that it will obviate “the need to evacuate about 100,000 Jewish settlers” in the event of any agreement with the Palestinians.

In an attempt to establish the plausibility of this macabre proposal, Biger, who is credited with being, “an expert in international borders”, rattles off a list of locations on the globe where such enclave arrangements exist—each example conspicuous by its irrelevance to the Arab-Israeli conflict, in general and the Israeli-Palestinian conflict, in particular.

Indeed, it is difficult to grasp how Biger—or any other enclave-enthusiast—envisages how such isolated entities could be sustained over time—much less develop and prosper.

Clearly, any infrastructure systems serving them—such as power and water conveyance—would have to pass through Palestinian territory, leaving them hopelessly exposed to repeated disruption by the myriad of hostile elements among the local population.

Moreover given the fierce and unequivocal rejection by the Palestinian leadership of any notion of residual Jewish settlers remaining within the confines of some future Palestinian state, Biger’s prognosis that such enclaves “will remain under Israeli sovereignty and their residents will remain Israeli citizens in all respects….free access to these enclaves through the territory of the independent Palestinian state will be guaranteed”, seems wildly detached from any foreseeable reality.

No less risible is Biger’s whimsical question with which he concludes his article: “Will Netanyahu’s proposal to Trump be fulfilled and give Netanyahu and Trump the Nobel Peace Prize.  But on second thoughts, given the identities (and deeds) of several previous laureates, who knows…

Little analytical acumen is required to foresee the gruesome consequences that will evolve should this iniquitous idea be implemented. It is almost inevitable that the envisaged enclaves will be unwelcome in their hostile surroundings—and soon become a focus of friction.

There is no doubt that huge resources will have to be devoted to sustain such Jewish enclaves, preserve their security and the safety of the inhabitants.  It is unlikely that they will be afforded sufficient areas to sustain much local employment, not to mention future development and expansion. Residents will require constant and heavy military escort whenever they wish to avail themselves of the promised “free access”, to and from the enclaves. Every social outing or trip to work will become a perilous adventure.

Soon, calls within “Israel proper” will begin to clamor to curtail the expenditure on such futile entities and divert resources to other goals. The government will come under relentless and growing pressure to cut back on outlays devoted to the preservation of these enclaves, which will be left to wither and expire. Their inhabitants will be left to fend for themselves, literally risking being torn limb from limb—or to return, destitute, to “Israel proper”…

The emerging threat to the Jewish communities today is less government-coerced evacuation and more government-initiated abandonment.

So, although the device of “enclaves” is presented as a measure to preserve Jewish presence in Judea-Samaria, in reality it is little more than a pretext to dismantle it, in stages, and circumvent the inevitable resistance to proactive evacuation, and the national trauma that will entail.

Accordingly, it must be exposed for what it really is—and nipped in the bud before it can gather any significant momentum.