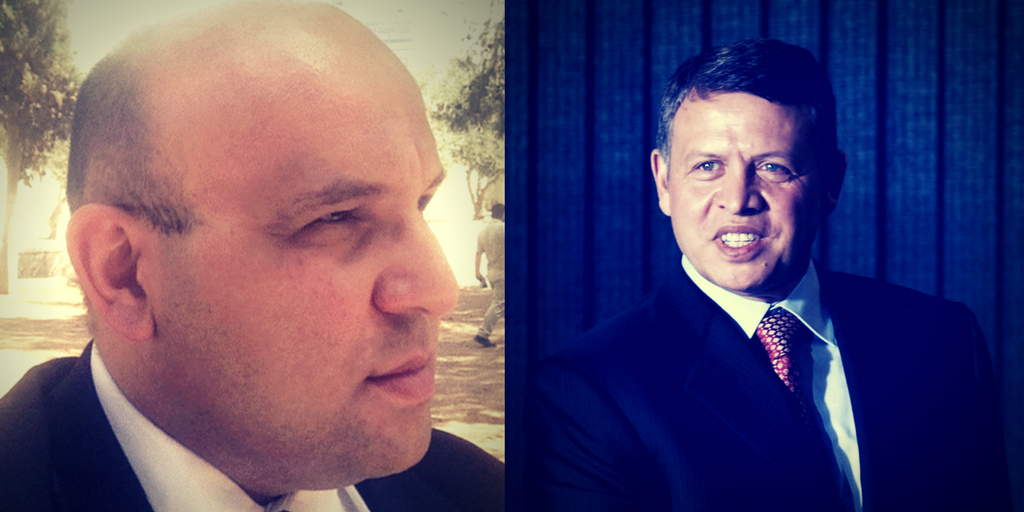 Of all the “Right-wing” alternatives for the two-state formula, the “Jordan-is-Palestine” concept is the only one not inconsistent with the underlying principles of the “Humanitarian Paradigm”

Jordanians and Palestinians are considered by the PLO as one people -Farouk Kaddoumi, Head of the PLO Political Department, Newsweek, March 14, 1977.

The truth is that Jordan is Palestine and Palestine is Jordan -King Hussein of Jordan, Amman, 1981.

Let us not forget the East Bank of the Jordan [River] where seventy percent of the inhabitants belong to the Palestinian nation.  George Habash, leader of the PFLP of the PLO, February 1970.

Next Tuesday (Oct 17), a well-publicized conference on the “Jordan-is-Palestine”  idea, as the preferred resolution for the Israel-Palestine conflict, will be held at the Menachem Begin Heritage Center  in Jerusalem, organized by Ted Belman, editor, the well-known news blog, Israpundit  and  Mudar Zahran, Secretary-General of the Jordan Opposition Coalition.

In many ways, this is a welcome initiative—for, clearly, the future of the country on Israel’s eastern (and longest) border is a matter of vital strategic interest, especially in the current era of turmoil and tumult. Accordingly, debate on prospective scenarios for change in the prevailing conditions in Jordan is undeniably imperative.

Regrettably, however, for reasons not entirely clear to me, the conference generated some inappropriate and uncalled-for ad hominem acrimony between its organizers/initiators and other opponents of the two-state paradigm—which a good number of potential “Jordan-is-Palestine” supporters found both distasteful and perplexing, and which did little to bestow credit on the event itself.

Indeed, I should like to distance myself from this lamentable and largely internecine “dustup” and urge opponents of two-statism to focus their energies on discrediting this perilous and pernicious prescription, and/or on the substantive defects they may identify in some of the alternatives proffered to replace it.

It is true that, in the past, I have myself expressed severe criticisms of some of the alternatives formulated by several “Right-wing” pundits.  However, I have tried—and, hopefully, succeeded—in confining my censure to what I considered to be material flaws in their proposed policy recommendations, rather than personally denigrating their proponents.  If my past critiques have been otherwise interpreted, this was never my intention.

Several followers of my work have raised a surprised eyebrow on learning of my participation in the “Jordan-is-Palestine” conference.

Their surprise is understandable. After all, I have never been a strident advocate of the “Jordan-is-Palestine” doctrine, on the one hand; on the other, I have advanced—rigorously, regularly and resolutely—an ostensibly different policy prescription, which I have designated the “Humanitarian Paradigm”, entailing generously funded relocation and resettlement of the Palestinian-Arabs in third party countries.

My adoption of the Humanitarian Paradigm is not motivated by a flare of ideological fervor. Rather it is the necessary culmination of a rigorously deductive—indeed, almost mathematical— analytical process.

The point of departure for this deductive analysis is the realization that for Israel to endure as the nation-state of the Jewish people, it must contend effectively with the twin imperatives of geography and demography. Indeed, this is virtually a self-evident truth, for as I have repeatedly noted, if Israel fails to address either its Geographic or Demographic Imperatives adequately, it will become untenable as the Jewish nation-state—either geographically or demographically…or both.

Moreover—as I have argued frequently in the past—to effectively address the Geographic Imperative, Israel must retain sovereignty over all the territories across the pre-1967 lines (or at least, over a sufficiently large portion of them to make any prospect of a Palestinian state unfeasible).

Likewise, to address the Demographic Imperative, Israel must drastically reduce the non-Jewish presence within the territory under its sovereign rule. This is true even if the optimistic demographic estimates are correct and were Israel to annex all the territories of Judea-Samaria, there would still be—initially—a Jewish majority of 60-65% (and conversely, a Muslim minority of 35-40%).

In this regard—i.e. in addressing Israel’s twin imperatives—the “Jordan-is-Palestine” option is qualitatively different from virtually all other policy blueprints advanced by “Right-wing” opponents of “two-statism”.

For if the “Jordan-is-Palestine” option advocates: (a) the relocation/rehabilitation of the Arab residents of Judea-Samaria in territory that currently comprises the Hashemite monarchy; and (b) Israeli sovereign control of all the territory west of the Jordan; then this is merely a special case of the Humanitarian Paradigm.

After all, if the general principle underlying the Humanitarian Paradigm is that the Arab residents should be relocated/rehabilitated in third party countries, leaving the choice of destination to the recipients of the relocation/rehabilitation funds, there is nothing that precludes Jordan from being such a potential destination.

Accordingly, at the conceptual level, there is no substantive contradiction between the geographic and demographic outcomes that the Humanitarian Paradigm prescribes, and those that the “Jordan-is-Palestine” option is designed to produce.

This clearly cannot be said of the other alternative “Right-wing” proposals for the two-state formula, which, without exception, do not propose any measures for diminishing the Arab presence west of the Jordan River. Indeed, if anything, they all prescribe mechanisms for perpetuating a growing permanent Arab population—either under direct Israel sovereignty or in emaciated and disconnected enclaves, with limited self-rule for little more than municipal activities.

So, setting aside the matter of practical feasibility, I would not, in principle, oppose the implementation of the “Jordan-is-Palestine” option, entailing the relocation/rehabilitation of the Arab residents of Judea-Samaria in present day Jordan.

This, however, is not the case for other proffered alternatives formulated by leading “Right-wing” figures—to whose implementation I would be vigorously opposed—both in principle and in practice.

This is true for proposals such as those of Caroline Glick, which call for annexation of all of Judea-Samaria and the incorporation of its Arab residents into the permanent population of Israel, with a possible path to full citizenship. It is also true for proposals such as Education Minister Naftali Bennett’s partial annexation of Judea-Samaria and Dr. Mordechai Kedar’s semi-autonomous city-state idea. It is likewise true for the proposal advanced by former Tourism Minister, the late Benny Elon, which envisions giving the current Jordanian regime authority for administering municipal affairs and maintaining law and order for the Arab population in Judea-Samaria.

I have set out elsewhere the  detailed arguments for my rejection of these proposals, which in many ways, I see as being more dangerous and detrimental than the two-state proposition itself, that they were designed to replace—see for example To my colleague Caroline, a caveat ; Sovereignty? Yes, but look before you leap;  Islamizing Israel – When the radical Left and hard Right concur ; Annexing Area C: An open letter to Naftali Bennett;  Sovereignty? Yes, But beware of annexing Area C.

I will, therefore, refrain from repeating them here and move on to discuss other aspects of the “Jordan-is-Palestine” proposal – including caveats and reservations as to practical feasibility and tactical desirability.

Of course, one does not have to be a “radical Right-wing extremist” to embrace the “Jordan-is-Palestine” concept.

To the contrary, as the introductory excerpts clearly show, it has been embraced for decades by leading political figures—both Jordanian and Palestinian. Indeed, both admit that a separate “Palestinian national identity” is no more than a contrived construct to undermine Jewish claims to sovereignty over the Land of Israel.

Significantly, precisely this position was expressed ten years earlier by PLO executive council member, Zuhir Muhsein, in an oft-cited, but never rebuffed, 1977 interview: “[It is] just for political reasons [that]we carefully underwrite our Palestinian identity. Because it is of national interest for the Arabs to advocate the existence of Palestinians to balance Zionism. Yes, the existence of a separate Palestinian identity exists only for tactical reasons. The establishment of a Palestinian state is a new tool to continue the fight against Israel and for Arab unity.”

Indeed, even in their “National Covenant” the Palestinian-Arabs not only affirm that their national demands are bogus, but that they are merely a temporary instrumental ruse to further a wider pan-Arab cause.

In it (Article 12), they declare: “The Palestinian people are a part of the Arab Nation… [H]owever, they must, at the present stage of their struggle, safeguard their Palestinian identity and develop their consciousness of that identity...”

So again, we are compelled to ask: What other nation declares that its national identity is merely a temporary ploy to be “safeguarded” and “developed” for the “present stage” alone? Does any other nation view their national identity as so ephemeral and instrumental? The Italians? The Brazilians? The Turks? The Greeks? The Japanese? Of course none of them do.

But apart from the manifestly fictitious nature of the claims for a separate Palestinian national identity, the claim that “Jordan is Palestine” has much to support it, historically, geographically and demographically.

After all, historically, Jordan did in fact comprise the greater portion of Mandatory Palestine, geographically covering almost 80% of its territory, while demographically, a clear majority of its current population are ethnically Palestinian-Arabs. Moreover, until summarily, and arguably, illegally, stripped of their citizenship by King Hussein in 1988, all the Arab residents of the “West Bank” were Jordanian citizens.

Indeed, this abrupt measure was tersely described by Anis Kassim, a prominent Palestinian legal expert, as follows: “… more than 1.5 million Palestinians went to bed on 31 July 1988 as Jordanian citizens, and woke up on 1 August 1988 as stateless persons.”

Not much room for ambiguity there.

However, although a strong case can be made for the claim that, in principle, Jordan is (or at least, should be) Palestine, serious questions can be raised as to the practical feasibility of the idea as a realistic and desirable policy prescription—which brings me back to the upcoming conference and my decision to participate.

With regard to Jordan, one thing ought to be beyond dispute: The working assumption of Israel’s long-term national strategic policy-makers should—indeed, must—be that the current Hashemite regime does not have an indefinite “shelf-life”. In fact, prudence dictates that it should be assumed to be shorter rather than longer—for reasons which are largely beyond Israel’s control. Accordingly, Israel must prepare for the tangible prospect of regime-change.

In this respect, the conference organizers urge a proactive approach, seeking to persuade the US administration that the current regime should be induced to fall and be replaced by a regime led by Zahran, which would represent the Palestinian majority, purportedly be secular (or at least, non-Islamist) and favorably disposed towards Israel.

I have no way to evaluate Zahran’s credentials or political clout, should a successor to the current regime become a tangible prospect. Consequently, my participation should not be construed as an endorsement of his “candidacy” for such a role, although I have little doubt that he would be far more palatable to Israel than some Muslim Brotherhood affiliate at the helm of a new regime. That said however, I am not sure I would wager on his victory should a clash for power arise between his faction and rival Islamist antagonists.

The other question to be asked is: Should Israel and/or the US endeavor to underpin, or to overthrow the ruling Hashemite dynasty? Indeed, whether they should try to extend the rule of the “devil we know” or risk the advent of a “the devil we don’t” is a legitimate debate.

However, as recent events in the Mid-East have shown, regime-change in the Arab world is typically unexpected and often independent of what outside powers do—or don’t do. Accordingly, by forcing debate on such a contingency in Jordan, the conference is providing a valuable service.

This—together with the fact that the “Jordan-is-Palestine” prescription does not substantively contradict my preferred “Humanitarian Paradigm”—comprises the reasons that I agreed to participate.