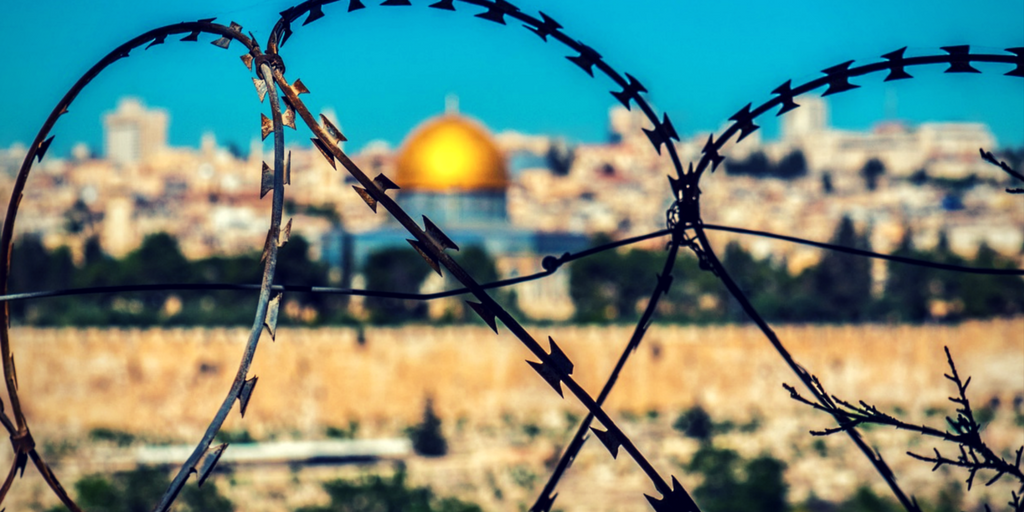 Even after seven decades living under Israeli sovereignty, and over half a century after military rule over the Arab population was abolished, anti-Israel enmity is alive and kicking among Israeli Arabs

Extending Israeli sovereignty over Judea-Samaria (and eventually over the Gaza Strip) is indeed a necessary condition for ensuring the ability of Israel to endure as the nation state of the Jewish people. It is, however, not a sufficient condition to ensure that worthy objective.  In fact, without additional complementary measures, such an initiative on its own is very likely to imperil Jewish sovereignty over the Land of Israel…in its entirety on both sides of the pre -1967 Green Line. “The Humanitarian Paradigm”, Sovereignty Journal (No. 8), March, 2017.

And yet while many condemned the heinous deed, expressing shock, dismay, and opprobrium at the brutal desecration of the Temple Mount, no one really found it bewilderingly inexplicable or staggeringly aberrant.  After all, Judeocidal Arab hatred has always defied rational explanation.

No less perverse was the fact that the alleged cause of the killers’ homicidal urge was purported to be the “Occupation”, despite the fact that none of the perpetrators were subject to any form of “Occupation”—as they were all Israeli citizens,  with full civil rights.

But beyond the human tragedy, the hail of bullets that cut short the lives of the two Druze police officers from the Galilee, Hayil Satawi and Kamil Shanaan, inflicted an additional casualty.

For they conclusively cut down any residual credibility that the proposal for a one-state formula—especially as touted by “right wing” pundits—might still have had. Indeed, it totally extinguished any lingering hopes that some kind of coherent, cohesive society could be forged if Israel were to annex Judea-Samaria—and incorporate its Palestinian Arabs into Israel’s permanent population.

As I have written elsewhere, “It would require more than a gigantic leap of unsubstantiated faith to believe that such a measure could precipitate any result other than “Lebanonization” of Israel.”   (For good order’s sake—and to cite New York Times columnist, the late A. M. Rosenthal—“Lebanonization  refers to the [situation] within a single country so riven with religious and other disputes that [it] becomes impossible to govern.”

Typically one-state proponents seem unaware, or unperturbed, by this unpalatable prospect. Thus, one prominent one-stater sees the process of imposing Israeli sovereignty over Judea-Samaria and its Arab residents as “fairly straightforward”. According to this upbeat prescription: “Israel will apply its laws to Judea and Samaria and govern the areas as normal parts of Israel…Contingent on security concerns…Palestinians will have the right to travel and live anywhere they wish within Israeli territory…Palestinians will have the same legal and civil rights as the rest of the residents and citizens of Israel… Those that receive Israeli citizenship in accordance with Israel’s Citizenship Law will also be allowed to vote in national elections for the Knesset.”

Thus one-state advocates have tried to dismiss the potential for inter-ethnic strife, suggesting that “an Israeli assertion of central authority over the areas [of Judea-Samaria] will likely have a significant moderating impact. Once the population feels there is a central governing authority in place, that sense of order will likely neutralize a significant amount of opposition momentum spurred by anti-Israel animus.”

Clearly, the events on the Temple Mount last Friday shatter the foundations of any such belief.

After all, the gunmen’s conduct—and the reticent reaction of the Israeli-Arab leadership—clearly indicates that, after seven decades of living under Israeli sovereignty, and over half a century after military rule over the Arab population was abolished, “anti-Israel animus” is alive and kicking even among Israeli Arabs—despite decades of “Israeli assertion of central authority” .

Not an isolated incident

Moreover, while Judeophobic terror attacks by Israeli-Arabs are not a frequent occurrence, neither are they virtually unheard of rarities.

Thus for example, on New Year’s Day, 2016, an Israeli-Arab from the village of Arara, just south of Umm al Fahm, the town from which last Friday’s killers hailed, opened fire with an automatic weapon on a crowd in a Tel Aviv pub, killing two and wounding almost ten. The shooter also murdered an Israeli-Arab taxi driver in his attempt to escape.

Significantly, he was provided  shelter and logistic support from residents of the village, with whom he discussed plans for additional attacks.

However, as distressing as these and other individual acts of terror might be,  no less disturbing is the reaction of the Israeli-Arab Establishment, including its elected political leadership and prominent civil society organizations.

Reflecting the ambivalent Arab attitude towards lethal attacks by their kinfolk on the Jewish state, was the vague and equivocal condemnation of the Temple Mount attack by the Arab leadership in Israel.  Indeed, it was so reticent and reluctant that it even provoked a flash of ire from our meticulously politically-correct President, Reuven Rivlin.

Referring to the lack of any unambiguous denunciation of the deed almost three days after it was perpetrated, an exasperated Rivlin declared:  “The silence and the feeble responses from some Arab political leaders are outrageous…Terrorism must be denounced unconditionally”, adding. “Anyone who doesn’t denounce terrorism is collaborating with it.”

Of course, in recent years there have been far more explicit examples of an elected Israeli-Arab politician   brazenly collaborating with terror.  Perhaps the most blatant was that of former Knesset member of the Balad faction in the Joint (Arab) List, Basel Ghattas.

Ghattas, a Christian Arab Israeli, from the town of Rameh in the Galilee, was jailed,  after he was filmed, abusing his parliamentary privileges, smuggling  mobile phones, SIM cards and other items to convicted terrorists in prison for involvement in lethal attacks against Israelis. Despite his sentencing for violation of the Terror Law, Ghattas remained unapologetic, expressing neither remorse nor regret for his actions.

But his was not the only display of identification of elected Arab lawmakers with mortal enemies of the country in whose legislature they serve.

In February 2016, three members of the Joint (Arab) List met with the families of terrorists to express condolences and identification  with their suffering, even referring to terrorists who killed three passengers on a bus in Jerusalem as shaheeds (martyrs).

Another Arab MK, Jamal Zahalka, has openly identified with the Palestinians’ armed resistance against Israel and publicly called for Arabs to prevent Jews from visiting Judaism’s most holy site by “all means” and at “all costs”.

Hanin Zoabi is of course another Arab lawmaker, who has been conspicuous in her continual expression of anti-Israel enmity over the years, including her 2010 participation aboard the infamous Mavi Marmara, in the attempt to breach the maritime quarantine imposed on the terrorist ruled enclave of Gaza.

In light of these and other manifestation of borderline sedition it is not difficult to understand the caustic censure of Deputy Foreign Minister Tzipi Hotovely, who reacted to the ongoing identification with the enemy with fury:”…the Arab MKs don’t miss a single opportunity to support terror.”

Regrettably, the response of Israeli-Arab civil society organizations gives no less cause for concern.

So  rather than express shock at the defilement of the holy site by the actions of Arab terrorists, and raising questions as to how similar incidents can be avoided, Adalah, generously funded by the US based “New Israel Fund” demanded an “immediate probe of police killings of [the] Al Aqsa Mosque shooting suspects.”

Accordingly,  instead of focusing on the murderous actions of the Israeli-Arab perpetrators, Adalah purposely tried to divert attention to the reactions of those who cut their homicidal spree short.

In a transparent attempt to obscure Arab malfeasance, while denigrating the preventative response by Israeli forces, it writes with unabashed gall:  “the incident raises serious questions regarding police personnel’s compliance with very detailed open-fire regulations”.

This anti-Israel sentiment is reflected in pervasive—albeit, as yet, inert—bias in the general Israeli Arab public.   This dormant anti-Zionist proclivity is clearly evident in a 2013 poll conducted by Prof. Sami Smoocha, under the auspices of the University of Haifa and the Israel Democracy Institute, both of whom are decidedly on the Left of the Israeli political spectrum. According to the findings of the study:  55.9% of [Israeli] Arabs resigned themselves to Israel as a state, with a Jewish majority…

However, as Smoocha points out: “resignation… does not mean preference… the Arabs prefer a binational state to a Jewish and democratic state. [N]or does it imply justification of the status quo, since 69.6% of the Arab respondents think that it is not justified that Israel maintains a Jewish majority….”

Gloomily, he notes: “The percentage of Arabs holding accommodating and compromising stances has been steadily decreasing and has shrunk to a minority.”

One-statism: The Writing on the wall

Should any further evidence be required as to the dire consequences of a dramatic increase in Israel’s Arab population, they were provided by the results of the 2015 elections, when virtually to a man—and fully enfranchised woman—the Arab sector voted for the vehemently anti-Zionist Joint List. This is a party made up of a motley mélange of communists-cum radical Islamist-cum-leftwing Arab nationalists, whose only unifying factor is their fierce rejection of Israel as the nation-state of the Jewish people.

Indeed, the political DNA of the Joint List is so rabidly opposed to the Jewish state that it refused to sign a surplus vote sharing agreement even with the far-left Meretz party, because it was still a “Zionist” faction, vividly underscoring its obdurate repudiation of the right of Jews to a state of their own, repudiation, which it seems, Israeli-Arabs endorsed virtually unanimously.

Today, the Joint List – with 13 seats—is the third largest party in the Knesset, with Israel’s (potentially recalcitrant) Arab population within the pre-1967 “Green Line” now at around 20%. Accordingly, little imagination is needed to grasp the dramatic impact—socially, economically, politically—of doubling it to around 40%.—by extending Israeli sovereignty to Judea-Samaria to incorporate  the Arab residents in the country’s permanent population (assuming the optimistic demographers are right).

The Temple Mount incident, together with the pervasive anti-Zionist sentiment in the Israeli Arab sector,  underscores just how unfounded the optimism of one-staters is that: “Once the population feels there is a central governing authority in place, that sense of order will likely neutralize a significant amount of opposition momentum spurred by anti-Israel animus.”

Indeed, if anything, quite the opposite is true: Reinforced by a huge increase in numbers, the anti-Israel animosity is likely to be commensurately enhanced.

If Israel has no program to significantly reduce the Arab presence in its sovereign territory, it will face a searing demographic dilemma. It can either (a) enfranchise the bulk of the newly annexed Arab population within a reasonable timeline; or (b) it can deny them such enfranchisement.

If it opts for the latter, Israel will inevitably become an undeniable apartheid state—withholding political representation largely on ethnic grounds.  As such it is likely to be subjected to crippling international censure and sanctions, imperiling its ability to survive.

If it opts for the former, it will create a very real danger that the anti-Zionist elements will become the dominant political force in the country, with the Arab vote potentially reaching 25 seats—making it possibly one of the two largest parliamentary factions. If they team up with the radical anti/post Zionist Left, its ability to advance anti-Zionist initiatives will be formidable…

And this is only the tip of the proverbial “iceberg”…which is why I warned (see introductory excerpt): “Extending Israeli sovereignty over Judea-Samaria  is indeed a necessary condition for ensuring the ability of Israel to endure as the nation state of the Jewish people…but without additional complementary measures, such an initiative on its own is very likely to imperil Jewish sovereignty over the Land of Israel… on both sides of the pre -1967 Green Line”.