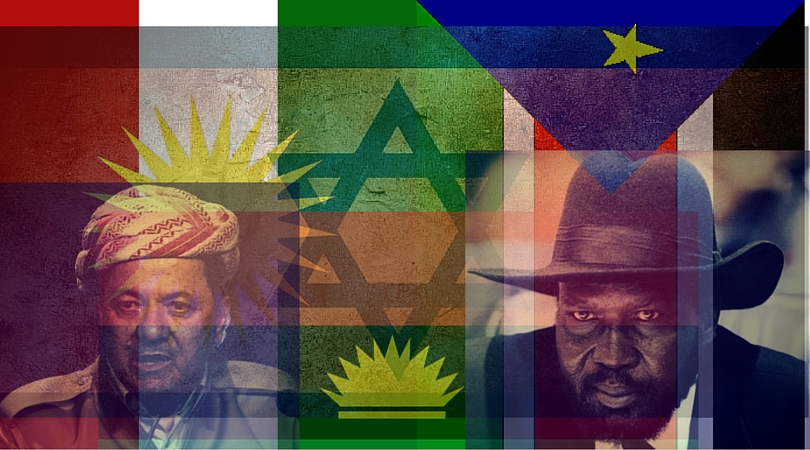 It is no secret that Israel’s foreign policy has shifted in the last decade to aiding developing countries and regions that share a concurrent enemy in regards to radical Islam.  Most of the time Israel extends its hands in the form of technology and aid, but two nascent states have received far more.

Kurdistan has been an independence project long in the making.  Nestled in Northern Iraq, Syria, Southeastern Turkey, and Western Iran, the Kurds are largest indigenous people without a state. Israelis covert cooperation has been primarily focused on ties to the Kurdistan Regional Government in Iraq (KRG). The ties in the past included weapons training, arms, and other intelligence support.  It cannot be confirmed whether or not there is still a military aspect to the relationship, but it is said Israel enjoys Kurdish oil and helps it transfer the oil to Europe and beyond.  Most analysts believe Israel has been instrumental in helping the Kurds build the Peshmerga into a serious fighting force in which their future independence relies.

An independent Kurdistan plays well in the Israeli strategy of working with non-radical indigenous actors that will in the future work overtly with the Jewish state when the geopolitical arena warms to Israel’s existence.

The history between South Sudan and Israel goes back to the late 1960’s, long before talk of South Sudan had entered the minds of the global power brokers. Representatives of the Sudanese People’s Liberation Army made contact with Israel in hopes of striking a partnership.  Over the years, Israel has given more than just aid, it has trained and delivered arms to those fighting for South Sudan’s independence. It has been so apparent to all observers the role Israel played in prying South Sudan from the jaws of the Northern Radical Islamist regime in Sudan that the South Sudan president Salva Kiir said the following in his visit to Israel in August 2011:

“Without you, we would not have arisen. You struggled alongside us in order to allow the establishment of South Sudan and we are interested in learning from your experience.”

South Sudan’s independence is a roll back on Iran and its proxies’ drive South into the Sub Sahara.  It also proves how long term relationships in Africa that are built on economy and security can be very effective in the face of radical threats.

Following a similar pattern and necessity in terms of Israel’s geopolitical needs, Biafra is a strong candidate to secure covert aid.  Nigeria was supposed to be Israel’s new Africa ally, but the ascendancy of Islamist Buhari to the Presidency has forced Israel’s government to rethink its strategy.  This is why Biafra, if positioned correctly, could play a vital role in securing the Jewish state’s first long term ally on the Gold Coast.  There is just one challenge, Biafra is no South Sudan.  Last time it tried for independence 3 million innocent Biafrans lost their lives.  Israel will have to weigh whether or not it can be successful in helping Biafra secure freedom.  If so it may be the first time the Jewish state would be able to legitimately plant its flag in West Africa as a partner with the continent’s first Hebraic Nation.