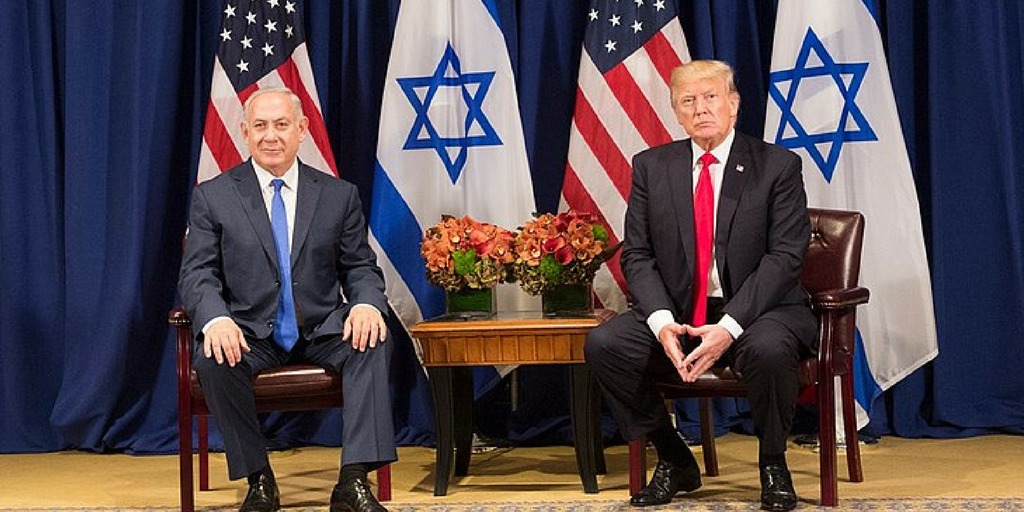 “No one could get past Jerusalem, we’ve taken it off the table,” adding that he believes the Palestinians intend to return to the negotiating table, “and if they don’t, there will be no peace.”

In connection to his potential arrival for the US Embassy opening in Jerusalem, the President said the following: “We’re looking at coming. If I can, I will, but I’ll be there again. Israel is very special to me.”

“Thank you. Mr. President, Donald, Melania, Sara and I want to thank you for your extraordinary friendship and hospitality. It’s always a pleasure to see you both.

This is the first time we meet Washington, America’s capital, after you declared, Mr. President, Jerusalem as Israel’s capital. And this was a historic proclamation, followed by your bold decision to move the embassy by our upcoming national Independence Day.

I want to tell you that the Jewish people have a long memory, so we remember the proclamation of the great king, Cyrus the Great, Persian king 2,500 years ago. He proclaimed that the Jewish exiles in Babylon could come back and rebuild our Temple in Jerusalem. We remember a hundred years ago, Lord Balfour, who issued the Balfour Proclamation that recognized the rights of the Jewish people in our ancestral homeland. We remember 70 years ago, President Harry S. Truman was the first leader to recognize the Jewish state. And we remember how a few weeks ago, President Donald J. Trump recognized Jerusalem as Israel’s capital. Mr. President, this will be remembered by our people through the ages.

And as you just said, others talked about it; you did it. So, I want to thank you on behalf of the people of Israel, and I also look forward to our discussions on both challenges and opportunities.

If I had to say what is our greatest challenge in the Middle East to both our countries, to our Arab neighbors, it’s encapsulated in one word: Iran. Iran has not given up its nuclear ambitions. It came out of this nuclear deal emboldened, enriched. It’s practicing aggression everywhere, including on our own borders. And I think we have to stop this country that chants, “Death to Israel, death to America.” Iran must be stopped. That is our common challenge.

So I look forward to those discussions, but I want to just reiterate what you just said: Mr. President, I’ve been here for nearly four decades with, talking, seeking to build the American-Israel alliance. Under your leadership, it’s never been stronger. And the people of Israel see your position on Jerusalem. They see your position on Iran. They see your magnificent defense of Israel and the truth in the United Nations. And I as prime minister see something that you as president see, but others can’t see. It’s the extent of our intelligence and other cooperation in matters that are vital for the security of both our peoples.