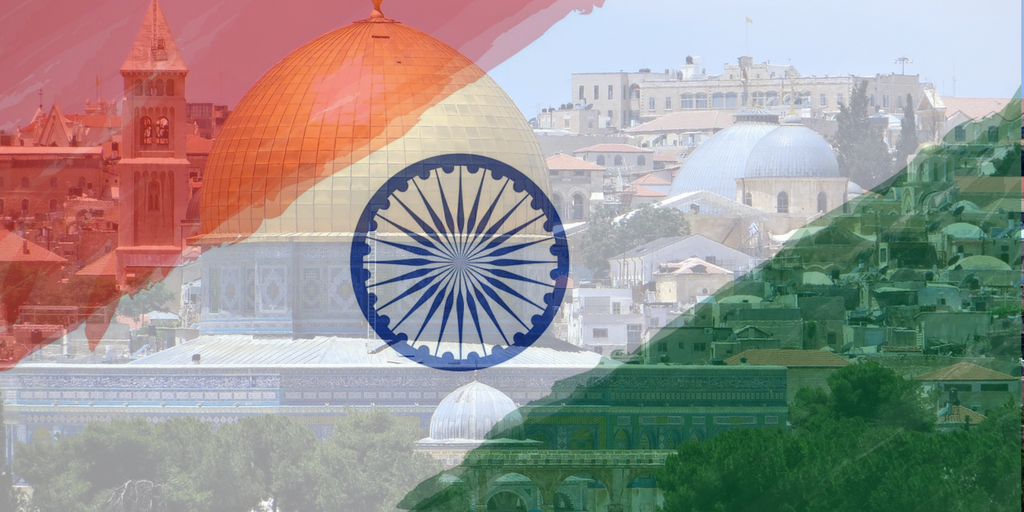 When does an Indian become an admirer of Israel? I do not know. It almost happens spontaneously and naturally. Then to become an anti-Semite, Israel-hating Palestine supporter it takes years of left-wing indoctrination.

There are ‘intellectuals’ and ‘analysts’ who say Indian Israeli supporters are similar to the evangelical Israeli supporters in the United States(US) – the typical US right-wing. No. There is a vital difference. For the evangelical supporters of the US, the formation of Israel is part of the fulfillment of their scriptural prediction. These are events bound to happen in their concept of end-time. Hence they support Israel. However, they do not have any innate value and love lost for Israel or Judaism as an equal but separate spiritual heritage of humanity.

What about Hindus? Perhaps, it is just the common purpose of Islamist opposition that unites Hindus and Hebrews? The answer is a clear “no”.

Beyond the problem of the so-called common enemies, Hindus and Jews are united by deep spiritual and cultural ties.

For centuries, if not millennia, Hindus have had connections with Hebrews. And despite Hinduism being a non-monotheistic religion which allows an infinite variety of spiritual paths to flourish within, Indians have been remarkably free of anti-Semitism.

When Anti-Semitism was axiomatic to the world-view of Christendom, a letter attributed to Shivaji, the seventeenth century formulator of the concept of Hindavi Swaraj, addressing the Mughal despot Aurangazeb, spoke about the need for a ‘policy of treating with peace and equality the Christians, Jews, Muslims, Dadu’s followers, sky-worshippers (falakia), malakia, materialists (ansaria), atheists (daharia), Brahmans and Jain priests.’ The letter presents the kernel of the Hindutva worldview. It is not against pluralism and diversity. In fact, it is proactively for preserving pluralism and diversity.
On the other hand, it is against expansionist monocultures of any sect or cult.

Shivaji’s letter recognises the right of Jews to exist as equal citizens and an independent spiritual people.

Thus, Hindutva recognises from its very inception, the Jewish right to live as an ancient and great part of human spiritual heritage. So, the Hindu-Hebrew collaboration in this regard dates back centuries. Gandhian Jewish scholar Yohanan Ben David in his paper, ‘The Jews of India with special reference to the Bene Israel’ writes:

The Bene Israel too felt threatened by the bigotry of Aurangazeb and Shivaji was as much their champion as he was of the Hindus. Even now Bene Israel speak with no less fervour than any Hindu in the ‘Kasba’ at Pune when recounting the deeds of Shivaji. Bene Israel families (even in Israel) preserve Maratha swords as heirlooms. … Kehimkar, for example, mentions the Bene Israel Churrikars who were Naiks of the Angre fleet. For their services, they received land in ‘inam’ and a Sarnad. A Bene Israel called Eloji, a poet, was consulted on financial matters and foreign policy by the Angre. 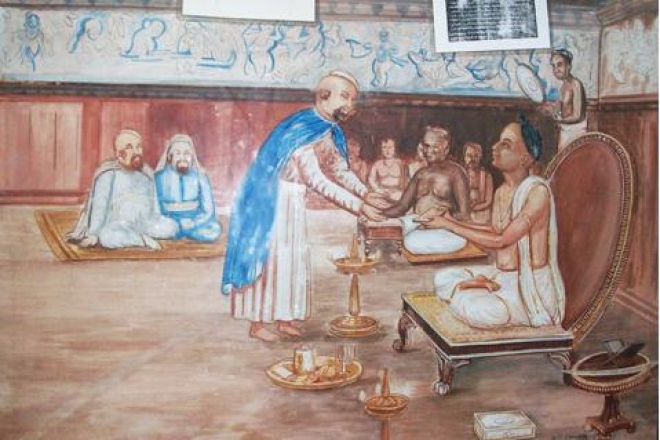 Yohanan Ben David points out that the Bene Israel had become so much part of Maratha society that they even Indianised their first names. ‘Elijah became Eloji; Samuel Samaji; Issac Isaji; and so on’. Elsewhere in South India, according to Jewish chronicles, Hindu king Sri Parkaran Iravi Vanmar granted Joseph Rabban the village of Anjuvannam and entitled the Rabbi to a palanquin and parasol – a royal status. Anjuvannam flourished as a little Jewish kingdom in itself until ‘the Portuguese put an end to this kingdom in 1565’. When the Catholic inquisition threatened the Jews, they fled to Cochin and the Hindu king there offered them protection. Yohanan Ben David makes a pertinent observation here:

For the next four hundred years, the Jews are treated with a liberality that surpasses all understanding. Here it should be emphasized that the Jewish experience in India was unique in Jewish history that there was no antisemitism whatsoever. The Jews were not discriminated against, expelled or exterminated, something that had been their common lot elsewhere.

Thus, Hindutva has consistently recognised the special place of Jews as original contributors to human spirituality, culture and civilisation. It is from this recognition that their love and support for Israel comes.

As against this, the ‘Palestinian’ movement in India has its roots in pan-Islamist, anti-Semitic as well as anti-Hindu politics. Mohammad Iqbal, the intellectual founder and guide of the Pakistan movement during the crucial period of the late 1930s to 1947, in a letter dated 28 May 1937, drew parallels between Hindus and Jews in undivided India and ‘Palestine’ respectively. In this letter, Iqbal even talked of ‘repeating Palestine’ in certain parts of north-west India. Later, in a letter marked ‘private and confidential’ to Jinnah on 7 October 1937, he spoke of the Palestinian issue as ‘a very fine opportunity for mass contact for the purposes of the League’. Muslim League converted these ideas into rabble rousing hate speeches against Hindus, comparing them with Jews, ultimately resulting in the genocidal fury of ‘Direct Action’ day violence against Hindus.

Muriel Lester, in whose house Gandhi stayed during his visit to England was at ground-zero of the Noakhali holocaust at Gandhi’s request. She described the storm troopers of the League as ‘well planned quite a Hitlerian network of folks’. Dr Ambedkar too had discovered Hitlerian methodology in the politics of Pakistan movement:

The Muslims are now speaking the language of Hitler and claiming a place in the sun as Hitler has been doing for Germany. For their demand for 50 per cent is nothing but a counterpart of the German claims for Deutschland Uber Alles and Lebensraum for themselves, irrespective of what happens to other minorities.

The relation between the so-called Palestinian movement and Nazis is today a well established fact. How both Hitlerian anti-Hindu sentiment, as well as the anti-Semitism of the so-called ‘Palestinian’ movement morphed into anti-Hindu Pakistan movement with disastrous results for the Hindus, Sikhs and Buddhists who to this day are targets of genocide (1971) and continuous pogroms, is a much less studied phenomenon.

Jinnah also met here Hassan al-Banna, the leader of ‘Muslim Brotherhood’ and also a close comrade in arms of Mufti. Al-Banna had openly accepted Hitlerian methodology and Nazi hatred of Jews. Combining Nazi anti-Semitism with Islamic anti-Semitism, he noted that Hitler had taught him that the aim of propaganda was to incite ‘wrathful hatred’ and it should be incited as ‘an exterminationist hatred first of the Jews and then of anyone else who opposed Islam.’ (David Patterson, 2012) Al-Banna acknowledged Jinnah as the ‘Muslim leader par excellence’. Jinnah scholar Akbar Ahmed writes regarding the significance of this meeting:

The significance of Hassan al-Banna meeting Jinnah and writing to him in glowing terms is immense. The Muslim Brotherhood has over the last half-century grown in influence throughout the Middle East. Hassan al-Banna’s ideas on Islam, on the revival within the community, on pan-Islamism, on challenging the cultural and political supremacy of the West, on asserting an Islamic identity have had a huge influence well beyond the Arab world. Even today, al-Banna’s ideas reverberate throughout the Muslim world, putting pressure on governments to move towards Islam.

Jinnah, Pakistan And Islamic Identity: The Search For Saladin,Routledge,2005

Thus the support for the so-called ‘Palestinian’ cause has an anti-Hindu element embedded in it historically, whether we like it or not.

What lurks behind the so-called Palestinian movement is not a land problem but a theological inability to accept Jews and Judaism as a separate independent spiritual heritage of humanity having the right for existence. The Replacement theology which is at the heart of both Christian evangelism and puritanical Islamism demand that the Jewish scriptures have been overrun by their own messiah or prophet cults. So, all Jews have to do is to convert to either one of these two religions or, if they do not convert, the very reason for their existence is only to fulfill their role in end-time prophecies of these two religions. Each time a Christian speaks of Hebrew Bible as ‘Old Testament’ he or she inadvertently propagates deeply internalised anti-Semitism. For an Islamist, Jews are not just outdated but also villainous. The prevalent mindset of today’s Arabian common psyche is not much different from the pre-holocaust view of Jews by the Christendom.

Interestingly, the same religious anti-Semitism can be found in that ‘secular’ mutation of expansionist Christianity – Marxism. Karl Marx, himself a Jew whose family converted to a section of virulently anti-Semitic Lutheran Christianity, embraced anti-Semitism in his ideological formulations. Author Louis Rapoport writes:

Long before the alleged Jewish plot discerned by Dostoevsky and the author of the Protocols of the Elders of Zion, Marx inadvertently encourages the anti-Semitic myth that the Jews controlled the world’s money markets. He portrayed the Rothschild banking family as the personification of cancerous capitalism, as would countless as other socialists and in his correspondence made occasional remarks of an incipiently anti-Semitic nature, as when he expressed admiration of ancient Egypt for expelling the ‘nation of lepers’. … The man who became Lenin was not at all personal anti-Semitic, in the manner of Marx or Stalin but he did preach that it was essential for Jews to disappear through total assimilation.

For the right-wing Christians of the Nazi type, the Jews were the problem makers creating Marxist and Bolshevik revolution, so they had to be eliminated. For the left-wing, either the Jews had to disappear, or they were part of the bourgeois elite – the most evil capitalist manipulators against socialism. For the evangelical Christian right-wing, the Jews and Israel have only one value – part of their end-time prophecy. For the Islamists, the Jews are a living negation of their prophet’s claim to be the final prophet and hence they were a cursed people.

Based on this deep hatred and prejudices against Jews, each of these forces had their own reason to oppose Israel, limitedly support it, or weaken it. The theological hatred of course cannot be exhibited as such in modern secular environment today and hence the anti-Semitism of the left provides an excellent secular camouflage. And if Israel itself cannot be deprived of its physical existence, let us at least weaken it psychologically by denying it its rightful ownership of Jerusalem, her spiritual capital, or so seems the case.

Hence, any denial of Israel’s right over Jerusalem as its capital is a denial of human pluralism and true secularism. Let us recognise the fact that Jerusalem primarily belongs to Judaism. Any claim Christianity or Islam may make of the holy city is only secondary and definitely cannot replace the Judaic heart of Jerusalem. For Christianity and Islam, Jerusalem contains some of their holy places whereas for Judaism and the Jew, Jerusalem is in itself completely holy and inviolate. By recognising Jerusalem as the capital of Israel, the Christian and Islamic world can bring themselves out of the theo-psychological cages they have places themselves for almost 2,000 and 1,300 years respectively.

And that brings in the role of India. Post-Independent India has long been misdirected in its Israel policies by vote-bank politics. Thus, it supported the so-called Palestinian cause which has always stood against India and Hindus. Now, India should free herself of the vote-bank politics and myopic vision. Recognising Jerusalem as the capital of Israel is a civilisational duty of India.

Let two ancient spiritual nations and modern nation-states reinforce in all humanity that spiritual streams of varied nature add vitality to our planet and we can all live with the goodwill and mutual respect in this pale blue dot of ours.