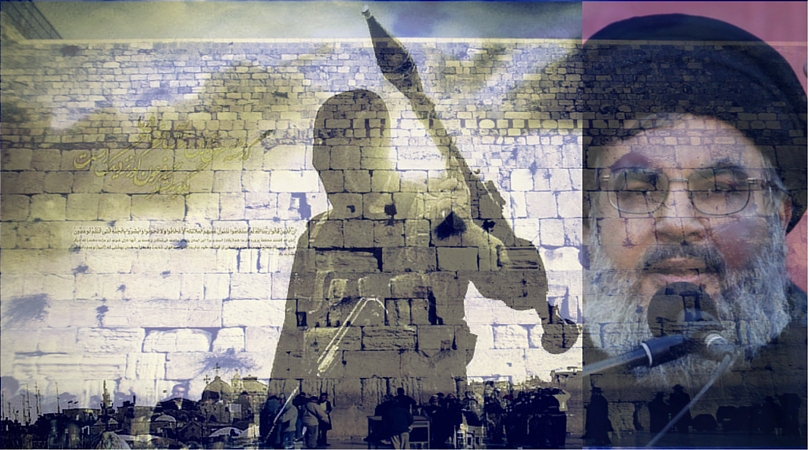 As I sit here writing this article a monster is being let out of the cage.  All the talk of “peace in our time” too as well as changing strategic partnerships are just euphemisms for politicians who have given the regime in Iran what it needs to go from being an uninfluential terrorist sponsoring state to already on its way to becoming a regional superpower.

Already an emboldened Iran is forcing the hand of the Gulf States to decide between Saudi Arabia and themselves.  It has made it clear that it will pour tons of money that is being unlocked as part of the agreement into its army and terrorist entities.

The idea that Iran needs a nuclear weapon to wipe out Israel is a farce. It does not need nukes nor an ICBM for that.  These are things it needs to attack Europe and America. This what made the Iran Nuclear Deal so ridiculous.  It’s as if the Western powers really believed that Iran just wanted to kill Jews, something none of them really took issue with.

Nasrallah is Coming for Jerusalem

Iran’s main weapon against Israel is Hezbollah.  With Hezbollah’s hundreds of thousands of missiles covering most of Israel, Iran does not need a nuke to knock out Israel’s vital locations. Add to that Russia’s coverage of the Levant under the S-400 system, which makes a surprise attack by Israel against Hezbollah installations daunting to say the least. Hezbollah has also been receiving Russian weapons in its fight against the Syrian rebels.

With Nasrallah to Israel’s North, it is no wonder Bibi is trying his best to be on good terms with Putin.  Ultimately speaking, the USA and Europe have little or no leverage on Iran, but Russia is different and so Bibi’s strategy is to woo the newest Tsar and hope that in time another solution arises.

Now that the nuclear deal is a done and money is flowing into Iran, the stakes in the Middle East have risen.  Iran’s regime is revolutionary in nature.  Revolutionaries do not rest until the revolution is complete. For Iran it is simple. When the Mahdi comes the Revolution is done.  For Iran, their first target is Saudi Arabia and the next is Europe and the USA.  Israel, is of course a target, but one that Iran believes will and can be taken care of fairly easily.

The Mahdi or the hidden Imam will only come when the world reaches a state of chaos. The Western governments and Russia have seen no harm in enabling one of the most dangerous regimes in the History of the World. Of course their rationale seems unchanged from their counterparts over 70 years ago in relation to Hitler.  Then Hitler was “only” after the Jews.  Chamberlain and company saw no problem with letting a bunch of unwanted Jews die to avert war.  Well, war came anyway and with it, the near destruction of the world.

This time, the global elite have made a similar judgement. War is not far off, it is moments away.

Iran Can be Stopped

The irony of Iran’s re entry into global markets is that crude oil prices stand between 29 to 31 dollars per barrel. That is far lower than needed to sustain the Iranian economy. With their oil back into global circulation the price will plummet further.  This means the Ayatollahs cannot wait to pounce on their neighbors, but must move quickly before their economy implodes completely.

This makes Iran extremely dangerous in the short term with the potential for sparking global conflict by attacking Saudi Arabia and Israel. Furthermore by forcing both the USA’s hand as well as Russia’s conflict is in the offing.

If Iran balks in the coming weeks, their economic turmoil will increase.  At that point the regime will be in danger. Essentially, Iran can be stopped by the regime itself.

Despite neoconservative warmongering against Iran and their client regime in Syria, the best choice of action at this point is to find a way to keep forcing the price of oil lower until Iran either makes a faulty step forward or waits too long to jump. Militarily speaking Israel and those seeking to defend the World from the Mullahs must be ready to fight when Iran attacks which will come sooner than expected.  The rest will be up to the Almighty.