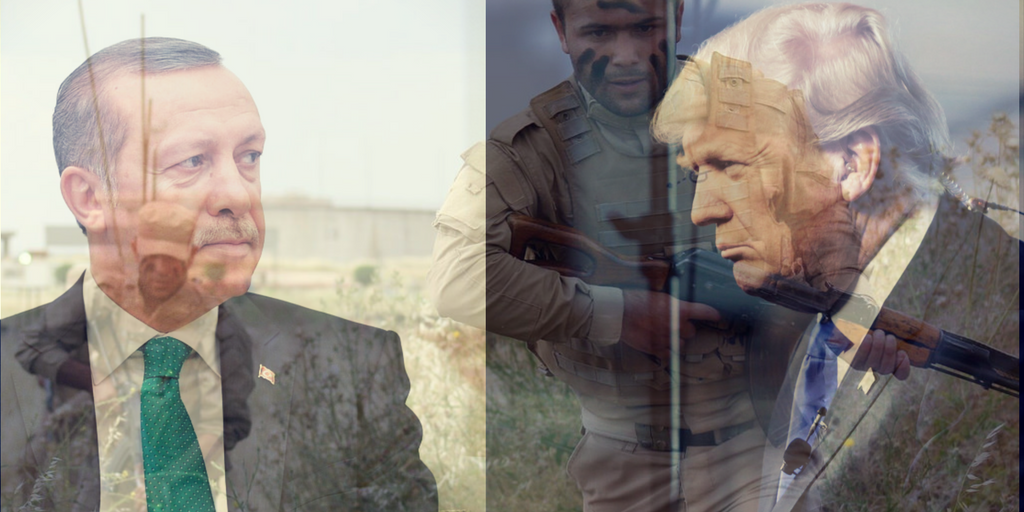 The publication by Turkey of more than 200 US bases and places of presence across Western Kurdistan, now occupied by Syria drew the ire of the Trump administration and the US Defense establishment. The Turkish government went ahead and published this list and map in protest of the US policy in supporting the growing autonomy of Western Kurdistan (Northern Syria), which runs along the border of Turkey in Northern Syria.

“The discussion of specific troop numbers and locations would provide sensitive tactical information to the enemy which could endanger Coalition and partner forces,” wrote Col. Joe Scrocca, coalition director of public affairs.

“Publishing this type of information would be professionally irresponsible and we respectively [sic] request that you refrain from disseminating any information that would put Coalition lives in jeopardy.”

Turkey views the rise of an independent Kurdistan as a non-starter, unless it is contained to the KRG in Northern Iraq.  What is taking shape now though are two autnomous areas, which if joined would inspire Kurds living in Northern Kurdistan, occupied today by Turkey, to fight vigorously for their independence.

It is no secret that the US has ben aiding the YPG (Syrian Kurdish militias) and has rolled them into the broader Syrian Democratic Forces (SDF), but the continued strengthening of this militia has crossed a red line for Erdogan.

Did Trump trade the Southwest of Syria for Western Kurdistan?

Despite the current opposition from Washington to the KRG’s drive towards a referendum on independence, the Trump administration still views the Kurds as the best avenue to push back on Iran and stablize the region. There is a four way tussle for Syria: Russia, Iran, Turkey, and the USA. Some of the sides work together and others don’t, but these four countries are busy establishing zones of control.

Up until the G-20 Ceasefire with Russia, it appeared that the USA and Russia were heading to a direct confrontation in the Southwestern part of Syria.  To offset this, the Russians backed Turkey’s assault on the indigenous Kurds to the North.  Putin hates Erdogan, but was ready to use him to battle Washington. The ceasefire changes things. With relative quiet in the Southwest, Putin can put the brakes on supporting Turkey’s assault against the Kurdish directed SDF.

Trump’s strategy here is clear. Consolodate the US gains in Western Kurdistan (Northern Syria), while letting Israel and Russia learn to work together in the Southwest. Trump now has a fighting force in Syria that is not only moderate, but is experienced in pushing back against ISIS and other Sunni radicals. More than that he pins Erdogan down, preventing the neo-Sultan from implementing his goals of expanding Turkey.

This strategy seems to benefit the US, but has been seen as dangerous by Israel due to the partnership between Russia and Iran. Given the propensity for Iran to utilize the Russian army as cover to move in on Israel, the tacit agreement with Russia is dangerous. Iran has already moved into the DMZ East of Israel’s Golan. With Hezbollah contantly infiltrating the Har Dov area in the Northern Golan, a similar presence to the East under the protection of Russian troops appears too much Israel to put up with.

With Hezbollah preparing for war, Israel is fast working to establish a deconfliction policy with Russia in the greater Golan area.