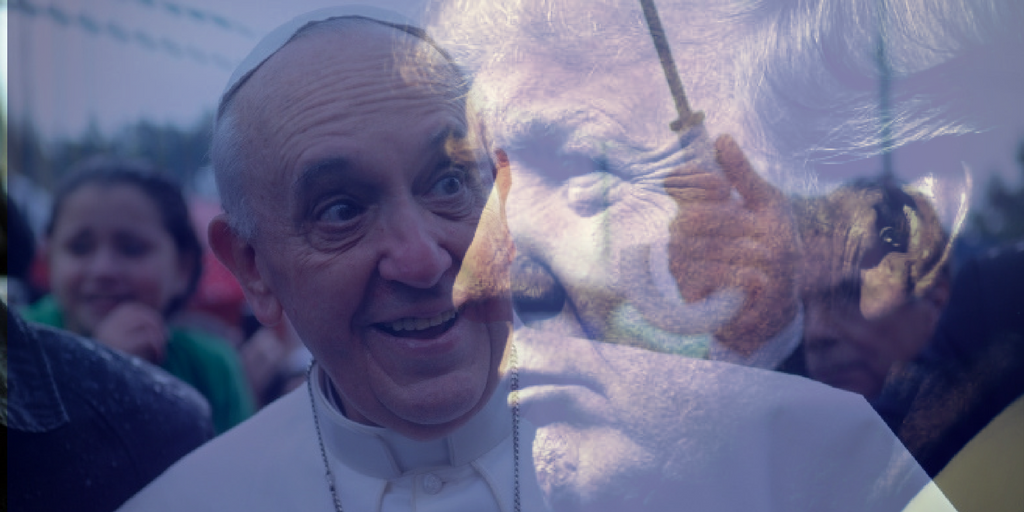 “You knooow…C’mon Who do you think is out of touch?” – Barack Obama, commenting derisively on Hillary Clinton, 2008

“Hillary Clinton, she’ll say anything and change nothing” – I am Barack Obama…and I approve this message – From a 2008 Obama election campaign ad.

“The fate of the republic rests on your shoulders. The fate of the world is teetering and you…are going to have to make sure that we push it in the right direction.”  Barack Obama, urging voters to support Hillary Clinton, November 3, 2016

It would, indeed, be in no way an exaggeration to describe next week’s US elections as perhaps the most significant in recent history, a real “fork in the road” for the future of the over 200-hundred year Union.

This Union proved to be a remarkable socio-political creation. Largely because of its founding values, as articulated in its founding documents and later amendment’s, it developed into the most influential, prosperous powerful country on the planet.

Indeed, in great measure, by holding fast to those values, it managed to maintain its position of primacy since the early decades of the last century.

But in the last decade this began to change perceptibly. Adherence to the underlying fundamentals–its Anglo-Saxon cultural roots and its Judeo-Christian (indeed Judeo-Protestant) ethical foundations—has begun to wane. Identification with, and belief in, what made America, America began to erode and fray—and with it, the coherence of the identity that made it exceptional.

Clearly, it was not America’s natural resources and mineral wealth that generated its unparalleled success. After all, numerous other countries have been endowed by nature with vast riches but none of them were able to harness the enormous creativity and productive energy of their population on a similar scale/intensity as America did.

What set America apart was the manner in which it managed to mobilize its human resources and facilitate opportunity for talent, ingenuity and industry to flower.

Clearly then, as America of today diverges increasingly from identification with those principles and civilizational foundations, and the spirit that they were imbued with, it will increasingly jeopardize the key to its own exceptionalism—and the exceptional achievement that accompanied it.

Diversity is strength, but diffusion is weakness

Of course I can already hear the howls of outraged indignation that this kind of talk borders on bigotry, and reflects gross ignorance as to sources of American strength and success. They will, no doubt, point to the enormous contributions made by immigrants, who hailed from civilizational backgrounds far removed from any traces of Judeo-Protestant influence—from East Asia to Latin America. They will of course recite the worn-out mantra that “diversity is strength” and underscore how Americans of Buddhist, Hindu, Catholic and other origins have all been part of the American success story.

This is all entirely true—and equally irrelevant to the point being made. For it was only in the environment created by the unique societal foundations of America, and the opportunities it afforded, that allowed the immigrants, drawn to its shores from other socio-cultural settings, to blossom. After all, if this was not the case, why would they leave their countries of origin?

So, as long as these foundations remained the dominant determinant of societal realities in America, the country could continue to absorb productive forces from other societal backgrounds, without jeopardizing the sustainability of its past success.

This, however, is not the case when large bodies of immigrants flow into the country and wish to establish communities which retain—indeed, actively sustain—much of what they left behind in their countries of origin, and which, presumably, comprised much of the motivation for them to leave. It is then that dynamic diversity begins its decline into dysfunctional diffusion.

To illustrate the point somewhat simplistically: It is one thing if a Mexican immigrant arrives in the US, integrates into American society and becomes a productive American. It is quite another, if waves of Mexican immigrants arrive in America and transform significant parts of it into Mexico.

Thus, when immigrants from diverse socio-ethnic backgrounds blend into the dominant culture, the result might well be a synergetic outcome beneficial to both. But this is unlikely when largely discordant immigrant cultures begin to impose themselves on the dominant host culture, which begins to forego important parts of its identity for fear of “offending” new comers, who were attracted to it precisely because of what that dominant culture offered them.

Accordingly, while tolerance of diverse minorities is clearly enlightened self-interest, self-abnegation to accommodate discordant minority predilections is, no less clearly, a detrimental denial of self-worth. What has all this to do with the upcoming elections on Tuesday?

Well, a great deal! Indeed, in many ways it lies at the heart of the decision for whom to cast one’s ballot. It not only separates out sharply between the two candidates’ declared platforms and campaign pronouncements, but more profoundly–-far more profoundly—it separates out between their prospective constituencies and the long-term vested interests of the respective political Establishments that support them.

Real “fork in the road”

Accordingly, one does not require advanced degrees in political science to grasp just how the relevant political landscape lies as the crucial ballot approaches.

It is beyond dispute that, because of the demographic composition of its support base, any Democratic Party candidate, Hillary Clinton included, will be exceedingly loath to curtail significant influxes of largely unregulated and un-vetted immigrants from the Mid-East, Latin America and elsewhere. For this reluctance will clearly find favor with many of her current constituents and prospective new ones – particularly in light of the astounding electoral practice in the US which requires no photo ID to allow one to choose who will have access to the nation’s nuclear codes—while such identification is obligatory for a myriad of other far less significant purposes.

By contrast, whether or not one lends credence to Donald Trump’s strident declarations on severe restrictions he plans to impose on immigration across the county’s southern border and from Muslim countries, it is clearly very much in his political interest to act along such lines—since this will deny his adversaries the potential expansion of their political base.

So those, then, are the real stakes in these elections – the real “fork in the road”: A choice between a candidate, whose vested political interests induce her to permit changes that will permanently alter the character and composition of America, or one whose political interests compel him to resist this.

The elections as “damage control”

In many ways—most of them, regrettable—these are elections that are significantly different from virtually all previous ones.

Accordingly, far more than a choice of whom to vote for, these elections will be dominantly a choice of whom not to vote for. They will be far less a process that determines whom the voters want to ensconce in the White House, and far more about whom they want prevented from being ensconced in it.

Thus, rather than what they hope their preferred candidate can do for the country, their ballot will be determined by what they fear the other candidate will do to the country.

In this sense, these elections are largely an exercise in damage control.

Or at least that is what it should be: A choice, foisted on a largely dismayed electorate, to install the candidate least likely to be able to inflict irreparable damage on the Republic, until American democracy can somehow recover and offer the voter a more appealing selection of candidates in the future.

In this respect, the choice ought to be relatively simple. For regardless of what one might believe as to what either candidate has in his/ her heart, it is clearly Trump who has a greater interest in keeping America American; while Clinton has a vested interest in endorsing the burgeoning inflow of immigrants, who, rather than embrace the founding values of America, are liable to exploit them to change the face of US society beyond recognition.

Indeed, one should be bear in mind that there is nothing “universal” about the noble values on which America was founded and evolved. Quite the opposite. After all, the spirit of liberty and tolerance they reflect are not the hallmarks of many—perhaps even most—of the countries around the globe. So, unless these values are diligently preserved, they could well be mortally undermined. It is difficult to think of anything that could undermine the values of a society more fundamentally than the massive influx of largely unregulated un-vetted newcomers, for whom those values are not only foreign, but often antithetical, to those of the countries of origin—something countries like Sweden and Germany have sadly discovered to their great detriment.

But that, of course, is precisely what should be expected if Clinton wins. It would require hefty doses of unbounded, and largely unfounded, optimism to expect any outcome other than increasingly severe erosion of societal values that have defined America in the past.

But it is not only the structural bias of Clinton’s political interests that makes her potentially the more permanently damaging incumbent to the character of the American Republic, but also her ability to do so. For, as a seasoned politician, well-versed in the corridors of governmental power and machinations of the political Establishment, she has far greater capacity and reach to ensure that her ill-conceived and detrimental policies are implemented and durably entrenched, than the inexperienced maverick novice Trump. After all, he would undoubtedly require many months “learning the ropes”, before he manages to implement and entrench any allegedly injurious policies that perturb his detractors.

As I wrote in last week’s column, the 2009 Obama administration set a course for America substantially different from those set by his predecessors, and in important ways highly discordant with them. Obama’s 2012 reelection helped solidify the anomalous (the less charitable might say “perverse”) change in direction along which he took the nation.

The election next week of Clinton, who is firmly committed, indeed virtually compelled, to continue with Obama policies is more than likely to make that course irretrievable, and the US—much like several luckless EU countries—will be set on an inevitable downward spiral toward third-world status…from which a growing portion of its population hoped to extricate itself

Obama is right—but Obama is wrong

So President Obama was right when he declared at a North Carolina rally (November 3, 2016): “The fate of the republic rests on your [the voters] shoulders…The fate of the world is teetering…” For these elections will indeed have momentous consequences both for the US and across the world. He is, however entirely mistaken as to the direction in which he urges them “to make sure…we push it” (See introductory excerpt)

Sadly, however, despite the fact that these are likely to be the most consequential elections in modern history, it appears (if the conduct of the campaign is to be any guideline) that they may well be decided because of the most inconsequential reasons. For it seems, it will not be the strategic direction in which the country will be taken that will determine the outcome, but rumors and innuendo as to the character defects of Trump and his alleged crude indiscretions with women. Given the stakes, this seems almost inconceivable. Trump should be elected not because of what may occur if he is, but because of what will almost certainly occur if he is not. He should not be judged on what his incumbency might achieve, but what his incumbency must prevent.

So in weighing the grim alternatives, the US electorate would do well to bear in mind that these elections are for the Presidency not the Papacy. They must choose who is best suited (or the least unsuited) to be President – not the Pope.