While President Trump and his Administration gained a political achievement with the recognition of Jerusalem as the capital of the State of Israel, their decision will be testing many sensitivities.

A historic day that aims to bring Israel closer to a final status with the Palestinians, keep the Saudis and the wider Arab world on a track to normalization with Israel, and bring together a coalition to deter an aggressive Iranian regime.

In the Old City of Jerusalem, there is celebration and there is awareness. President Trump’s decision to recognize Jerusalem as Israel’s capital and move the American Embassy from Tel Aviv to Jerusalem is seen as an act of recognizing reality. The fear in Eastern Jerusalem is what comes next.

Until the Israeli security council decided to remove the metal detectors at the Temple Mount, Palestinian Muslims immediately protested and rioted in Eastern Jerusalem and many West Bank towns. Notably the Lion’s Gate in the Old City’s Muslim Quarter was a hotbed of riots and other drama. Not to mention the incitement stirred by the Palestinian Authority and international media organizations such as Al Jazeera, whose reporters were seemingly involved in organizing Lion’s Gate protests.

Starting earlier this week, Israeli Police in Jerusalem’s Old City have been guarding in heavier numbers. This recognition by Israel’s Authorities has brought calmness for the first day off of the United States’ historic move to recognize Jerusalem.

The Ayatollahs in Iran also see this decision as destructive. They speak publicly to taunt Israel’s emotions for a war with a strengthened Hezbollah, though they also see the future Sunni-Israeli alliance. Their next few moves will determine their long-term possibilities. Trump’s decision could bring the consequence of an intifada, but not long-scale war between Israel and Iranian proxies. Consequentially, an “intifada” brings upon the death of targeted Israeli soldiers, residents living their daily lives, and even visiting tourists. We do not forget about the deaths of terror inspired young adults from local Palestinian neighborhoods.

Enjoy this historic moment for Israel and brace for impact, Jerusalem has awoken again.

Next Post WATCH: "It is an Act of Political Bravery and Moral Courage to Move the Embassy" 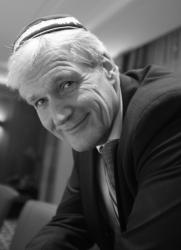 Moti Meller is an Israeli sabra, a Jerusalem native and the son of American-Israeli parents. He works as a political analyst and has a strong foothold in American and Israeli politics. As a scholar of history and a frequent world traveler, Meller is able to navigate through a challenging political climate and bring objectivity out of a politically polarized world.

Moti Meller is an Israeli sabra, a Jerusalem native and the son of American-Israeli parents. He works as a political analyst and has a strong foothold in American and Israeli politics. As a scholar of history and a frequent world traveler, Meller is able to navigate through a challenging political climate and bring objectivity out of a politically polarized world.