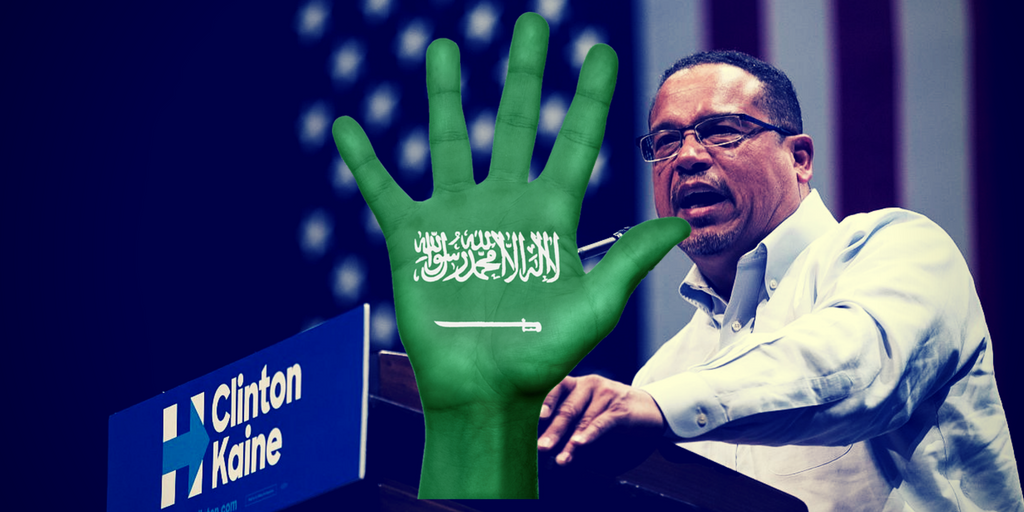 Minnesota Rep. Keith Ellison is a front-runner for chairman of the Democratic National Committee. If you are following the ongoing developments in Rep. Keith Ellison‘s bid to become the next chair of the DNC, you may be interested in some primary source information from Wikileak’s Cablegate.

… Before entering the meeting room, the U.S. delegation was greeted by the 11 Council members who participated in the main meeting. At one point during the meeting, Speaker Pelosi noted that when Congressman Ellison took the oath of office in January 2007, he did so on a Qur’an originally owned by President Jefferson. She pointed out that she told King Abdullah that Jefferson studied Arabic after he left the White House and that U.S. interest in Islam is at least 200 years old. (COMMENT: The Majlis members were visibly and audibly impressed. END COMMENT.) …

…. Shura Council representative Al-Hilwa conveyed his optimism regarding the Arab Peace Initiative, asking for USG support and initiative in pushing it forward.  He noted that the Arab Quartet (Saudi Arabia, UAE, Egypt, and Jordan) supports it and requested that the international Quartet do the same.  Al-Hilwa emphasized the necessity for Israel to accept the initiative, hoping that the U.S. Congress would press the Israelis to do so. Congressman Lantos said he was deeply impressed with the King’s proposal for a comprehensive settlement of the Arab-Israeli dispute, emphasizing his importance as a regional leader, as well as vis-a-vis the region’s religious hierarchy.  Congressman Lantos stressed that governments such as Egypt and Jordan that have relations with Israel would be useful in this process, adding that it is also important to involve United Nations Secretary General  Ban Ki-Moon because he enjoys global respect and can help move the proposal forward.  He warned that settling this dispute will not happen overnight and will require a great deal of give and take, consultation, and negotiation.

… Noting that there are a number of initiatives in Congress to address energy needs, Speaker Pelosi emphasized that for environmental, energy, economic, and security reasons, the U.S. must increase its energy independence and reduce its dependence on oil.  She pointed out that there is not an endless supply of oil and that the U.S. must prepare for the future, adding that the U.S. must also stop global warming.  However, she welcomed further discussion, saying that the issue is important to all countries.”

“… As Chair of the K.S.A.- U.S.A. Friendship Committee, Al-Aiban announced that he is developing a series of exchange visits to the U.S. Congress because there is a “need for greater contacts between Congress and the Majlis.”  He also confided that Minnesota Representative Keith Ellison, who accompanied Speaker Pelosi in April 2007, may be invited to take part in the annual Hajj.  Citing the current NOPEC legislation (ref A), Al-Aiban said it is vital to also bring “non-friends” to Saudi Arabia.  In closing, Al-Aiban shared that he and a small delegation will be traveling to the U.S. in early October to prepare logistics for the planned visit of Majlis President Sheikh Dr. Salih bin Humaid in late 2007. Referring to House of Representatives Speaker Nancy Pelosi’s verbal invitation in April 2007 (ref B) for Humaid to visit Congress, Al-Aiban requested official invitations from Speaker Pelosi and Senate Majority Leader Harry Reid in order to follow up on that invitation.”

… Representative Tierney asked whether the new government would give the international community access to A.Q. Khan, the mastermind behind Pakistan’s nuclear
capability development.  Iqbal quickly pointed out that no political party within Pakistan would ‘give him over.’ However, both the PML-N and the PPP are committed to nuclear non-proliferation.  In addition, during his term as Prime Minister, Nawaz Sharif rejected the idea of selling the nuclear technology capabilities to other countries, as he was pressured to do.  Iqbal was quick to note that had the world’s super powers created a legitimate means of nuclear technology transfer, Pakistan would not have had to create their program using back channels.  Iqbal believed that Pakistan was willing to work with the US on creating such a legitimate system of technology transfer for other interested countries.”

… On the margins of the Forum, Ellison appeared on Al Jazeera’s Arabic channel as the “mid-day guest,” and was also interviewed by Turkish national television and Egypt’s Al Hayat TV … Ellison also granted an interview to Qatari Arabic daily ‘Al Watan’ …

… Ellison spoke to the dean, faculty and students at Qatar University’s Sharia College and responded to questions about religious freedom and the lives of ordinary Muslims in the United States.  The Congressman also spoke to a gathering of young Qatari men organized by the General Youth Authority.”

“… During a February 17-18 visit to Amman, Congressmen Brian Baird and Keith Ellison (both members of the Friends of Jordan Caucus) took the pulse of Jordanian feelings on Gaza …

… During a reception hosted by UNRWA Commissioner-General Karen Abu Zayd, Baird and Ellison announced their intention to ‘bear witness’ to the impact of Israel’s operations in Gaza by traveling there.

… During a phone call with Prince Ghazi, the King’s primary advisor on religious issues, Baird and Ellison spoke about possibilities for advancing interfaith dialogue under the “Common Word” initiative, which identifies commonalities in the Muslim and Christian scriptures.  Ghazi flagged an upcoming Georgetown University conference on the subject and urged the Codel to write a letter to President Obama, asking  him to attend.  Ghazi also outlined his attempts to formulate a UN resolution declaring a World Interfaith Week — a cause he hopes to formally launch at the Georgetown conference. Ghazi plans to accompany the King on a sought-after visit to meet President Obama and hopes to lobby for the President to attend the conference on the side.

… Baird voiced concerns that Judaism was not a part of the Common Word initiative, adding that the cause would be stronger if the common beliefs of three rather than two religions were included.  Ghazi responded that Judaism was left out of Common Word due to political sensitivities among Muslims, saying, ‘It’s a tough sell on my side.’”

In 2009, the U.S. House ethics panel completed an investigation of Minnesota Rep. Keith Ellison, a front-runner for chairman of the Democratic National Committee, “after he failed to disclose that a group founded by members of the Muslim Brotherhood paid for him to make a pilgrimage to the Islamic holy site of Mecca in Saudi Arabia.”

“After a months-long review by a U.S. House ethics panel, Rep. Keith Ellison, D-Minn., has disclosed the amount of his privately-paid trip to Mecca in December.

The trip, paid for by the Muslim American Society of Minnesota, cost $13,350, Ellison said Thursday.

The two-week trip to Saudi Arabia, which Ellison described as a personal religious pilgrimage, or Hajj, prompted little discussion until June when Ellison filed financial travel reports that failed to disclose the amount the Muslim group had paid for his travel.

In releasing the amount on Thursday, Ellison held to his previous assertion that he was following the instructions of the House Committee on Standards of Official Conduct, commonly known as the ethics committee.

‘I never had a moral objection to giving the number out,’ said Ellison, the first Muslim elected to Congress. ‘But the rules said I didn’t have to, so I didn’t. Now I am.’”

However, it is unclear whether the U.S. House ethics panel during their review was privy to information contained in an August 8, 2007 diplomatic cable which mentions — within the context of discussion of plans for relationship-building between Majlis Al-Shura and U.S. Congress — the intention of Majlis Al-Shura member Dr. Bandar bin Mohammed Al-Aiban in speaking to Political Counsel to extend an invitation to the annual Hajj to Representative Ellison — and if they also reviewed related information in other cables:

** Note: internal links in the following added by this author for terminology and source references/context

“As Chair of the K.S.A.– U.S.A. Friendship Committee, Al-Aiban announced that he is developing a series of exchange visits to the U.S. Congress because there is a ‘need for greater contacts between Congress and the Majlis.’  He also confided that Minnesota Representative Keith Ellison, who accompanied Speaker Pelosi in April 2007, may be invited to take part in the annual Hajj.  Citing the current NOPEC legislation (ref A), Al-Aiban said it is vital to also bring ‘non-friends’ to Saudi Arabia.  In closing, Al-Aiban shared that he and a small delegation will be traveling to the U.S. in early October to prepare logistics for the planned visit of Majlis President Sheikh Dr. Salih bin Humaid in late 2007. Referring to House of Representatives Speaker Nancy Pelosi’s verbal invitation in April 2007 (ref B) for Humaid to visit Congress, Al-Aiban requested official invitations from Speaker Pelosi and Senate Majority Leader Harry Reid in order to follow up on that invitation.”

If the House ethics panel did not, in fact, have this information for context during their review, it is this author’s opinion that members of the panel should reopen the investigation to ensure that all relevant background information is considered.  It appears that the House ethics panel’s initial review was focused on whether the Rep. Ellison’s travel expenses were reported according to procedure insofar as the nature of private or public business conducted during the trip. In light of all of the background context revealed in the diplomatic cables, especially the information regarding Al-Aiban’s statement that revealed it was Majlis Al-Shura’s intention to bring Rep. Ellison over for Hajj, there are other questions that arise as to procedure — for instance, about the source of the funding for the travel and whether it was channeled or arranged by a foreign government.