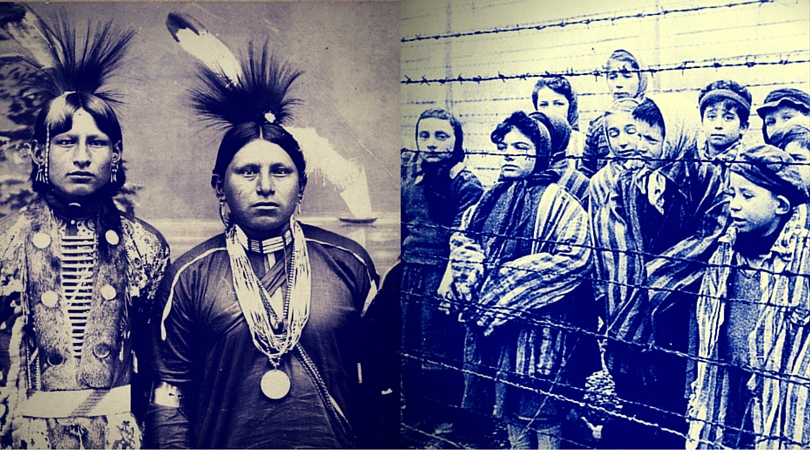 As a child I watched hundreds of Westerns and played hours upon hours of Cowboys and Indians. I was born in the United States and marveled at the exploits of both sides, courageous, tragic, emboldened, displaying all the pathos of the American experience. At that tender young age, I really had no idea that I was playing out in full regalia, cowboy hats on the one day and bows and arrows on the other, the genocide of Native Americans. As a Jew, having imbibed the Holocaust from birth, it is clear that I should have been far more sensitive. But it was all so innocent for the non-Native American youth of America – Hollywood had done its part, as had James Fennimore Cooper, Buffalo Bill and a host of others.

Not only was I unaware of the degree of slaughter of American Indians, but I further had no idea that one of the greatest admirers of the American Cowboy was an Austrian-German by the name of Adolf Hitler. In fact, Hitler was not only an admirer of the Cowboy, he was a consummate student of the genocide of Native Americans.  Adolf Hitler would draw on the lessons learned in America to design the trains and the concentration camps that would lead to the butcher of millions of Jews as well as homosexuals, gypsies and other undesirables of the nascent Nazi Empire.

In an eye-opening article by Lia Mandelbaum, entitled Hitler’s Inspiration and Guide: The Native American Holocaust, the encouragement for the expediency of Hitler’s Final Solution is outlined in frightening detail. The article concentrates on both the 1864 relocation of the Navajos and the Mescalero Apaches in a camp called Bosque Redondo, a isolated and forsaken patch of New Mexico territory. During the 300 mile walk, hundreds died and thousands more found their demise in the camp itself – men, women and children.

This story is recounted in the 1985 documentary, Broken Rainbow. It is also told that Adolf Hitler studied the plans of the Bosque Redondo  in order to design the Nazi concentration camps. According to historian John Toland, Hitler praised the extermination of the “red savages” by the means of starvation and uneven combat. Toland further explains that “Hitler’s concept of concentration camps as well as the practicality of genocide owed much, so he claimed, to his studies of United States history.”

Indeed, Mandelbaum writes that Hitler had first considered marching the Jews off to a large reservation near Lubin where they would be left to their own, to die of starvation and disease, a model he had learned from the Native American genocide.

Hitler was not the only rabid anti-Semite to usurp the narrative of the Native Americans for the purpose of destroying the Jewish people; in a twist, the return of the people of Israel to their ancestral homeland has enraged Muslims throughout the better part of one hundred years.

Deploying historical fabrication and an total distortion of this return has been the chief propaganda tool of Arab leaders throughout the Middle East, and specifically has become the official party line of the Palestinian attempt to eradicate the modern State of Israel.

As such, they have tried to appropriate the tragic extermination of Native Americans as representative of their own state of affairs. The facts simply do not matter when the extermination of the Jews is the goal. Palestinians enjoy a greater overall standard of living than the rest of the Arab Middle East and their numbers in Israel have increased from the low hundreds of thousands to millions since the Zionist enterprise achieved Jewish statehood. The suggestion that they are victims of ethnic cleansing as were American Indians offers a powerful soundbyte and, indeed, has been  accepted by some Native Americans themselves.

In a most telling statement, Abraham quotes Ryan Bellrose, a member of the Metis nation: “Our population of over 65 million was violently reduced to a mere 10 million, a slaughter unprecedented in human history. To compare that in whatever way to the Palestinians’ story is deeply offensive to me.…… they were repeatedly given the opportunity to build their state …….. and to partner with the Jews — and they persistently refused peace overtures and chose war. We were never given that chance. We never made that choice.”

There is no doubt that the genocide – the holocaust – of Native Americans has been used for evil purposes by those that would rewrite history and attempt now to destroy the Jewish people. There is also no doubt that the Jews, Israel and the Native Americans, many of which may actually have Jewish ancestral blood running in their veins, will stand together.  With courage and deep mutual understanding, two proud peoples that have survived the worst know that suffering can only build bonds between nations that must endure,  for the betterment of mankind.