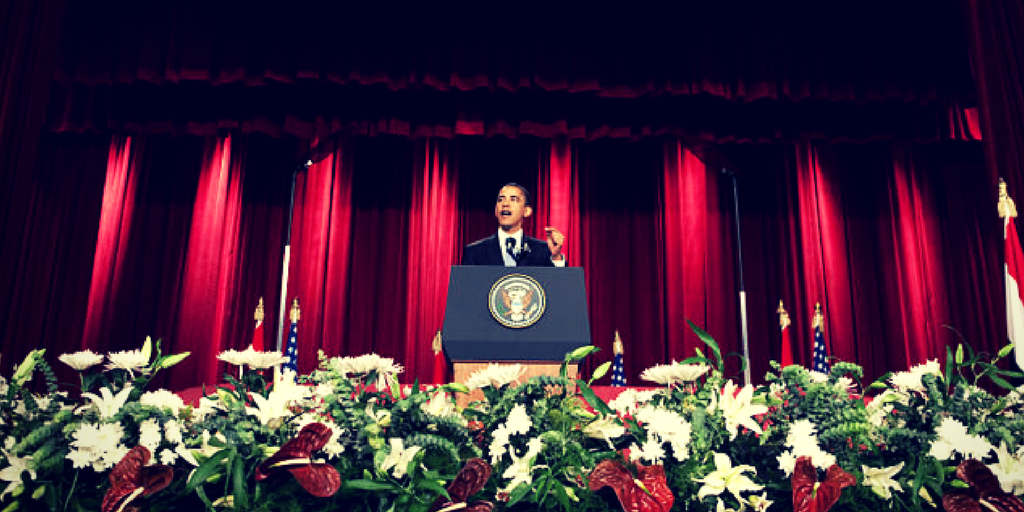 President Barack Obama promised that his would be the most transparent administration in US history. And the truth is, it was. At least in relation to his policies toward the Muslim world, Obama told us precisely what he intended to do and then he did it.

A mere week remains of Obama’s tenure in office. But Obama remains intent on carrying on as if he will never leave power. He has pledged to continue to implement his goals for the next week and then to serve as the most outspoken ex-president in US history.

In all of Obama’s recent appearances, his message is one of vindication. I came. I succeeded. I will continue to succeed. I represent the good people, the people of tomorrow. My opponents represent the Manichean, backward past. We will fight them forever and we will prevail.

Tuesday Obama gave his final interview to the Israeli media to Ilana Dayan from Channel 2’s Uvda news magazine. Dayan usually tries to come off as an intellectual. On Tuesday’s show, she cast aside professionalism however, and succumbed to her inner teenybopper. Among her other questions, she asked Obama the secret to his preternatural ability to touch people’s souls.

The only significant exchange in their conversation came when Dayan asked Obama about the speech he gave on June 4, 2009, in Cairo. Does he still stand by all the things he said in that speech? Would he give that speech again today, given all that has since happened in the region, she asked.

The speech, he insisted was “aspirational” rather than programmatic. And the aspirations that he expressed in that address were correct.

If Dayan had been able to put aside her hero worship for a moment, she would have stopped Obama right then and there. His claim was preposterous.

But, given her decision to expose herself as a slobbering groupie, Dayan let it slide.

To salvage the good name of the journalism, and more important, to understand Obama’s actual record and its consequences, it is critical however to return to that speech.

Obama’s speech at Cairo University was the most important speech of his presidency. In it he laid out both his “aspirational” vision of relations between the West and the Islamic world and his plans for implementing his vision. The fundamentally transformed world he will leave President-elect Donald Trump to contend with next Friday was transformed on the basis of that speech.

Obama’s address that day at Cairo University lasted for nearly an hour. In the first half he set out his framework for understanding the nature of the US’s relations with the Muslim world and the relationship between the Western world and Islam more generally. He also expressed his vision for how that relationship should change.

The US-led West he explained had sinned against the Muslim world through colonialism and racism.

It needed to make amends for its past and make Muslims feel comfortable and respected, particularly female Muslims, covered from head to toe.

As for the Muslims, well, September 11 was wrong but didn’t reflect the truth of Islam, which is extraordinary. Obama thrice praised “the Holy Koran.” He quoted it admiringly. He waxed poetic in his appreciation for all the great contributions Islamic civilization has made to the world – he even made up a few. And he insisted falsely that Islam has always been a significant part of the American experience.

In his dichotomy between two human paths – the West’s and Islam’s – although he faulted the records of both, Obama judged the US and the West more harshly than Islam.

In the second half of his address, Obama detailed his plans for changing the West’s relations with Islam in a manner that reflected the true natures of both.

In hindsight, it is clear that during the seven and a half years of his presidency that followed that speech, all of Obama’s actions involved implementing the policy blueprint he laid out in Cairo.

He never deviated from the course he spelled out.

Obama promised to withdraw US forces from Iraq regardless of the consequences. And he did.

He promised he would keep US forces in Afghanistan but gave them no clear mission other than being nice to everyone and giving Afghans a lot of money. And those have been his orders ever since.

Then he turned his attention to Israel and the Palestinians. Obama opened this section by presenting his ideological framework for understanding the conflict. Israel he insisted was not established out of respect of the Jews’ national rights to their historic homeland. It was established as a consolation prize to the Jews after the Holocaust.

That is, Israel is a product of European colonialism, just as Iran and Hamas claim.

In contrast, the Palestinians are the indigenous people of the land. They have been the primary victims of the colonial West’s post-Holocaust guilty conscience. Their suffering is real and legitimate.

Hamas’s opposition to Israel is legitimate, he indicated. Through omission, Obama made clear that he has no ideological problem with Hamas – only with its chosen means of achieving its goal.

Rather than fire missiles at Israel, he said, Hamas should learn from its fellow victims of white European colonialist racists in South Africa, in India, and among the African-American community.

Like them Hamas should use nonviolent means to achieve its just aims.

Obama’s decision attack Israel at the UN Security Council last month, his attempts to force Israel to accept Hamas’s cease-fire demands during Operation Protective Edge in 2014, his consistent demand that Israel renounce Jewish civil and property rights in united Jerusalem, in Judea and Samaria, his current refusal to rule out the possibility of enabling another anti-Israel resolution to pass at the Security Council next week, and his contempt for the Israeli Right all are explained, envisioned and justified explicitly or implicitly in his Cairo speech.

One of the more notable but less discussed aspects of Obama’s assertion that the Palestinians are in the right and Israel is in the wrong in the speech, was his embrace of Hamas. Obama made no mention of the PLO or the Palestinian Authority or Fatah in his speech. He mentioned only Hamas – the Palestinian branch of the Muslim Brotherhood, which shares the Brotherhood’s commitment to annihilating Israel and wiping out the Jewish people worldwide.

Sitting in the audience that day in Cairo were members of Egypt’s Muslim Brotherhood.

Then-Egyptian president Hosni Mubarak rightly viewed Obama’s insistence that the brothers be invited to his address as a hostile act. Due to this assessment, Mubarak boycotted the speech and refused to greet Obama at the Cairo airport.

Two years later, Obama supported Mubarak’s overthrow and the rise of the Muslim Brotherhood to replace him.

Back to the speech.

Having embraced the Muslim Brotherhood and its Palestinian branch, branded Israel a colonial implant and discredited the US’s moral claim to world leadership, Obama turned his attention to Iran.

Obama made clear that his intention as president was to appease the ayatollahs. America he explained had earned their hatred because in 1953 the CIA overthrew the pro-Soviet regime in Iran and installed the pro-American shah in its place.

True, since then the Iranians have done all sorts of mean things to America. But America’s original sin of intervening in 1953 justified Iran’s aggression.

Obama indicated that he intended to appease Iran by enabling its illicit nuclear program to progress.

Ignoring the fact that Iran’s illegal nuclear program placed it in material breach of the Nuclear Non-Proliferation Treaty, Obama argued that as an NPT signatory, Iran had a right to a peaceful nuclear program. As for the US and the rest of the members of the nuclear club, Obama intended to convince everyone to destroy their nuclear arsenals.

And in the succeeding years, he took a hacksaw to America’s nuclear force.

After Obama’s speech in Cairo, no one had any cause for surprise at the reports this week that he approved the transfer of 116 tons of uranium to Iran. Likewise, no one should have been surprised by his nuclear deal or by his willingness to see Iran take over Iraq, Syria, Lebanon and Yemen. No one should be surprised by his cash payoffs to the regime or his passivity in the face of repeated Iranian acts of aggression against US naval vessels in the Strait of Hormuz.

Everything that Obama has done since he gave that speech was alluded to or spelled out that day.

Certainly, nothing he has done was inconsistent with what he said.

The consequences of Obama’s worldview and the policies he laid out in Cairo have been an unmitigated disaster for everyone. The Islamic world is in turmoil. The rising forces are those that Obama favored that day: The jihadists.

ISIS, which Obama allowed to develop and grow, has become the ideological guide not only of jihadists in the Middle East but of Muslims in the West as well. Consequently it has destabilized not only Iraq and Syria but Europe as well. As the victims of the Islamist massacres in San Bernardino, Boston, Ft. Hood, Orlando and beyond can attest, American citizens are also paying the price for Obama’s program.

Thanks to Obama, the Iranian regime survived the Green Revolution. Due to his policies, Iran is both the master of its nuclear fate and the rising regional hegemon.

Together with its Russian partners, whose return to regional power after a 30-year absence Obama enabled, Iran has overseen the ethnic cleansing and genocide of Sunnis in Syria and paved the way for the refugee crisis that threatens the future of the European Union.

Now he is poised to leave NATO in favor of an alliance with Russia.

Obama and his followers see none of this. Faithful only to their ideology, Obama and his followers in the US and around the world refuse to see the connection between the policies borne of that ideology and their destructive consequences. They refuse to recognize that the hatred for Western civilization and in particular of the Jewish state Obama gave voice to in Cairo, and his parallel expression of admiration for radical Islamic enemies of the West, have had and will continue to have horrific consequences for the US and for the world as a whole.

Cairo is Obama’s legacy. His followers’ refusal to acknowledge this truth means that it falls to those Obama reviles to recognize the wages of the most transparent presidency in history. It is their responsibility to undo the ideological and concrete damage to humanity the program he first unveiled in that address and assiduously implemented ever since has wrought.