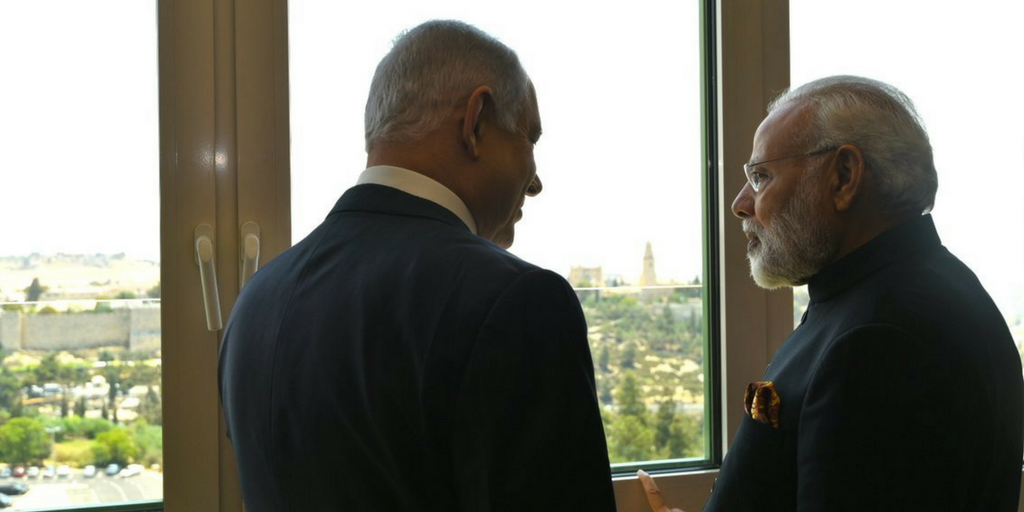 We are living in amazing times. History will show that this three-day visit by Neandra Modi to Israel was a moment in world history when two of the most ancient cultures decided to leave the prism of their past behind and work together in order to build a strategic partnership that would not only benefit one another, but the world.

Israel and India are thousands of years old.  Judaism and Hinduism are the two most ancient spiritual paths in the world. It is under this backdrop and the geopolitical turmoil in which we see the old power structure of the west and its colonial and neo-colonial influences collapse that these two countries have begun to rise.

Modi’s visit comes after more than a decade worth of growing ties between the two countries.  These political ties are built on the back of thousands of years of personal relationships between Jews and Hindus.  These relationships were built on respect of one another.  Jews have been living in India for more than 2000 years and during that time no tinge of anti-Semitism was expressed.

In a world that has seen the rise of Islamic fundamentalism and the weakening of the post cold-war order these cultural ties have grown far more overt as more and more Israelis have spent time in India backpacking and taking a breather after the army.  Indians have taken the opportunity to visit the only Jewish State, to learn and admire another ancient culture.

Technology Partnership Built by the People

Israel, being the technology powerhouse it is has built many of its tech partnerships with other countries through government introduction.  With India it has been built by the people itself. Indian programmers have become the go to source for Israeli teams for the last decade.  Both groups have worked together on virtual teams and learned how to achieve success an ocean away.

It is no accident that as Prime Netanyahu said, “The two most spoken languages in Silicon Valley are Hebrew and Hindi.”

During Modi’s visit to Israel and after several closed-door sessions that lasted four hours each, the two countries elevated their relationship to a Strategic Partnership and signed seven MOU’s.  Beyond these developments as well as the announcement of a direct flight between Tel Aviv and Mombai/New Dehli, the partnership erases the false narrative of “Palestinian” indignity and rightful rebellion against the “Jewish Occupier.”

India has always been admired by third world countries in Africa and the Middle East as the leader against the International European colonial regime.  The Jewish State was seen as part of this unwanted colonial regime. With the growing ties and Modi’s about-face on Israel’s place within the broader neo-colonialist dynamic it is the Palestinians who have been exposed as the European tool to divide and conquer the Levant.  Afterall, the Palestinians are supported and funded by the EU.  It is also the Europeans who have bolstered Islamic regimes and totalitarian governments, which have burned a path through indigenous communities from Africa to the MIddle East, to the Indian Sub-Continent.

For Indians, who have known for decades if not more, that the mentality of Jihad is just another form of colonialist aspirations, the Modi visit is only natural in exposing the lie of Islamic indigineity in Africa, Israel, and India.

It is no accident that India and Israel’s embrace of one another has come after tens of Sub-Sahara African countries have turned to Israel as a partner and friend. India’s partnership is an erasure and exposure of European implanted lies within the context of their own need to exploit and expand using the land of ancient cultures in Africa, the Middle East, and India.  The Europeans did this by unleashing the Islamic hordes within the wider Arab world through turning one against another and finally setting them upon non-Islamic Africans, Jews, Druze, Arameans, Kurds, Indians, native Pashtun in Afghanistan, and more.

Modi’s visit is about the future and it is about rectifying a narrative that was injected by a self-serving Europe who sought to twist history for its own purposes.

In three days, India and Israel have found themselves again.  They have taken a path away from their former colonial masters who wanted only to divide the two in order to conquer. This partnership will be built on true friendship and goodwill.

To see a touch of just how genuine this is, Netanyahu and Modi met Moshe Holtzberg – an Israeli child who as a toddler survived the 2008 terror attack at a Jewish centre in Mumbai. Moshe, now 11, read out a welcome note for PM Modi, saying “Dear Mr Modi, I love you”.

Modi tweeted this moving image during the visit.

It was an emotional moment to meet young Moshe, his maternal & paternal grandparents and Ms Sandra Solomon, his nanny. pic.twitter.com/jI93JBSDp1

Friendships are built on the little things. It is those little things, from basic respect, mutual work relationships, and truly feeling another’s pain that India and Israel find themselves in a relationship that is both ancient and entirely innovative.  This is the partnership that the next phase of world development can and will be built on.