This is a story of a close group of friends bound by fate, adventure, and purpose as they are led down a road they could only have dreamed of.

When I arrived in Tsfat for a summer to study, the rosh yeshiva told me, “You don’t choose Tsfat; Tsfat chooses you.” I arrived at my dorm room and saw a photo of my roommate on the wall. I got goose bumps when I noticed myself in the background of the photo taken at the Kotel. Months before I knew I would ever end up in Tsfat, there was a picture of me on my dorm-room door.

In Tsfat, I experienced many life-changing moments. Most significantly, I was given as a gift Torah CDs about the redemption by Rabbi Shimon Kessin, and I read the book Eim HaBanim Semeicha by Rabbi Yissachar Shlomo Teichtel.

Rabbi Teichtel’s book discusses the precious mitzvah to settle the land of Israel, and the history and future of the people of Israel and their homeland. In the book, he imparts a strong piece of advice that would change my and my friends’ lives forever. He teaches that there is a tremendous amount of blessing stored in the heavens yearning to descend to the world. However, humans don’t receive the blessing themselves; they receive it only through their handiwork. Rabbi Teichtel advises to gather a group of friends who share unconditional love and a common desire to settle the land of Israel, and to create a vessel that can receive the blessing. Whatever entity is created will be guaranteed success and inevitably foster the settlement of the land of Israel. In my eyes, this was a promise from the Torah, and we accepted the challenge.

A close group of friends gathered and founded a nonprofit organization and a brewing company as vessels to receive the blessing. We flew to Israel and sought out land on which to live—and make beer. We found many hidden gems in distressed kibbutzim and moshavim, but were met with nothing but bureaucracy. While in Israel, however, we did find out that two of the Lost Tribes of Israel that had returned to the land—the Ethiopians, believed to be from shevet Dan, and the Bnei Menashe from India—had delicious ancient beer recipes that they were willing to share with our crew. We gained the blessings of the tribal leaders to scale up the beverages and bring them to market.

Shortly after launching our brewing company in the U.S., Lost Tribes Beverage, our team began receiving e-mails from around the world from groups claiming to be from the Lost Tribes of Israel.

The Pashtunim Are Our Lost Brothers

Research from organizations such as Amishav reveals that many tribal names in Afghanistan today are identical to the tribes of Israel: the Ashuri, Rubeni, Gadi, and Yosefzai (zai meaning “son of”), among others. Tribal practices include levirate marriage and cities of refuge, both major concepts of Mosaic Law. These tribes were forcibly converted to Islam, yet maintain their own legal code, called Pashtunwali, that supersedes the Koran. They refer to their collective nation as Bani Israel (the children of Israel). This 2,700-year-old nation resides in a location referred to as the graveyard of empires, as no nation was ever able to conquer them—not Alexander the Great, Genghis Khan, Napoleon, the Soviets, the British, etc.

My friends and I started to search the tribal names on Facebook, making “friends” and inquiring whether the legend was true. Were they the lost tribes of Israel? Almost every time the answer was “Yes, we were told by our grandparents that we are Israelites, and we await the son of David to come and redeem us.”

Throughout the Silk Road, there is evidence of the legends and customs of these tribes from Afghanistan to Japan, the oldest monarchy in the world. The Japanese Empire was founded in 660 BCE. The Israelite exile was said to have happened 722 BCE, just 82 years prior to the founding of the Empire.

We learned that the Japanese claim to have been a chosen nation exiled from their homeland and resettled in the Far East. Their alphabet resembles the Hebrew alphabet. Their holy temple on Mount Moriyah—the same name as the Temple Mount that hosted King Solomon’s temple—contains three chambers: an outer section for people to celebrate, an inner chamber where priests practice animal sacrifice, and an inner chamber with a golden ark on four poles adorned with sculptures of birds, and with three symbolic items kept inside. The priests, called Yamabushi, all wear headgear strikingly similar to tefillin (phylacteries) and blow a horn resembling a shofar.

It was also fascinating to discover that there are large tribes in Africa that claim decent from the Judean kingdom from the time of the destruction of the First Temple. One of those groups in South Africa, the Lemba, practice circumcision, eat kosher, and observe the Shabbat. A professor from Duke University traveled there and did DNA testing on the tribe. His findings were astonishing. They all have Semitic genes, with 10 percent of them having the Kohen gene!

In Nigeria, the Igbo tribe, numbering in the vast millions of people, claim to be descendants of Israelite slaves sold into Africa. Many of the slaves brought to America were from the Nigerian ports. Community activists such as Amar’e Stoudemire of the New York Knicks are very vocal about the roots of the many descendants of the slaves in America. Mr. Stoudemire and other groups collaborate to educate and return exiled communities to their ancestral heritage.

The phenomenon of hidden Jews also stretches into Arabic-speaking communities in Israel, who claim to have been the descendants of forced converts to Islam. They sometimes have tefillin and mezuzot hidden under floorboards from hundreds of years ago, as documented by Tsvi Misinai and written about by the first prime ministers of Israel. They are actually antagonized today by other Arabic-speaking communities, which call them “musta arabim,” the Arabic version of a Marrano.

We pray on the Holy Days for an “agudah achat,” a united community. As well, the prophecies speak of a time when the borders of Israel will greatly extend themselves. The Jewish people regularly chant a song whose lyrics speak about the anticipated time of the stretching of Israel’s borders. We know these expansions will not happen through military conquest, but rather when nations raise their hand asking to be included in the people of Israel. Whether these groups are Jewish or not may be irrelevant. Having hundreds of millions of people identifying with Israel is something that deserves the attention of the Jewish people and forces us to figure out how to best elevate this desire towards global peace and sustainability.

Amid all this discovery and networking, our crew found a wonderful plot of land in the lower Galilee, in the location where Reish Lakish states in the Talmud (Tractate Eiruvin) the entrance to the Garden of Eden might be located. Acquiring it was difficult, but, believing strongly in the promise of Rabbi Teichtel, we decided to move ahead.
When it came time to make the down payment, our team was still empty-handed. With just days left, a descendant of Rabbi Yitzchak Yaacov Reines heard about the struggle and was inspired to lend the money, interest-free. This was miraculous, but we still needed to secure the final payment. With only days left before the payment was due, the pressure was on.

Meanwhile, a tribal leader was elected by the heads of the Afghan Israelite tribes to reach out to the Jewish people and to declare that the time had come for the two groups to begin working together after centuries apart. This message was brought to the Amishav organization—founded at the request of Rabbi Tzvi Yehuda Kook and Rabbi Ovadia Yosef—with which our team was already in discussions about building a social network called iTribe to identify these groups across the globe.

Humbled by the magnitude of this development, we called Rabbi Shimon Kessin, who called an emergency meeting that night. We mentioned to the rabbi that we were having trouble making the final payment on the farm in Israel.
Rabbi Kessin introduced us to an investor and philanthropist who greeted us with open arms and allowed me to make our “elevator pitch.” Thirty seconds in, we were met with a smile and an assurance the deal would close in time. We were graciously granted an additional no-interest loan.

And there it was! A tribal leader from the house of Joseph reached out to the tribe of Judah, and directly stimulated the needed financing to purchase a beautiful farm in the location of the Garden of Eden.

Ezekiel prophesied: “And you, son of man, take for yourself one stick and write upon it, ‘For Judah and for the children of Israel his companions’; and take one stick and write upon it, ‘For Joseph, the stick of Ephraim and all the house of Israel, his companions.’ . . . And say to them, ‘So says the L‑rd G‑d: Behold I will take the children of Israel from among the nations where they have gone, and I will gather them from every side, and I will bring them to their land’” (Yechezkel 37:16–21). 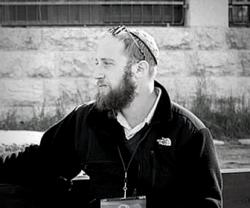 Rabbi Harry Rozenberg is a social entrepreneur who heads iTribe.us, a global platform to connect the Israelite tribes scattered across the world. Harry is considered one of the leading voices backing the reconstitution of a global Israelite family. He also teaches a course on the Lost Tribes (http://www.trio.academy/). All proceeds from the course go to financing Harry's work on the Lost Tribes.

Rabbi Harry Rozenberg is a social entrepreneur who heads iTribe.us, a global platform to connect the Israelite tribes scattered across the world. Harry is considered one of the leading voices backing the reconstitution of a global Israelite family. He also teaches a course on the Lost Tribes (http://www.trio.academy/). All proceeds from the course go to financing Harry's work on the Lost Tribes.