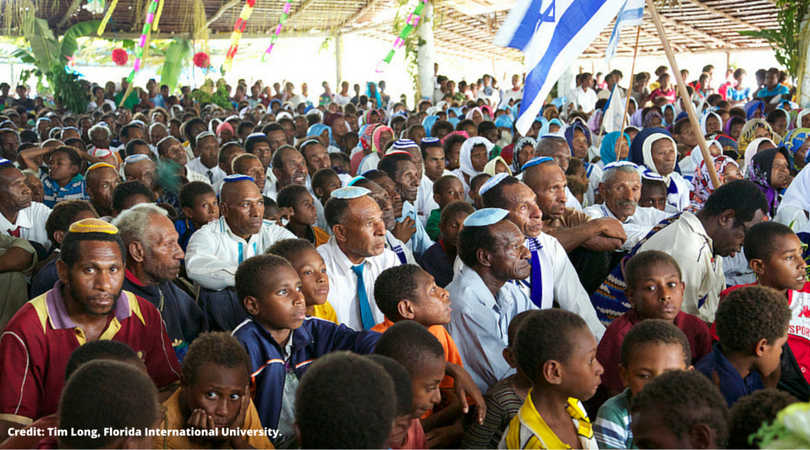 The real and tangible occurrence of the Jewish Revival in Papua New Guinea represents a unique opportunity for both the Jewish people and the State of Israel to both clarify and explore its own roots, priorities, history and religious direction. For on this small island just a few miles above northern Australia there are the rumblings of both a Jewish renaissance and a Zionist mission; there are Jews that had lost their Judaism and now desire to return to their Mosaic roots and tribal peoples that claim their Judaism to stem from the Ten Lost Tribes. There are ancient peoples that anxiously await their return to the Land of Israel and modern Rabbis that have taken upon themselves the task of teaching these tribes modern Judaism in its chiefly Ashkenazi and Sephardic forms. The Israeli government has established relations with the government of Papua New Guinea and Israeli high tech companies have aided the indigenous peoples of this still largely untouched and virgin land.

The story of “Jewish” Papua New Guinea, and how we as Jews and Israelis relate to it, will affect the ancient Jews of Africa and of India, of South America and of the Native Americans in the United States that also claim Jewish ancestry. For this is a story of lost lands and lost peoples, of both ancient and modern Jewish history, of conquests and intermarriage, of polytheism (re)turned to monotheism, of cannibalism turned to humane practices under the influences of modern religion. It is a story of hope and dialogue and fundamentalist Christianity and ancient Judaism, a story of prayer for a better future and a future based on the teachings of the past.

This saga in many ways reflects the struggles of the tribes of Africa that claim ancient Jewish roots or at the very least desire to become one with the Jewish people through identification with the bible and its people. It mirrors the aspirations of groups of peoples from Asia, Europe, Africa and the Americas that, while not always yearning to come home to Israel, most definitely identify with the Jewish people and want to unite with its renewed spirit.
For me, as a Jew, it represents fundamental questions of identity, of an entire history unknown to the average Jew, of a need for renewed definitions of who we are as a people, of empathy for an entire globe of nations that have found empathy towards us with barely a mutual nod back in their direction. It is a type of tshuva – repentance – for ignorance and perhaps even prejudice and it is an opportunity that must not be missed and that has only become possible with the creation of the modern State of Israel.

The Jewish journey back to Papua New Guinea begins only tens of thousands of years after the original establishment of humans on the island, when the first Europeans landed in 1526.  Ironically, it was the Portuguese explorer, Jorge de Menezes, himself a Jew forced into secrecy after the Spanish and Portuguese Inquisitions, who discovered the islands and began its exploration. Other Jews forced from Spain and Portugal during the late 1400s and the 1500s would soon arrive at the island, Jews that had been followed by the Inquisitors from Europe to Peru and on to Japan. From Japan, some made their way to Papua New Guinea.  The Jewish Diaspora includes cousins of distant geography but of shared historical experience. It is entirely possible that some of the Jews of Peru share common Jewish heritage with the modern Jews of New Guinea. There may be ancient Jews in New Guinea as well, but this will be discussed in Part Two.

A member of the Gogodala tribe of Papua New Guinea. The tribe claims to be of Jewish origin. Credit: Tim Long, Florida International University.

These Jews of Papua New Guinea eventually intermarried and found their way to missionary Christianity, with its messianic Message. It is, perhaps, this message that burned within them to find salvation’ albeit not Christian salvation, through a return to their Jewish roots hundreds of years later. But not all became outwardly Christian – some intermarried with native tribes and indeed carried the harsh lessons learned from the Inquisition. To this day, many feel that it is forbidden to enter a church for “it is an evil place”. Some even give their children the name of Sukkot, Torah and Menorah, as recalled in a fascinating article by Rabbi Yossi Serebryanski.

In 2007, then Prime Minister of Papua New Guinea, Grand Chief Sir Michael Somare, stated that his people would always worship the God of Israel and the entire country is full of Israeli flags during the Israel Day of Independence. This is indeed and incredible phenomenon that requires far more study.

The story of the Jewish Return in Papua New Guinea, however, is far more complicated and far more subtle. In Part Two we shall take up the exploits of Professor Tudor Parfiit, known as the “British Indiana Jones”. Professor Parfitt has been exploring ancient Jewish tribal communities for many years and indeed was one of the first to show a Jewish historical link to the Lemba tribe in Africa.

The Jewish Diaspora has left bits and pieces to be slowly and carefully fit together, with waves of Jewish immigration from the times of King Solomon’s trading ships and the later forced migration from Israel of the Ten Lost Tribes, through the Inquisitions, the Dutch East India Trading Companies, the Jewish immigration to America and the modern return to Israel. The Papua New Guineans, both ancient and new, represent a small but significant piece of this puzzle and the modern Jewish confrontation with those that are truly descended from Israel and those that clearly want to become associated. This is a story of ancient and modern, and thus a fitting narrative for the new Jewish Return.